By BRUCE LINDSAY
November 26, 2010
Sign in to view read count 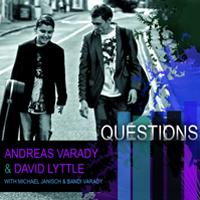 Guitarist Andreas Varady co-leads Questions, his lively and hugely enjoyable debut, with 26 year-old, Northern Irish drummer David Lyttle. Lyttle has plenty of experience for his age: he's one of Ireland's most active and most respected jazz musicians and bandleaders, while Varady is much less experienced—but, then, he is only 13 years old.

Varady, born in Slovakia but now based in Limerick in the Republic of Ireland, is definitely the star of this album. He plays with confidence, skill, obvious enjoyment and a genuine connection to the music. Lyttle brings a wealth of experience in folk music as well as jazz to his relaxed but swinging drumming. The duo is joined by Michael Janisch, an exceptional double-bassist, and Bandi Varady, Andreas' father, who plays rhythm guitar with verve. The musicians play with enthusiasm, and with an understanding that belies the fact that they had played together as a quartet only once before the recording session.

Varady and Lyttle each contribute two original compositions. Varady's "Blues for Edward" is an up-tempo blues, a little reminiscent of Kenny Burrell's style. The young guitarist's playing on the tune is especially fluid and joyful. His "A Day in New York" has more of a George Benson feel to it, with Varady delivering some lovely chordal playing. Lyttle's "True Story" is a relaxed reggae-style number, with Lyttle and Janish creating a warm and engaging rhythm. "Swing Thing," Lyttle's second contribution, is a faster, more urgent tune, with a hint of bop.

The selection of covers helps to demonstrate the quartet's command of a range of styles and offers some intriguing arrangements. John Coltrane's "Giant Steps" is the most interesting: it's taken at a slow and graceful tempo, and opens with a delightful bass and guitar duet from Janisch and Varady. Benson's arrangement of Johnny Mandel's "The Shadow Of Your Smile" is a Varady solo performance, surprisingly mature and controlled for so young a player, and rather beautiful. The too-brief version of Django Reinhardt's "Festival 48" features Andreas and Bandi on acoustic guitars, with both players giving a lovely high-octane performance, driving the tune along at breakneck speed without losing melody or rhythm.

Questions is a delight: fun, accessible, unpretentious and positive. The quartet of musicians is outstanding. Lyttle and Varady are already accomplished players and represent an emerging Irish jazz scene of tremendous potential—hopefully this is just the beginning of two stellar jazz careers.

A Day in New York; Donna Lee; Blues for Edward; Festival 48; True Story; Giant Steps; Swing Thing; Softly as in a Morning Sunrise; The Shadow of Your Smile.