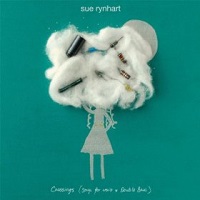 Life is a series of crossings: from ignorance to knowing; fear to courage; love to heartbreak and from one time and place to the next. It's the bare emotions and the mind-sets inherent in such hazy transitions that provide the inspiration for vocalist/composer Sue Rynhart, who is joined here by Dublin-based American double bassist Dan Bodwell in intimate musical communion. The stark setting of voice and bass boldly frames the poetry of Rynhart's lyrics, while the duo explores the rhythmic and harmonic avenues to hand with a lovely sense of controlled freedom.

The music is as unclassifiable as the musicians themselves. Rynhart and Bodwell each has one foot in modern jazz, and another in contemporary music fields that run the gamut from classical to improv. A little bit of all these influences seeps into the songs. Certainly, in Bodwell's thudding bass ostinato and Rynhart's free-from-cliché scatting on a song like "Somewhere to Go" there's a nod to the jazz tradition—albeit a decidedly modern take—but there's a pop sensibility about much of the music as well.

It takes little effort to imagination grungy guitars behind "Wait and See" or a Bjork-like arrangement on the beautifully crafted, arco-buoyed "Wine Dark Sea," with the lines "and in her healing is compassion, and in forgiveness there's relief...and in fear there's a lion and in acceptance there is peace, and the fog passes over the wine dark sea." Rynhart's lyrics are alternatively enigmatic and incisive, and like the best poetry, invite meditation.

Rynhart blurs the lines between spoken and sung narrative on "Sing," repeats a single lyric on the ambiguous "When You Get Home" and improvises freely on "Stones" in a non-syllabic language like tape run backwards. Rynhart's sometimes quirky, adventurous delivery is an important part of her idiom but on the whole it's the haunting beauty of her voice that leaves a lasting impression.

On the serene "Stay Warm" and the semi-unaccompanied, lyrically evocative "The Fourth Lock" a gently folksy air prevails, one that crosses ghostly bridges between early music and Sean-nós traditions. "Penny for your Thoughts," by contrast, is a delightful slice of slow-burning indie-pop balladry. Bodwell's brooding bass lines shadow the rising-falling cadences of Rynhart's voice on the moody "She Has Music," which could yet become, with a little imaginative rearranging, a death metal anthem.

With four of the tracks under two minutes and only one topping the three-minute mark, Rynhart's narratives may be succinct yet they carry an undeniable emotional weight. What's also striking, is the flexibility of Rynhart's vocal approach, which makes each song a fascinating, self-contained journey. Though Bodwell is a significant partner in the dialogue, you could just as easily imagine Rynhart singing these compositions entirely unaccompanied or alternatively with a full backing band. A little of both these scenarios is hinted at in the music, which makes for a compelling aural experience.

In a Dublin music scene that currently boasts a wealth of innovators, Sue Rynhart's wonderful debut positions her as one of the most original and talented of new voices. A name to watch out for.

Somewhere to Go; Wait and See; Wine Dark Sea; Sing; When You Get Home; The Fourth Lock; Stay Warm; Penny for your Thoughts; Emerge; She Has Music; Stones.