By IAN PATTERSON
January 10, 2018
Sign in to view read count 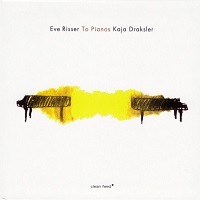 It's easy to forget that the piano is a percussion instrument, so hardwired are out brains to expecting tunes you can hum or whistle from its eighty eight keys. In this work commissioned by Jazz Festival Ljubljana and recorded there in 2016 and 2017, pianists Eve Risser (France) and Kaja Draksler (Slovenia) certainly mine the percussive sonorities of their two pianos but they explore so much more besides. Essentially, the duo's aim in these part through-composed, part-improvised pieces is to pursue and invite pianistic sounds—the reverberations, echoes and humming, the dissonances, timbres, tonalities and, perhaps above all, the moods that sounding two piano's multiple surfaces can conjure.

That's not to suggest, however, that To Pianos is an indulgence pure and simple in abstraction. Far from it. From sombre and reflective to playful and provocative, from abstract and dissonant to carefully structured and harmonious, from tender and romantic to sinister and foreboding -the music—the sounds—forged by the two pianists transmit a broad, ever-evolving range of sensations, which, of course, are open to interpretation. Suffice to say, it's a sonic collage that invites an emotional response.

Though the two pianistic voices are in general terms quite distinctive it's tricky at times to disentangle the concurrent threads woven by four hands. This relative anonymity of the performers seems to be the whole point of the exercise, for although a piano is no more musical than a chest of drawers without a musician's personality to spark it into life, it's the sonic possibilities and variables of the wood, ivory, strings and environmental acoustics when manipulated, rather than individual virtuosity or crowd-pleasing melodies, that are celebrated here by Risser and Draksler.

From the chiming bells-like intro to "Dusk, Mystery, Memory, Community" to the strumming of the piano strings on "To Pianists," and from the resonator-fuelled electronic hum and percussive textures drawn intermittently from strings and piano bodies throughout the set, Risser and Draksler create an imaginative soundscape, one where reverberation and silence, in often minimalist settings, are given time to meet. Yet it's the cut and thrust of the pianist's dialog that renders the most arresting moments, when unison lines gradually slide apart to create woozy mirrored waves of sound, or when doomy bottom end chords punctuate the other's delicate repeating figures at the other extremity of the keys.

Contrasting tones and tensions play just as significant roles as counterpoint and closely choreographed—though generally short-lived—passages. Perhaps the most obvious example of compositional form and individual liberties combined comes with the one non-original, Carla Bley's "Walking Batterie Woman"; here, the duo acknowledges the defining melody yet imposes a highly personal rhythmic structure, one that engenders uninhibited improvisation salvos. The duo saves its most refined and delicate interplay to last on "To You," a spare, neo-classical offering of subtle romanticism.

To Pianos is a tale of four personalities—a coming together of guiding hands and minds in the spirit of experimentation and the responses and possibilities of two pianos. It's a celebration of the piano for sure, though Risser and Draksler will earn all the plaudits for their bold, genre-defying adventure, and rightly so.