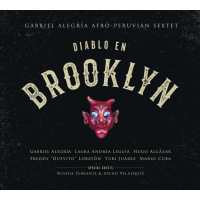 Gabriel Alegria is proud of the first five recordings by his Afro-Peruvian Sextet, but he's more proud of his sixth, Diablo en Brooklyn, than the rest. First, it's his first Sextet release completely recorded in Peru. Second, it reprises in-concert versions of band originals released on previous albums plus a twelve-minute hothouse expedition through the Gershwins' "Summertime," interspersed with a four-movement "Brooklyn Suite" loosely based on the "Son de los Diablos" tradition where mock devils parade through the streets of Lima.

But most importantly, on Diablo en Brooklyn, Alegría explains, "We went back to the essence of the sextet. The six core members. This album represents what Afro-Peruvian jazz music and a bicultural ensemble can contribute to the world." (Yellowjackets keyboardist Russell Ferrante returns from the Sextet's previous, tenth-anniversary release 10 [2015, Zoho Records] for several Diablo guest spots.)

"One of us can phrase a written piece of music differently than it appears on the page and without any discussion someone else can phrase it differently in the same way, in real time. This happens routinely and it's a pretty special thing to achieve," Alegría proudly notes. "We really are as much a family as a band."

There's so much music on Diablo en Brooklyn that your ears hardly know where to begin. Buzzsaw electric guitars pry open the churning, troublesome rhythm of "Caras II," while the "El Norte" guitar plays surrounded by a swirling, buzzing beehive of percussion.

Trumpet sets up and downshifts "Summertime" into a twelve-minute, slow-rolling blues moan which culminates in a trumpet-saxophone melodic duet so purposefully wobbly that it sounds like a pair of drunks singing the night's final tune at last call. Even if you've already heard this Gershwin classic one thousand times, Alegría's reconstruction is a great reason to make it one thousand and one.

The four-part "Brooklyn Suite" turns Diablo from good to great. For "Part 3" (which comes first), Alegría asked electric guitarist Jocho Velázquez to play "as though B.B. King was combined with Oscar Aviles" (one of Peru's folk guitar legends). Velázquez digs into a deep, funky guitar-organ groove with Ferrante, broadly colored by ensemble horns that eventually march to a kettle-ratting drumbeat through the streets of New Orleans.

Powerful, brooding, bombastic yet meticulous (and uncredited) basslines drive the Suite's other three parts and concert performance of "Buscando a Huevito" into more dark and sinister sonic places, and conjure the inscrutable, spiritual moodiness of Charles Mingus.

"We're definitely on a crusade to spread Afro-Peruvian jazz music to the world," Alegría says. "We want it to become part of the language of jazz, and the more we play it and the more feedback we get, the more confident we become that this will be the case."