By DOUG COLLETTE
October 16, 2019
Sign in to view read count
It's altogether plausible to posit Chick Corea's career as one of, if not the most, colorful in all of contemporary jazz. And that very declaration arrives apart from recognition of the varied shapes and sizes of the groups he dubbed 'Return to Forever.' In recent years, apart from notable collaborations on stage and in the studio with the likes of Bela Fleck and Gary Burton, the keyboardist/composer has regularly commandeered his Electrik Band in addition to the group he co-leads with drummer Steve Gadd. And then there are the more pure jazz outings such as those of solo piano and in the trio with bassist/composer Christian McBride and drummer/composer Brian Blade. In 2019, the latter and his latest exploration of his Latin roots have engaged Corea's attention and the recorded evidence suggests each is so fully conceived and executed, a casual listener might be deceived into thinking either one was Chick Corea's forte, not just selected components of his expansive stylistic palette. 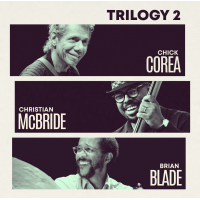 Having fully outlined the expanse of heir chemistry on Trilogy (Concord, 2014), on this sequel Corea, McBride and Blade plumb the depth of their synchrony. And they do it patiently but forthrightly, diving right into some extensive improvisation the likes of which Corea references in his (thankfully) brief, gracious introduction. Nearly thirteen minutes of "How Deep Is the Ocean" and approximately eleven of "500 Miles High" are more than enough to imprint the impression of sparkling audio quality of these recordings as engineered by Chick's long-time engineer Bernie Kirsch, but if there's anything more impeccable than the sonics over the course of these two CD's, it's the choice of material: ranging from Stevie Wonder's "Pastime Paradise" to "All Blues" (juxtaposed for good measure), this trio vigorously avails itself of numerous opportunities to explore nuances of melody and rhythm, their alternately abstract and the fanciful interactions in a proportionate balance that renders the music equal parts accessible and provocative. 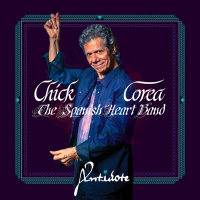 Not surprisingly, even with The Spanish Heart Band in tow, Chick Corea's latest homage to his Spanish Latin and flamenco influences spring from, and are seasoned with, his crystalline acoustic piano playing. Such intervals, even in such truncated form as the less-than-two minutes of "Pas de Deux." serve as foundation for the much more flowery likes of that which dominates this record, not just "Admiration" into which the ensembles immediately segues. Serving as rousing conclusion to a project that is much more than mere dilettantism, this couplet also reaffirms most emphatically how this record transcends pigeonholing as just an extension of previous, similarly conceived such projects as Touchstone (Warner Bros., 1982); the multi-lingual vocals of Ruben Blades on this title song, for instance, are reflective of this whole octet's eloquence while natives of Spain guitarist Niño Josele and saxophone/flautist Jorge Pardo further reaffirm this project's authenticity, on that track, and throughout the other ten that comprise a stylistic adventure with purpose.