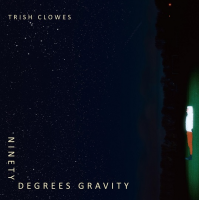 Trish Clowes' stock has risen steadily since her debut, Tangent (Basho Records, 2010), which featured jazz quartet and, on several tracks, orchestra. That record announced a promising and ambitious voice, one equally at home with jazz and classical colors. Since then the saxophonist has continued to explore the meeting of jazz, voice and strings, attracting a growing chorus of admirers along the way. With the critically acclaimed My Iris (Basho Records, 2017), Clowes opted for a more stripped down, jazz quartet language, an approach that likewise informs the even more impressive Ninety Degrees Gravity.

Instantly striking is how attuned the musicians are to one another. In great measure this is down to Clowes' nuanced writing, but it also has plenty to do with familiarity. Guitarist Chris Montague and pianist Ross Stanley—who brings a new dimension to Clowes' music with his painterly Hammond organ textures—have played with the saxophonist as a trio since 2014, while drummer James Maddren, who joined the group in early 2016, has collaborated on and off with Clowes for over a decade. The individual personalities are strong, but the language is one.

From the propulsive opening track "Eric's Tune"—inspired by the former Weather Report drummer Eric Kamau Gravatt—Clowes tilts the music back and forth between taut ensemble lines and looser improvisational passages. Distinctive tunes all, Clowes sews wide-open spaces into the sonic embroidery that invite very personal responses from the musicians: Maddren drives the quartet with invention and brio; Montague weaves bright harmonies with Clowes and then follows his own muse with fluidity and tenacity, conjuring Frisellian soundscapes and more besides; Stanley alternates between dashing pianism and meditative, Sun Ra-esque Hammond waves.

Then there is Clowes' playing—as soft and warm as a summer breeze at one extreme, and freely explorative at the other. Her compositions, sophisticated yet accessible, are characterized as much for the sweeping emotional arc of her tenor lines as they are for her formidable technical armoury. Her softly voiced lyricism seduces on the beautiful "Abbot and Costello," buoyed by Maddren's infectious snare-cum-bass drum pattern. Braying abstraction gives way to patiently probing, then tumbling lines on "Lightning Les," a vaguely psychedelic episode recorded on the quartet's 2018 Irish tour. At her most expansive, on "Free to Fall," Clowes free exploration is infused with a mellifluous playfulness. On the latter, Clowes also sings in a tender homage to the strength in mutual trust, returning later on tenor to mirror the vocal phrasing in a haunting finale.

The slightly fractured, shifting tempi of "Arise" offer a snapshot of the quartet at its most relaxed—yet still open to experiment. With deftly dancing accompaniment from piano and brushes, Clowes carves out a beautifully understated, hymnal solo that disappears all too soon. A similar duality courses through the slow-burning "I.F.," an atmospheric tune that, Stanley's modern beats aside, evokes the bewitching balladry of 1960s-era Wayne Shorter. Clowes, however, is no clone, and rather boldly signs off in an intimate duet with Stanley of highly personal stamp.

Arguably her most assured and persuasive calling card to date, Ninety Degrees Gravity confidently backs up the widely held notion that Clowes is one of the UK's leading jazz lights. A fine recording that's likely to muscle its way into more than a few Best of Year lists.