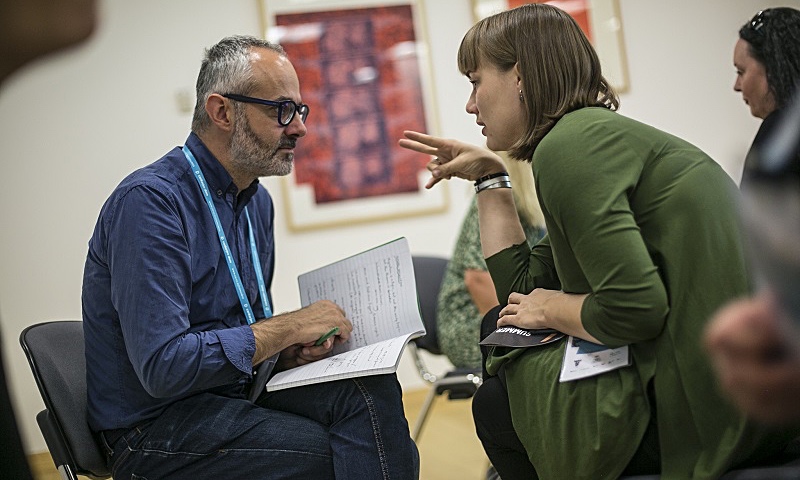 By IAN PATTERSON
October 2, 2017
Sign in to view read count

I don’t think it is a music festival’s job to be a museum of music. Music is an emotional experience…way more than a cultural experience… —Rabih Abou-Khalil

The snow-capped mountains flanking Ljubljana form a natural border between Slovenia and Italy and provided a picturesque backdrop to the 4th annual European Jazz Conference. For the record two hundred and twenty conference attendees [Europe Jazz Network members and guests] the sun shone and the air was cool. The handsome Slovenian capital, with its bicycle-friendly, litter-free streets felt serene as tourists strolled through the old quarter and locals sat al fresco at street-side bars and restaurants.

Yet even the most idyllic scenes can be deceptive.

In Slovenia, as in many other European countries tensions have arisen over the numbers of migrants/refugees arriving every day, many of whom are fleeing the interminable conflicts in Afghanistan, Iraq and Syria. The situation is complex and divisive. Debates over borders and human right are ongoing. Slovenia, however, is primarily a corridor, with the vast majority of these human waves seeking resettlement in third countries.

The very same questions about border controls, humanitarian and economic responsibility—along with rising nationalist sentiments derived from defensive notions of fixed national identities and cultural purity—are common to practically every other country in Europe. So too, the fear of terrorist attacks.

Without exception, for the festival directors, producers, agents, academics, jazz journalists and musicians who congregated at the EJC, these issues do not exist independently from their activities, but instead inform, to a greater or lesser degree, programming decisions, audience development, community outreach projects, research, the economic politics surrounding funding, the subject matter of panel debates et cetera.

Hailing from forty countries including Benin, Mali, Iran, Syria, Turkey, Greece, Azerbaijan, Italy, France, Germany, the UK, Ireland, Spain, Poland, Portugal, Belgium, Norway, Finland and Sweden, the links between them all could be mapped out not just in musical terms, but also in the routes travelled by migrants and political/economic refugees, the insurmountable borders and those that are open, the centres of greatest migrant/refugee concentration and the rise of right-wing politics.

That two of the EJC's three Keynote Speakers had either fled war or effectively became an exile because of war, and that the third uses the arts to counter the socio-political, historical and psychological forces that compel many Africans to seek a better life in Europe, underlined the dominant and inter-related themes of the three-day conference.

Migration, crossing borders (cultural and psychological as well as physical), identity, racism and tolerance, integration and marginalization, language, the yoke of history, cross-border collaborations and political agendas. If it seemed like a heavy load for a conference focused on jazz and related music to embrace, it's worth remembering that these themes pretty much reflected the 100-year history of jazz to date.

The Europe Jazz Network was founded thirty years ago as an association of promotors, presenters, venues, organisations and individuals dedicated to jazz, improvised music and related creative music. Essentially, the EJN promotes the diversity and identity of this music as well as its cultural and educational capital.

At the core of the association's ethos is the belief that this music contributes significantly to societies, not only in economic terms, but also as a force for social and emotional growth and as a conduit for promoting harmony and inter-cultural dialog between the diverse peoples and cultures of Europe -a fact, incidentally, that has been recognized by UNESCO.

It's a case of do as I do, for as Maja Osojnik—one of the Slovenian Showcase Festival musicians said to the EJC attendees in the audience on the first night of the showcase concerts: "It feels really like one big family, observing how you guys talk to each other. It's a nice feeling." The harmonious, family-like vibe of the EJC engenders a proactive, 'can do' philosophy that results in practical and meaningful collaborations, from the sharing of ideas and good practises and the co-commissioning and co-touring of artists, to research projects such as the monumental History of European Jazz project—an unprecedented 660-page opus due for publication in 2018.

As of 2017 the EJN boasts 112 members and the number is growing year by year. Significantly, the EJN has opened its borders to non-European organisations for the first time, with Tel Aviv Jazz Festival and—just two days prior to the EJC 2017—the Australian Music Society becoming two of the most recent members.

The EJN, inevitably, has evolved over its first thirty years. So too has jazz and so too the geo-political map of Europe. A lot of these changes were reflected in the discourses and dialogues of the EJC 2017, with the past casting almost as long a shadow over the three days as current events.

During the preliminary greetings to the 220-strong audience in the main sala of the Cankarjev dom EJN staff member Giambattista Tofoni explained the contents of the EJC shoulder bag gifted to everyone. Whist the eye-patch and the neck brace were clearly both sleeping aids Mr. Tofoni didn't clarify if a mass outbreak of snoozing was anticipated. The plastic container, however, was no mere water bottle. "You can put in it anything you want," Mr. Tofoni revealed.

This bold statement could also have served as a metaphor for jazz, for during the three days of the EJC, concert after concert underlined just how far-reaching jazz/improvised vocabulary has become.

Since moving from the ex-Yugoslavia [Serbia] to France in the late 1988s, Bojan Z has carved out a niche as an exponent of Balkans folk-flavored jazz. For this concert, the pianist was joined by Slovenian musicians, though it was with an extended solo exhibition that Bojan Z began, launching off with the percussive intro of "Full Half Moon" from Soul Shelter (EmArcy, 2012). This thirteen-minute solo spot was laced with Balkan motifs and ornaments, alluding also to classical music and the influences of Don Cherry, Thelonious Monk and Keith Jarrett. Bojan Z's very own brand of world music was tender and dramatic in turn, his flowing narrative underpinned by dancing rhythms.

Goran Bojčevski on wooden flute (a kaval, widespread across the Balkans) then joined Bojan Z in a duo performance of one of Bojan Z's traditionally inspired tunes. The flute has a long history in Slovenia, for just a stone's throw away, the National Museum of Slovenia displays what is claimed to be the world's earliest flute, the holes carved into a bear's femur that dates back 43,000 years.

Bojčevski's quintet of Tadej Kampl (bass), Tomaž Marčič (accordion) and Ziga Kozar (drums) then swelled the ranks. Given that the musicians had first played together at the rehearsal earlier in the day, it was perhaps understandable that solos dominated, with the Slovenian leader's clarinet bringing a klezmer air to Bojan Z's dashing "Debacle Presidential." The brief, twenty-minute collaboration came to an end just when you felt the band was really warming to the task.

Lebanese-born, French based oud player Rabih Abou-Khalil has long straddled musical borders, with jazz, fado, French musette, blues and poetry just some of the threads entwined with his Arabic roots. Abou-Khalil was joined by Jared Cagwin on percussion and Luciano Biondini on accordion, a trio whose collaborations date back twenty years. The fiery "When Frankie Shot Lara" saw Biondini and Abou-Khalil deliver impassioned solos, with Cagwin's visceral rhythms stoking the flames.

Abou-Khalil has long enjoyed hanging comical titles on his compositions and "Crisp, Crap Coating"—a riveting number inspired by Finnish cuisine—was no exception. Yet the humour—and Abou Khalil could easily double as a stand-up comedian—could not mask the serious art in his compositions nor the mastery of his instrument; Abou Khalil is to the oud what Paco De Lucia was to the Spanish guitar.

The love song "If You Should Leave Me (Si Tu Me Quittes)" and the powerful lament "Dreams of a Dying City" highlighted the emotional depth in Abou-Khalil's pen. The latter, originally written for Beirut during the civil war, could today serve as a heartfelt cry for far too many cities throughout the Middle East.

Riffing oud and driving percussion colored the final number, with Biondini leaving his best to last with a wonderfully fluid solo. Abou-Khalil's ensembles small and large, however, have always been about the collective voice as this beautifully balanced concert, powerful yet elegant, amply demonstrated.

In a hugely entertaining and wide-ranging Keynote speech, Rabih Abou-Khalil touched on themes including early musical influences, migration, music as an expression of self, and reading copies of Das Spiegel in a Beirut basement for two years while the bombs fell. And, through medium of a simple, yet colorful parable, he suggested how better linguistic skills could potentially bring an end to all human conflict.

Growing up in Beirut, Abou-Khalil's first encounter with music from the West came in the shape of Frank Zappa, Thelonious Monk and Tom Jones. How different About-Kahlil's path in life might have been had he been seduced by Welsh crooner Jones instead of Zappa and Monk.

Abou-Khalil abandoned war-ravaged Lebanon in 1976. "I couldn't muster enough anger or hatred against any other group to stay there and participate in the war." This pacifism he attributed to growing up as an atheist in a country hosting nineteen religions—each one proclaiming the truth. His move to Munich, classical music studies, his brief flirtation with ECM and his fascinating solo career have been well documented over the years. Less well known perhaps, was the reaction he received as foreigner in late 1970s Germany: "People would actually stop talking when I entered a shop and look at me—this dark person."

It's remarkable to think how, in just the lifespan of the EJN, European cities have become so much more cosmopolitan, to the point that it's hard to imagine what would make heads turn these days. "Everything has changed a lot," Abou-Khalil acknowledged. "Now when I open the door nobody even notices I'm in the room. People can't even remember those times."

Those times. These times. The question of belonging, identity, racism, integration and inclusion are as relevant today as they ever were. These salient issues were central to the main debate of the EJC 2017, which followed on from Abou-Khalil's keynote speech.

Plenary Debate: Where to begin? Social Inclusion in Cultural Policies

The plenary debate—moderated by the EJN's Francesco Martinelli—brought together Rabih Abou-Khalil, Anusa Pisanec (music journalist and development worker), Mehdi Marechal (expert in cultural participation and interculturalism), and N'toko (experimental hip-hop artist and producer). This imaginatively assembled line-up, which offered the promise of lively and stimulating debate, did not disappoint.

The major theme of social inclusion—seen primarily through the prism of festivals—included the politics surrounding the targeting of audiences, ticket affordability, institutional racism and the stereotyping/marginalisation of minority groups.