Born in Spoleto in 1971, Luciano Biondini started studying the accordion seriously at age 10. He has been awarded many prizes for classical accordion, e.g. Trophée Mondial de l'Accordéon and Premio Internazionale di Castelfidardo. Since his turning to jazz in 1994 Biondini has played with the likes of Rabih Abou-Khalil, Dave Bargeron, Michel Godard, Battista Lena, Gabriele Mirabassi, Enrico Rava, Tony Scott and many others. A true master of his instrument and a soloist with an overwhelming dramaticism, he always adds something beautiful and original to any context he works in.

His duet partner Javier Girotto was born in 1965 in Argentina (of Italian ancestors) where he studied Argentinian and Italian music in his early years. At age 22 he went to Boston, USA and graduated from Boston's Berklee School of Music “cum magna laude” in 1990. He then went to Italy where he founded and led the ensemble “Aires Tango”. He also worked with big names from world music and jazz, e.g. Anouar Brahem, Randy Brecker, Paolo Fresu, Enrico Rava, Mercedes Sosa and Gianluigi Trovesi. In his playing Girotto combines technical virtuosity, folk melodicism, the drama of the tango and the fire of jazz.

As a duo, Luciano Biondini & Javier Girotto have been a successful live act for quite a while. A charming crossing between a jazz band and a chamber music ensemble, the virtuosic duo explores folkloristic gestures, tango feel, free- wheeling improvisation and neo-classical sounds. Sometimes thoughtful, sometimes cheerful, sometimes ecstatic, they unfold a wide spectrum of moods and colors, thus acting like an orchestra en miniature. An Austrian concert review read: “An extraordinary pleasure. The melancholy of the tango meets the lightness of the European south. The moods of this dialogue change between a soft 'chat' and loud, almost nervous musical arguments... a very playful, nearly comedian matter.” - “Terra Madre” is their first album as a duo and presents 12 highlights from their book, all originals.

Buy One CD, Get the Other for Free Feat. Mark Turner, Dave Binney,... 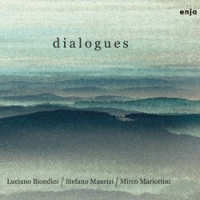 All About Jazz musician pages are maintained by musicians, publicists and trusted members like you. Interested? Tell us why you would like to improve the Luciano Biondini musician page.