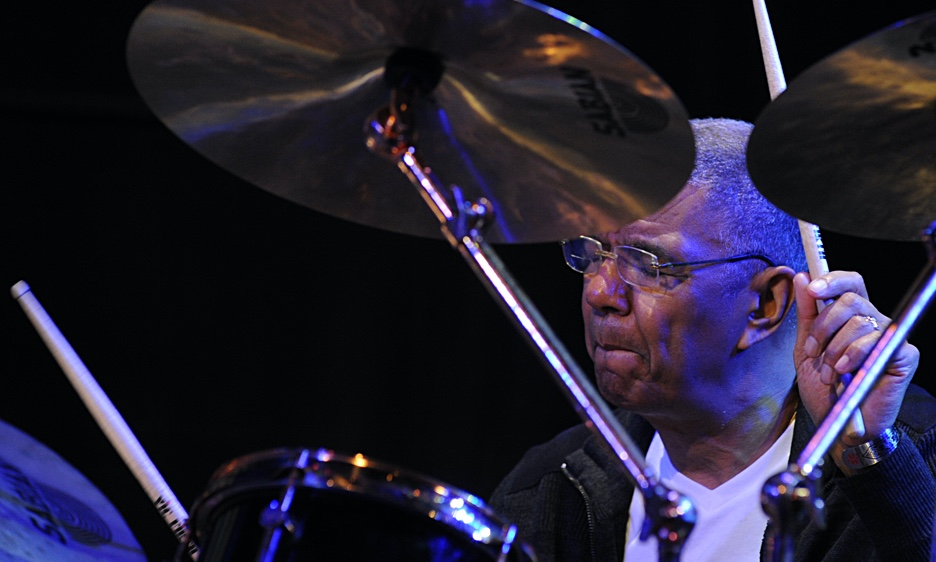 On the 1st and 2nd of November 2019, Jazz at Lincoln Center commemorated the 50th anniversary of ECM Records with two nights of musicians—many longtime associates, some newer additions—from the label's roster. More than that, it was a celebration of life itself during a time of great sociopolitical unrest, when hearts and minds around the world ache under the weight of uncertainty, and when the art of sound can be relied upon as one of the few constant spaces in which love may flourish without getting tangled in the bramble of ideology.

Such themes hovered in the background of a preconcert talk with pianist Ethan Iverson, fresh off the release of Common Practice, which documents a beautifully dictated collaboration with trumpeter Tom Harrell. The past was just as close to mind as the present, as Iverson spun a skeletal yet strong-tendoned narrative of ECM's intervention in the world of postwar jazz. At that time, American musicians like Mal Waldron (whose Free at Last would be ECM's first release), were skipping over the pond into Europe, where the proverbial waters had been smoothed in anticipation of their ripple effect. Primary among those tracing their concentric circles as far as they could go was a young Manfred Eicher, whose interest in labels like Deutsche Grammophon— labels, that is, with an aura—blossomed into what became his defining independent project. Eicher, said Iverson, had "a magical sense of what would work," a "perspective" that has left its fingerprints on more than 1600 productions.

ECM has always been possessed of a spaciousness that Iverson sees held together by a conceptual—even reactionary—thread. This isn't to say that Eicher hasn't welcomed a staggering range of genres, artists, and temperaments into his sphere of influence; only that musicians express themselves differently in the presence of Eicher, his engineers, and favored equipment. ECM is as it was, and was as it is, because it must be nothing other than itself. For the same reason that people played a certain way for Alfred Lion at Blue Note, so they do for Eicher. Equal to his creative input has always been an ability to tap into relevance, synthesize the unexpected, and make it all feel organic at every level. Iverson pointed out, for example, how, as minimalism took hold in the 1970s, soon-to-be label stalwarts like Keith Jarrett applied that droning, hypnotic sensibility to music that frayed the edges of what jazz could be. It was perhaps only a matter of time that Eicher should shift into classical proper, introducing the likes of Steve Reich, Arvo Pärt, and Giya Kancheli to a listenership starving for those messages, and why Jarrett would be invited to participate in Pärt's Tabula rasa, the first of Eicher's classical "New Series" imprint. Here was a sound whose only home could be ECM.

One more thing worth mentioning before we get to the concert: Eicher's emphasis on personal relationships, kindred passions, and shared knowledge. For no matter which door you chose to step through when entering the realm of ECM, you can be sure to find on the other side of it a gallery lined with portraits going back centuries. Iverson, for his part, counts his love of Paul Bley as bringing him and Eicher together, and on that connection founded an ongoing conversation that has unlocked some of the profoundest impulses yet to flow from Iverson's fingers. In this sense, Eicher is more akin to a filmic auteur than a standard figurehead, someone who does what he likes, how he likes it, and who appreciates the value of telling a complete story from start to finish.

Such cohesion was evident throughout the self-styled "broad panorama" to which we were treated. If the three-and-a-half-hour program could be likened to a specimen under a microscope, then one can be sure that every pair of ears in that room spliced it differently. On the retrospective surface were two quintets of recent vintage. Trumpeter Ralph Alessi welcomed his Imaginary Friends collective to the stage. With saxophonist Ravi Coltrane, pianist Andy Milne, bassist Drew Gress, and drummer Mark Ferber, he uncorked the exuberant theme of "Iram Issela," navigating a landscape of prepared piano, patient development, and improvisational sincerity. Another memorable quintet, spearheaded by fellow trumpeter Enrico Rava, made reference to 2019's Roma. Surrounded by saxophonist Joe Lovano, pianist Giovanni Guidi, bassist Dezron Douglas, and drummer Nasheet Waits (taking the place of Gerald Cleaver, who appeared on the record), Rava regaled with his unmistakable poetry in the original "Interiors," while Lovano's "Fort Worth" birthed its own enlivenment. In both tunes the two frontmen balanced effortlessness and hard labor, while Guidi and the rhythm section unleashed a sun flare of support. It was delightful to see Rava in this rare stateside appearance, not only for his playing but also for the way he watched and listened to his bandmates with such appreciation.

Going one layer deeper brings us to trumpeter Avishai Cohen with pianist Fabian Almazan, bassist Barak Mori, and drummer Ziv Ravitz. In their rendition of Cohen's "Will I Die, Miss? Will I Die?" from 2017's Cross My Palm With Silver, the quartet paid tribute to the plight of the Syrian Kurds. Adding to the relevance of their flowing performance was Cohen's spoken word reading of "Farewell" by Israeli poet Zelda (1914-1984). "It is necessary to believe in departure," he began, and went on to examine separations as chances for unity. Another layer, and we find ourselves at the altars of four very distinct trios. First was that of Lovano, pianist Marilyn Crispell, and drummer Carmen Castaldi, who rendered two selections from the saxophonist's first ECM leader date, Trio Tapestry. While the amorphous yet biologically coherent "Seeds Of Change" was astonishingly free, even "The Smiling Dog" resolutely resisted the urge to swing while somehow staying in the pocket at any given moment. Crispell separated the longest strands of genetic wisdom, turning each into a species in its own right. Drummer Andrew Cyrille, trumpeter Wadada Leo Smith, and guitarist Bill Frisell countered with two from 2018's Lebroba. Theirs followed a likeminded trajectory, starting in the watery omnipresence of Cyrille's "Pretty Beauty" before toweling off in the explosive yet strangely comforting free improvisation, "TGD." Pianist Shai Maestro, bassist Larry Grenadier, and Waits gifted us with "Hank and Charlie," a freely branching, modal affair that went from one heartwarming transition to the next without missing a single gradation. But it was the trio of drummer Jack DeJohnette, electric bassist Matthew Garrison, and Coltrane that yielded some of the most tactile music of the first set. Even more vibrantly than on their 2016 album In Movement, they enacted an experience of geological proportions. DeJohnette's sticks were the voice of the earth, eventually locking step with Garrison as Coltrane switched out tenor for sopranino in stratospheric lucidity.

Removing yet another layer yields two duos. Iverson and saxophonist Mark Turner, whose 2108 Temporary Kings made for a gorgeous addition to the ECM catalog, performed the pianist's "Showdown," which out of rumbling beginnings molded a fully three-dimensional sound. Across the pianistic stationery of Iverson's keyboard, Turner wrote a most soulful letter in the language of mutual exclusion. Frisell's simpatico connection with bassist Thomas Morgan was on humble display in their version of Paul Motian's "It Should've Happened A Long Time Ago." With interlocking asymmetry and a windswept quality like no other, their intimacy of communication was luminous yet dusty. Pianist Vijay Iyer and Smith again on trumpet revived the enchantment that characterized 2016's a cosmic rhythm with each stroke by turning the stage into their own ritual territory. Iyer straddled the electro-acoustic divide between two instruments, and Smith between muted and unbridled voicings. Quiet impulses spoke of messages traveling vast distances to reach us, while more forthright communications etched the night in the language of day. This was outer space as inner space.

All of which leaves us with the concert's unforgettable solo appearances. Brazilian composer and multi-instrumentalist Egberto Gismonti opened with two pieces on piano. What began as a tender ballad soon revealed a dancing memory—if not a memory of dancing. In the second tune, the keyboard was his home movie screen, splashing like a child into a river. Grenadier nodded to his first solo bass recording, 2019's The Gleaners, bringing his virtuosic archaeology to the fore. Nik Bärtsch, more commonly associated with his funkier Ronin outfit, played "Modul 5," which found the Swiss pianist activating the inner strings in a leitmotif of emotional reset, and from the apotheosis of a single note extracting countless alternate futures. Also at the piano was Craig Taborn, whose sporadic reflections led to a proliferation of ideas. With an intensity equal to, if different from, Bärtsch's, he treated every chromatic arpeggio as a mountaintop from which gray matter might tumble in any direction. Most poignant of all, however, was Meredith Monk, who dedicated her "Gotham Lullaby" to the very world we live in and to the memory of ECM's prematurely extinguished light, Collin Walcott. In every ululation and breath between she wrapped her fingers around the voice of humanity at large, inflating lungs of prudence and exhaling only peace. Anja Lechner gifted us with the final solo. The German cellist began with a harmonically infused improvisation that phased into the Prelude in d minor of Carl Friedrich Abel. With a touch of bow and flesh rarely felt on the cello, her performance was a reminder that all notated music comes from a place of spontaneous creation, and that all spontaneous music could be nothing other than what it becomes.

In addition to all the melodies, it was wonderful to hear the musicians applauding each other backstage after every performance. This sense of camaraderie and respect was proof positive of a family who would never have existed as such without Eicher's guiding hand, and of our privilege in being welcomed into it to not only join in the conversation but also keep it going.