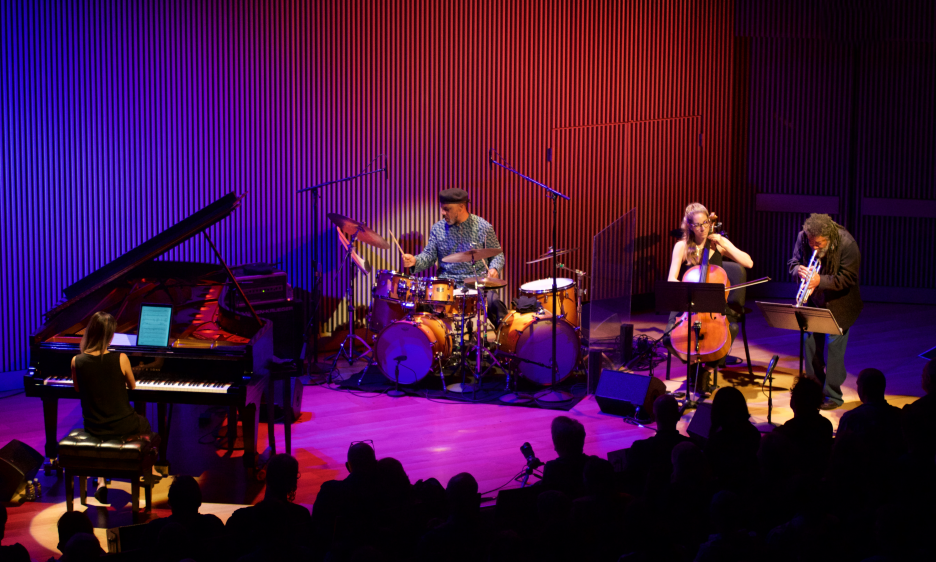 The label has long been known for its tasteful covers and adventurous offerings, including artists such as Keith Jarrett and Meredith Monk. In recent years, ECM is also giving us some superlative music—through an occasional series of concerts dubbed "ECM Fest." A number of these have taken place at SFJAZZ in San Francisco. In 2015, it afforded an opportunity to see, among others, the then 73-year-old avant-garde trumpeter Tomasz Stanko who died last year. This time around the series offered a stellar lineup over four nights in two auditoriums. This writer was privileged to attend three of these performances.

Thursday night was a very special night for it featured Tigran Hamasyan's second appearance at the venue. Composer David Bruce writes: "Tigran Hamasyan's music is full of impossible rhythms that are very hard to unpick, even for experienced musicians." Accordingly, although it is difficult to do justice to in print, his musical performances are a delightful experience for the listener.

Hamasyan, an Armenian born musician, incorporates jazz rhythms and melodies into his compositions which are reflective of Armenian folk music. Taking the stage, his hair in a bob and dressed all in black, he plunged into "Fides Tua," a lyrical piece with intricate constructions which gives the feeling of traveling. His music incorporates his Korg synthesizer (with which he fiddles like an alchemist), which is placed to his left and supplements his acoustic piano. His voice also adds to the mix.

Next up was "Flute Eternal," which had Hamayasan bent over the keyboard as though conjuring up a memory. The pace slowed to meditative, as he plucked the strings in the piano as he played with his right hand.

The evening took a different turn when Hamayasan introduced his co-star for the evening, vocalist Areni Agbabian. The stately Agbabian, who has been touring with Hamayasan since 2009. Her work might best be likened to that of Meredith Monk, but there is no true comparison, and she is the type of eclectic, uncategorizable artist that ECM is known for. Together, they performed tunes such as the eclectic, pondering, contemplative and melancholy "Leninagone," dedicated to all of the children affected by the earthquake which devastated his home town of Gyumri (Soviet name: Leninakan) on December 7, 1988, and "An Ancient Observer," the title of his eighth album (Nonesuch, 2017), before returning to the stage, following a standing ovation, with "Longing" and "Tsirani Tsar" (a traditional Armenian folk song, rearranged by Tigran and Agbabian).

Friday night saw a performance by two stalwart trumpeters of the jazz scene. Wadada Leo Smith presented his Golden Quartet. An avant-garde trumpeter, Missisippi-born Smith is noted for his work with the likes of Leroy Jenkins, Anthony Braxton}}, Malachi Favors and other icons of the field. After converting to Rastafarianism in the 1980s, he added Wadada to his name.

With pianist Dohl on the left, Smith stood next to cellist Walters; drummer akLaff was behind her. Smith soloed before giving room for Dohl to solo, which then led into Walters interfacing with akLaff. Dirge-like piano was accompanied by akLaff's cymbals. Smith put a mute on his trumpet to play, and then akLaff soloed. The set continued this way, with each performer allowed ample room to solo.

In direct contrast to Smith, trumpeter Avishai Cohen's ensemble was all male— composed of Yonathan Avishai on piano, Barak Mori on bass, and drummer Ziv Ravitz. The Tel Aviv-born Cohen has been greatly influenced by the late superstar trumpeter Miles Davis, and his take on the trumpet contrasts dramatically with that of Smith.

During his compelling and dynamic set, Cohen pumped his trumpet's valves rapidfire. Avashai offered some wonderful extended solos; Ravitz provided a taut back beat, offering some intent stick work; and Mori During the set, Cohen thanked both ECM and SFJAZZ for his invitation. The set ended with a Cohen's recital of Israeli poetess Zelda Schneurson Mishkovsky (1914-1984) poem which Cohen said represented "reflections of my inner nature." The evening ended with a standing ovation.

Sunday evening marked the return of the wonderful Egberto Gismonti to SFJAZZ.

Red-kerchiefed and with a voluminous pony tail, Gismonti sat down and launched into an extraordinary hour in the company of his special 10-string guitar. The original violão de sete cordas, the Brazilian seven-string guitar, was introduced to Brazil in the late 19th century, and has long been a feature of both choro and samba music. (Gismonti also plays frevo music). Weaving all sorts of melodies together, he held the audience firmly in his musical trance, ending the set with "Frevo." Throughout, he employed his characteristic technique of thumping on his guitar, weaving percussive waves of sound. As he did in his last appearance, he moved from the guitar to piano, splitting his set between both instruments.

Gismonti has a fascinating biography. A self taught guitarist, he was raised by a Sicilian mother and a Lebanese father. He moved from fifteen years of studying piano at the Brazilian Conservatory of Music (from the tender age of six) to Paris, where he moved from classical to contemporary. Returning home, he improvised his own guitars, transposing his piano skills to the instrument. Listening to him, it often appears that there is more than one guitar on stage. His time in the Amazon basin with its indigenous residents and his collaborations with Brazilian musicians and such jazz luminaries as Nana Vasconcelos, Charlie Haden and Jan Garbarek also, undoubtedly, contributed to his repertoire.

Sadly, his comments to the audience were not miked, and so proved difficult to hear. This was the only downside to an otherwise stellar concert. It came as no surprise that Gismonti received a standing ovation. In a world of sound-the-same, predictable musicians, there is no one quite like him.