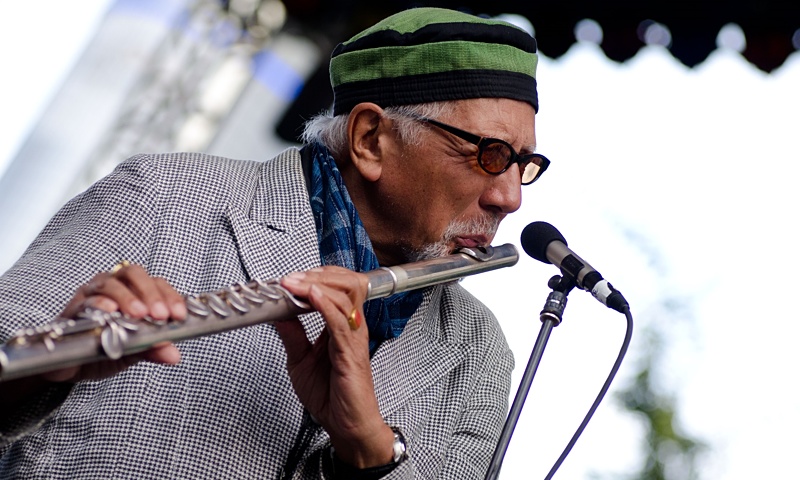 By C. Andrew Hovan
September 17, 2013
Sign in to view read count
2013 Detroit Jazz Festival
Detroit, Michigan
August 30-September 2, 2013
Summing up the modus operandi that seemed to characterize so much of the performances at this year's Detroit Jazz Festival, one might sagaciously go with the phrase 'wild abandon.' Now in its 34th year of existence, the festival still boasts the title of "largest free jazz festival in North America." Musician Chris Collins in his sophomore effort as artistic director continues to hone his skills in putting together this cumbersome smorgasbord of delights. As such, things continue to evolve and change, some for the better and some for the worse. The theme-based or tribute performances are often a mixed bag and the scheduling of sets in similar genres at the same time continues to frustrate those wishing to see more than a tune or two before whisking off to another venue. Still, what makes this festival work are the varied opportunities to hear working bands stocked with New York's finest.

From the get-go, Friday night's opening performances were all about a loose sense of collective exploration. Up first was this year's artist-in-residence, Danilo Pérez, leading an ensemble he calls Panama 500. Joining the pianist were Alex Hargreaves on violin, bassist John Patitucci, drummer Adam Cruz, and two percussionists. The music was long on musical probing and short on cohesion. Often when the ensemble seemed to hit its stride, Perez would follow up with a new tangent, taking things in yet another direction. The most remarkable moments came when the groove had time to establish itself, buoyed by conguero Roman Diaz, whose vocal chants provided the ultimate stamp of authenticity. 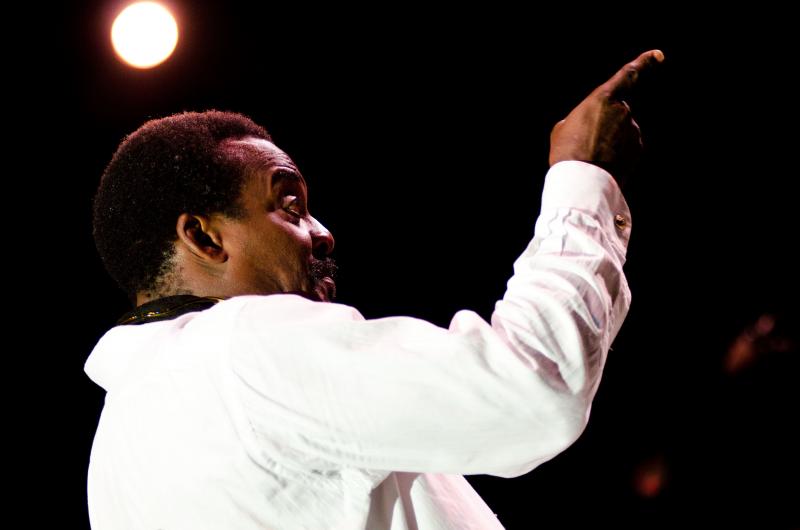 Leading his big band composed of ten horns and a four-piece rhythm section, saxophonist David Murray's truncated set began with the communal roar of "Stressology." Wildly loose and somewhat sloppily performed, the overall effort benefited from the solid bass foundation provided by Jaribu Shahid and the kinetic energy of drummer Nasheet Waits. Vocalist Macy Gray's histrionics are somewhat of an acquired taste and her animated delivery marked the three numbers she performed with the band. Then, in the midst of "Talk About Jesus," the skies opened and a flash of torrential rains brought a quick end to the evening's performances, sending droves of listeners scrambling for cover.

Saturday's schedule included a rarity for this festival, a chunk of time spent at one venue, in this case the Carhartt Amphitheater, with limited stage hopping involved. Renee Rosnes and Bill Charlap brought their musically satisfying duo to the stage replete with two concert grand pianos. Everything about the presentation was classy, as was an inspired take on Monk's "Off Minor." Up next, the Mack Avenue Superband lived up to its moniker, highlighting the compositional talents of its members. Sean Jones provided the lovely waltz "Mars and Venus" and newcomer Aaron Diehl's "Blue Nude" was a fabulous showcase for this immensely talented pianist.

One of the highlights of the festival, the Mack Avenue showcase featured the legendary Gary Burton in duet with young phenom Warren Wolf. The pair, on vibes and marimba, coalesced on Wolf's fine arrangement of the iconic "Senor Mouse." Another memorable moment from this set would be Kirk Whalum's 5/4 groove on the spiritual "I Want Jesus to Walk with Me." 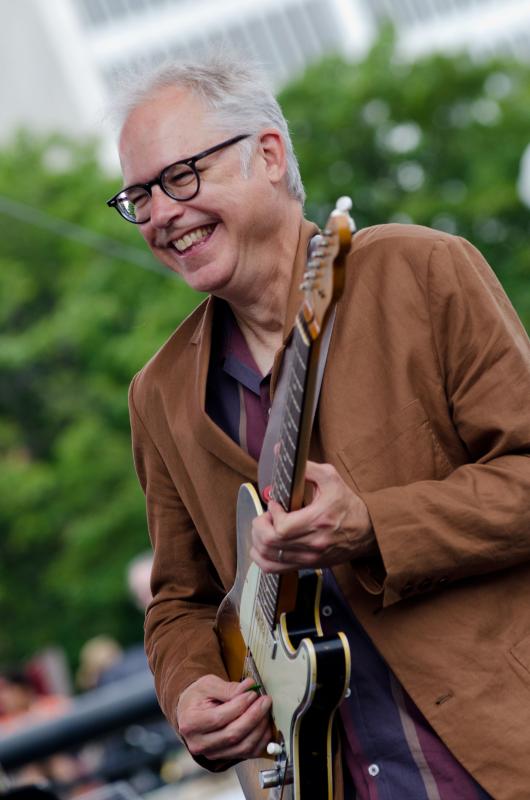 Elsewhere that afternoon, Charles Lloyd and friends, including Bill Frisell, Reuben Rogers, and Eric Harland, played a transcendent set over at the JP Morgan Chase Main Stage. Earlier in the day, pianist Michael Weiss brought his band of New York cats to the Absopure Pyramid Stage where he played his original compositions with the valuable assistance of saxophonist Wayne Escoffery, bassist Ugonna Okegwo, drummer George Fludas, and percussionist Daniel Sadownick. Escoffrey voiced the robust tenor melody for the loping "Power Station," while Sadownick and Fludas locked in tight for the fast clip of "Orient Express," a tune somewhat akin to Coltrane's "Giant Steps."

As the evening started to wind down, it was time to face the fact that in choosing to see B3 firebrand Tony Monaco wrap things up at the Pyramid also meant that there would only be time to hear a few tunes by McCoy Tyner back at the Amphitheater. Even at the age of 74, Tyner still plays with a molten fire that, in this case, was aided and abetted by bassist Gerald Cannon and drummer Francisco Mela. By the time special guest Savion Glover made it to the stage, Monaco had already started to heat things up next door.

Although his choice to make Columbus, Ohio home base makes Monaco a talent just under the radar for many, make no mistake in putting his name on the list of modern day organ masters. In a trio with guitarist Fareed Haque and drummer Makaya McCraven, Monaco purveyed the history of the instrument from downhome blues to gospel strains straight from the pulpit. Not afraid to literally pull out all the stops, the organist picked the best combination of tonal colors to suit each piece. Of the many highlights, a run through Jimmy Smith's "Root Down" was particularly choice, including a Haque solo that bordered on the microtonal at times.

All bets were off on Sunday when I came to running a game plan that would avoid the pitfalls of missing one or more favorites. One couldn't miss though in starting off the day with a tribute to Detroit's own Pepper Adams. With a front line of three baritone saxophones including Gary Smulyan, Howard Johnson, and Frank Basile, the ante was upped even further by utilizing a rhythm section consisting of Michael Weiss, Ray Drummond, and Joe Farnsworth. Tunes such as "Binary," "Chant," and "Witches Pit" served as great vehicles for the horns. Plus, a lovely ballad medley included the Ellington numbers "Lotus Blossom," Chelsea Bridge," and "Sophisticated Lady." 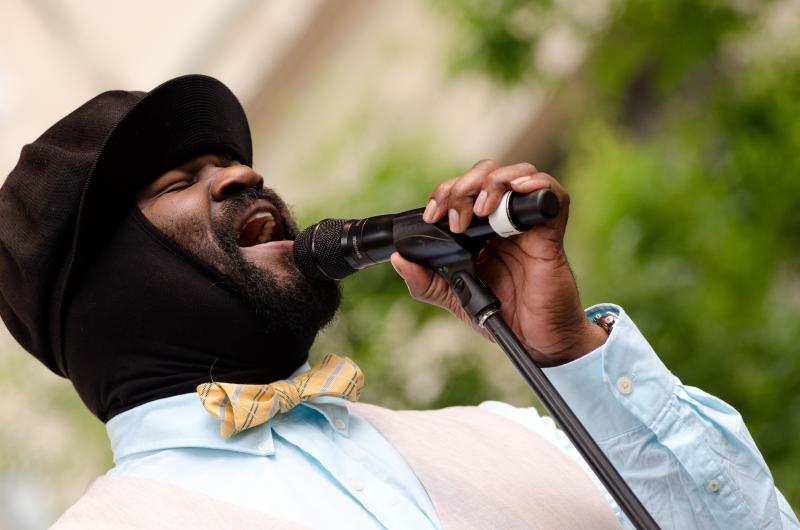 Although the critical accolades have been plentiful, Bill Frisell's exploration of the music of John Lennon in Detroit was only a modest success. The mood was too psychedelic and generally slow-paced for anything much to catch with listeners. The twang of violin and pedal steel guitar seemed also somewhat of a rare delicacy, heard best in smaller doses. The jury also seemed to be out on Gregory Porter the much lauded new vocalist who could be found along with his band at the Main Stage. While Porter has great chops and wonderful stage presence, his original material is somewhat uneven save for the catchy "1960 What?" which recalls Gil-Scott Heron in his heydays. Arguably, it can be suggested that while Porter surrounds himself with a talented cast of musicians, their contributions were solely workmen-like in character.

Formed back in 1977, the band Yellowjackets has consistently straddled the lines between pop fusion and more jazz-based sensibilities. With the recent departure of Jimmy Haslip, the only original member to remain is keyboard man Russell Ferrante. The band was in fine form at the Main Stage Sunday evening with all eyes on Felix Pastorius who has filled the chair vacated by Haslip. The son of Jaco Pastorius, this newest member of the ensemble refreshingly has developed his own bass voice apart from his father. Favorites of the set included "Claire's Song" and the traditional swing of "Song for Elvin."

Back at the Amphitheater, the crowd was anxious for the homecoming of Detroit's own Sheila Jordan. The 84-year-old singer was to be matched with a string section and the piano trio of Alan Broadbent. As she made her way to the microphone, Jordan spoke with an ageless sense of enthusiasm and her vocals remained ever poignant. Opening with "Haunted Heart," Jordan took the audience through a set replete with nostalgia and genuine magic. By contrast, the night was finishing up over at Campus Martius with the loop-based grooves of John Scofield and his Uberjam band featuring Andy Hess, Avi Bortnick, and Tony Mason - Drums. While the emphasis was on samples and beats of the funk variety, Scofield dipped into his bag of blues and other tricks as he ripped off one hot solo after another. 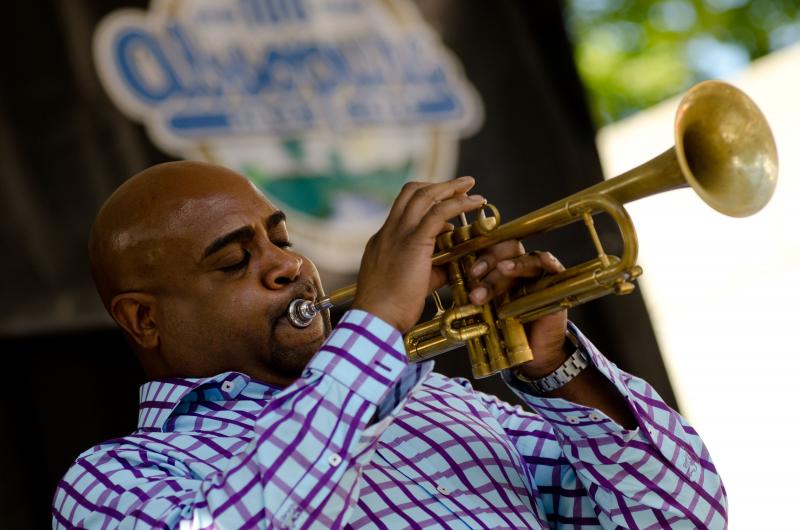 By Monday, a sense of overstimulation seemed to be settling in, but this was quickly dispelled as pianist Aaron Diehl took the stage at the Pyramid with his group featuring Warren Wolf on vibes and Rodney Green on drums. Performing much of the material from his debut release, The Bespoke Man's Narrative, Diehl locked in with his section mates for a riveting recital that was one of the best the festival had to offer. Especially fine was the pianist's clever arrangement of "Moonlight in Vermont," with Wolf unleashing a masterful solo filled with daring runs, quarter note triplets, and high wire risks that paid off with big dividends. 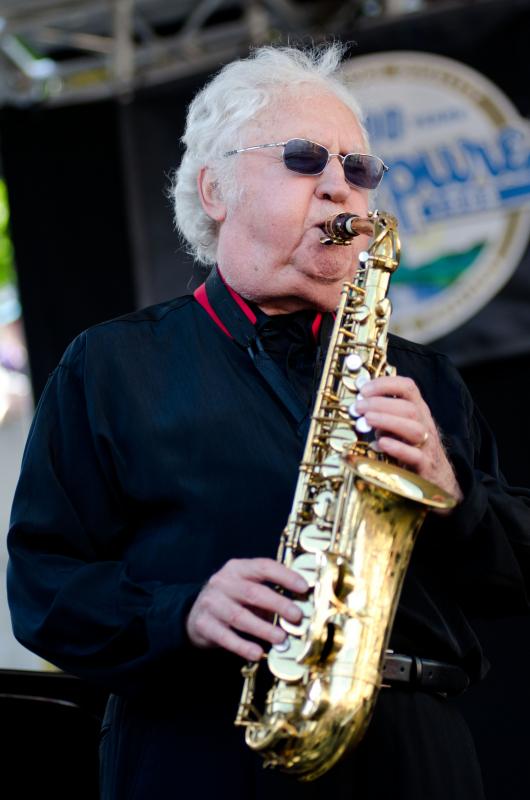 Equally enthralling was the next set by trumpeter Terell Stafford in a quintet with saxophonist Tim Warfield, bassist Rodney Whitaker, pianist Bruce Barth, and drummer Dana Hall. Paying homage to Billy Strayhorn, the ensemble's musical concoction was equal parts exploration and burning abandon. Look, these guys are the best in the business and whether it was Stafford blowing a pretty ballad on "Daydream," Warfield unleashing his own sheets of sound, or Barth rollicking along barrelhouse style, the end results were priceless.

Proving to be a hard act to follow, a less incendiary approach would be in the offing as 85-year-old legend Lee Konitz was next in line on the Pyramid schedule. No less engaging though, Konitz brought his cool voice to such standards as "Solar" and "I Can't Get Started." Right in step with their leader, the backing trio would include pianist Dan Tepfer, Ray Drummond, and the always stimulating Matt Wilson. A few more trinkets lay in store for those holding out until the end of the evening, but with a full plate, this reviewer retreated to home turf in order to prepare for a Tuesday start to the work week.