Fareed Haque is a modern guitar virtuoso. Steeped in classical and jazz traditions, his unique command of the guitar and different musical styles inspire his musical ventures with tradition and fearless innovation. Since 2011, Haque has returned to his first loves, jazz guitar and classical guitar. He has been busy performing and recording with his trio featuring legendary B3 virtuoso Tony Monaco, his own trio and jazz quartet, as well as his larger world music group the Flat Earth Ensemble. Recent releases include the critically acclaimed Out of Nowhere featuring drummer Billy Hart and bassist George Mraz, The Flat Earth Ensemble's latest release Trance Hypothesis, and The Tony Monaco/Fareed Haque release Furry Slippers that reached the top 10 in Jazz Radio Airplay. IN addition, Fareed has performed at the Chicago, Detroit, and Java Jazz festivals and was featured as part of the Made in Chicago Series performing with his numerous groups at Millenium Park's Pritzker Pavillion in Chicago 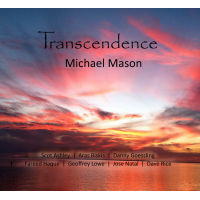 Wertico / Haque / Gray at the Bop Stop in Cleveland

Blowing in from the Windy City, drummer extraordinaire Paul Wertico recently visited the Bop Stop in Cleveland for a performance on April 15, 2022. He brought with him the exemplary talents of guitarist Fareed Haque and bassist Larry Gray. Prior to the concert, Wertico led a masterclass for all musicians discussing ways to approach the art ...

AVG Records is proud to announce the new release from critically acclaimed Jazz Flutist, Michael Mason, Transcendence Transcendence is a nine song compilation of jazz/world fusion/rock original composed/arranged/orchestrated and performed by Mason, with his long time band of gifted musicians. From upbeat guitar riffs on “Joy” to the worldly “Night Skies” with the usage of multiple ...

Label: Southport Records
Released: 2021
Track listing: Open Your Eyes; Do Butterflies Cry?; The Blank Page; The Confessional; My Original Plan; Jon's Place; About a Song; Rest; The Photograph; Almost 65; A Simple Time; They Sentenced Us to Paradise; This Winter; Lucky to Belong to You.

Direct from her critically acclaimed appearance at New York's Pangea, singer-songwriter, Joanie Pallatto, returns to her home town to continue the My Original Plan celebration. The show will Debut at the newly opened Venus Cabaret Theater on December 5th. 6:30 p.m. Joining the celebrated Artist, is her co-producer/arranger and modern guitar virtuoso Fareed Haque, pianist-composer Sparrow; ...