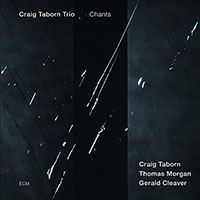 While he's been making himself a ubiquitous presence on the jazz scene for the past two decades—playing with everyone from saxophonists Tim Berne, David Binney and Chris Potter (on the equally stellar The Sublime And (Thirsty Ear, 2003), Graylen Epicenter (Mythology, 2011) and The Sirens (ECM, 2013), respectively), to bassists Michael Formanek and Scott Colley (whose Small Places (ECM, 2012) and Architect of the Silent Moment (Cam Jazz, 2007), respectively, were equally revelational)—pianist Craig Taborn's own discography as a leader has been surprisingly light. That said, Avenging Angel (ECM, 2011)—the pianist's first album under his own name since 2004's electro-centric Junk Magic (Thirsty Ear)—was a rare recording that redefined the approach to solo piano, easily placing it alongside the many other seminal solo recordings that, ranging from Paul Bley and Keith Jarrett and to Jon Balke and Francois Couturier, have come to represent one of ECM's many cornerstones.

The piano trio is another cornerstone for the heralded German label and, with Chants, Taborn not only delivers another recording that easily stands alongside trio recordings like Jarrett's Setting Standards: New York Sessions (2008) box, Stefano Battaglia's Songways (2013) and Bobo Stenson's Indicum (2012); he's once again repurposed the format to suit his own needs. An album of all-original compositions that expands upon Avenging Angel's foundational premises by relying on motivic specificity as its basis, this time, for group exploration, from the opening "Saints," Taborn's complex contrapuntal writing encourages and inspires the kind of egalitarian interaction to which many aspire but few actually achieve.

Much of the reason for this success, beyond the pianist's own irrefutable acumen, is Taborn's chosen trio mates. Bassist Thomas Morgan and drummer Gerald Cleaver have, like Taborn, become increasingly visible on the label in recent years, both apart and as a team. In addition to work with bassist Miroslav Vitous on Remembering Weather Report (2009) and Universal Syncopations II (2007), Cleaver has intersected with Taborn in both Michael Formanek's quartet and reed multi-instrumentalist Roscoe Mitchell's Note Factory, demonstrating a similarly encyclopedic reach. Meanwhile, Morgan's intuition and thoroughly selfless approach to shaping music was key to the success of pianist Masabumi Kikuchi's Sunrise (2012) and guitarist John Abercrombie's Wait Till You See Her (2009), but it's his joint work with Cleaver that has contributed to Wislawa (2013) being one of Polish trumpeter's Tomasz Stanko's best recordings since returning to the label in the mid-'90s.

A dark-hued album of sheltered beauty—even when the tempo picks up and things become more heated on tracks like "Beat the Ground"—the trio's effortless ability to navigate Taborn's often angular, sometimes densely constructed and periodically knotty compositions is all the more surprising for the amount of space that remains a key component of Chants. Even at its most seemingly impermeable, there's an unmistakable feeling of open air, whether it's Cleaver's delicate cymbal work or Morgan's sparsely chosen alternatives to Taborn's equally considered phrasing. Even as Taborn slowly builds an arpeggio-driven solo that intensifies without overstatement on "All True Night / Future Perfect," Cleaver's responsive drum rolls and cymbal crashes, and Morgan's robust alternatives—which gradually assume a more forward position in the mix—always feel empathically connected to the pianist, whose ability to explore and extrapolate upon his motivic ideas is never less than perfectly matched by his trio mates.

As ECM continues to draw attention to an American scene populated with imaginative, forward-thinking artists like Taborn, Morgan and Cleaver, alongside young-to-middle-aged peers like Tim Berne, Michael Formanek, Chris Potter, pianists David Virelles and Jason Moran, and trumpeter Ralph Alessi (who has a recording of his own forthcoming later this year), recordings like Chants make a strong case against those who suggest there's little of interest going on in the lower 48 states. In fact, based on recordings like this, Berne's Snakeoil (2012), Formanek's Small Places and the ongoing discographies of longstanding label mates like saxophonist Charles Lloyd, John Abercrombie and bassist Mark Johnson—not to mention transatlantic projects like Stańko's New York Quartet and archival finds like bassist Charlie Haden's trio with Norwegian saxophonist Jan Garbarek and Brazilian guitarist/pianist Egberto Gismonti, Magico—Carta de Amor (2012)—it's clear that, amidst the vast number of recordings being made each and every month, there's plenty of gold to be found—much of it here, on this label.

ECM's current preponderance of American artists like Taborn and albums like Chants only suggest that label head/producer Manfred Eicher remains ever on the lookout for innovation and genre-bending, wherever it may be found. And though he's been a musician's musician for a long time, with the label's one-two punch of Avenging Angel, and now Chants, Taborn is finally getting the recognition and international push he so richly deserves. Beyond those who've known, for a long time, that there's very little—if anything—beyond his reach, Chants is an album that augments the label's already vast collection of piano trio recordings with an unmistakably personal album whose hidden beauty unveils itself further with each and every listen.