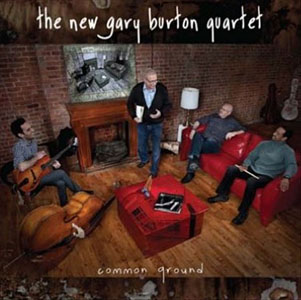 In a career now entering its sixth decade, vibraphonist Gary Burton has participated in plenty of one-off recordings, paying tribute to everyone from tango master Astor Piazzolla to mallet-men who have come before, like Lionel Hampton and Milt Jackson. His discography has been nothing if not unfailingly consistent—every recording meticulously conceived and flawlessly executed. A project, perhaps, rather than an ongoing concern, but Burton's last record, Live (Concord, 2009), remains as exhilarating a concert recording as the vibraphonist has done, bringing guitarist Pat Metheny and bassist Steve Swallow back from his mid-'70s groups, with newcomer/drummer Antonio Sanchez along for the ride. Still, Burton has done some of his best work with his working bands, and Common Ground announces the arrival of a new quartet that may be his best guitar-driven group since Metheny first came to attention with the vibraphonist at the age of 20 on Ring (ECM, 1974).

Burton has always had remarkable instincts for scouting out guitar talent, but he's never introduced a prodigy like Julian Lage, who trumped Metheny by more than two years when he appeared on Burton's Generations (Concord, 2004) at the age of 17. Continuing to work with Burton on Next Generation (Concord, 2005), his growth has been palpable across gigs with drummer Eric Harland and pianist Taylor Eigsti, not to mention his debut as a leader, Sounding Point (EmArcy, 2009), where he married Jim Hall's warm-toned economy with youthful exuberance, while avoiding the trappings of excess that usually go along with it. That's not to say he can't burn up the frets; his solo on Sanchez's fast-swinging blues, "Did You Get It?," combines lithe dexterity with aggressive picking that becomes, at times, staccato-like in its rapid-fire punctuation, all the while mirroring Burton's inherent precision and perfection. Lage's solo on bassist Scott Colley's more relaxed "Never the Same Way" explores motivic development and frightening inevitability, even as the support from Burton, Colley and Sanchez renders ambiguous who is pushing and who is pulling.

A quality that only further supports the egalitarian feel of Common Ground. Burton has never been a prolific writer—his sole contribution, a more delicate yet expansive treatment of the dark-hued "Was It So Long Ago?," from Times Like These (GRP, 1988)—but Common Ground focuses, even more than his last "working band" discs, on contributions from his mates, along with two tracks from Next Generation pianist Vadim Neselovskyi. Still, a liberal treatment of "My Funny Valentine"—its first half occupied by an a capella guitar solo that draws a clear line between Joe Pass-era traditionalism and more sophisticated modernity—and a new look at pianist Keith Jarrett's gospel-tinged "In Your Quiet Place," with a similarly definitive opening from Burton—makes clear that however strong the material is, it's the quartet's intrinsic chemistry that makes it great.

Lage's knotty, arpeggio-driven "Etude" demonstrates the effortless virtuosity assembled by Burton, opening up to solos from the guitarist and vibraphonist that are amongst their best in recent memory. Colley and Sanchez solo less, but their fluid conversational support consistently elevates Common Ground, an album that may reflect its participants' shared interests, but is anything but common.

The Late Night Sunrise; Never the Same Way; Common Ground; Was It Long Ago?; Etude; Last Snow; Did You Get It? My Funny Valentine; Banksy; In Your Quiet Place.