The Los Angeles Times has praised Neselovskyi’s “extraordinary playing” while The Guardian (UK) has called him “the most promising of the young improvisers.” All About Jazz recognized his singular versatility, referring to him as “a strong pianist [as well as] a composer who blends form and freedom in new ways.”

Those diverse talents have attracted the attention of revered artists crossing the boundaries of genre, including legendary vibraphonist Gary Burton, who famously enlisted Neselovskyi for his acclaimed Generations Quintet; the prestigious Graz Philharmoniker, which performed his composition “Prelude for Vibes” on their New Year’s program; iconoclastic composer/saxophonist John Zorn, who invited Neselovskyi to contribute to The Book Beriah, the final installment of his quarter-century Masada project; and French horn/alphorn pioneer Arkady Shilkloper, a profound influence with whom the pianist now shares a longstanding duo collaboration.

Neselovskyi’s most recent release, Get Up and Go (Jazz Family/Neuklang), earned a rare 4.5-star review from DownBeat, placing it amongst the year’s best releases. The album showcases the meaningful bond forged between the pianist and his gifted bandmates, bassist Dan Loomis and drummer Ronen Itzik, during a visit to Neselovskyi’s native Ukraine at a time of intense political upheaval. The trio’s chemistry has only deepened since that time, through tours of the U.S., Europe, Asia and Mexico, well-received appearances at the Village Vanguard and the Blue Note in New York City, and live broadcasts on France’s Arte TV and Germany’s WDR. They’ll return to Germany in 2019 for a live concert on the SWR network.

The pianist’s next project will be a recording of his composition Bez Mezh (which, fittingly, means “no limits” in Ukrainian) by the International Symphony Orchestra (INSO) from Lviv, Ukraine. The ambitious work vividly interlaces composition and improvisation, providing both the piano soloist and the 65-piece orchestra with thrilling challenges to navigate.

A child prodigy in still-Soviet Ukraine, Neselovskyi became the youngest student to be accepted into the famed Odessa Conservatory. At the same time that he was honing his classical virtuosity, he was hearing such jazz giants as Keith Jarrett, Chick Corea and Thelonious Monk via CDs sold by sailors passing through the bustling port city (or, more often, tapes dubbed from those CDs). At 17, he moved with his family to Dortmund, Germany, continuing his classical studies while establishing himself on the local jazz scene.

Having delved into classical music in the country that gave birth to Bach and Beethoven, Neselovskyi determined to pursue his passion for jazz in the country of its birth. He moved to the United States to study at Berklee College of Music, where he was asked to perform on and compose for a promotional recording produced by Pat Metheny that also featured Esperanza Spalding and Christian Scott. He was then selected by Herbie Hancock, Wayne Shorter and Terence Blanchard to attend the Thelonious Monk Institute, where he was awarded a full scholarship. Through the Monk Institute’s auspices he enjoyed the opportunity to share the stage with Hancock, Blanchard, Chaka Khan, John Scofield, Kurt Rosenwinkel, Benny Golson, Dee Dee Bridgewater and a number of other greats while touring internationally.

Neselovskyi received his most crucial break via a former Berklee mentor and longtime influence, Gary Burton. Long known for his knack for discovering and nurturing young talent, Burton asked the pianist to join his Generations Quintet, where Neselovskyi’s bandmates included fellow future all-stars Julian Lage, Luques Curtis, and James Williams. Even after that group disbanded, Neselovskyi continued composing and arranging for Burton until the vibraphonist’s retirement in 2017, contributing to three albums: Next Generation (Concord), If You Love Me (Cam Jazz), and Common Ground (Mack Avenue).

In 2007, Neselovskyi made his leader debut with the quintet outing Spring Song, which included his composition “Prelude for Vibes,” originally penned with Burton in mind and later expanded into an orchestral version for the Graz Philharmoniker, one of many instances of compositions which have proved rich and layered enough to adapt to a staggering variety of contexts. The gorgeous solo piano collection Music for September followed in 2013, produced by no less a keyboard authority than Fred Hersch. The album featured a mix of jazz standards, classical repertoire and original compositions, spotlighting Neselovskyi’s virtuosity and versatility while seamlessly merging genres in a deeply personal way, free of theoretical fusion trappings.

Around the same time Neselovskyi was invited to play his first duo concert with the renowned French horn and alphorn master Arkady Shilkloper, best known for his ground-breaking ECM recordings with pianist Mikhail Alperin. Having long admired Shilkloper for his ability to meld a wealth of influences into a distinctive voice, Neselovskyi was excited to discover they shared a vibrant musical chemistry, since evidenced by three duo releases: Last Snow (2013), Krai (2015), and Lustrum (2017). In December 2018 the two will perform Neselovskyi’s “Seasons for Symphony Orchestra, Horn and Piano” suite with the Omsk Philharmonic Orchestra in Russia.

A more recent connection has been the one Neselovskyi has made with John Zorn, who asked the pianist to contribute to his 11-CD set The Book Beriah (Tzadik), compiling the 92 compositions making up the final book of his 25-year Masada project. The disc features Neselovskyi playing solo, in duo with pianist Craig Taborn, and with his trio. He also contributed an essay to the 20th Anniversary Edition of Zorn’s acclaimed Arcana series collecting the writings of musicians discussing their craft, and in 2020 will be featured in his first weeklong engagement at Zorn’s innovative performance space, The Stone at the New School.

Whether as a pianist, a composer, an improviser, a soloist or a bandleader, Vadim Neselovskyi creates music that is truly inspired and wholly unique. That explains why his work has been played by jazz greats like Randy Brecker, Antonio Sanchez, Julian Lage, and Gary Burton, as well as classical artists (Daniel Gauthier, whose recording of Neselovskyi’s “San Felio” won an ECHO Classical Award) and symphony orchestras in the United States (Spokane Symphony, Lancaster Symphony) and Europe (New Philharmonic Westfalen, INSO Lviv Symphony). Show less 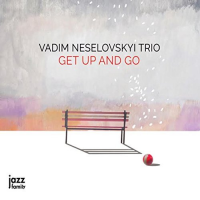 Get Up And Go 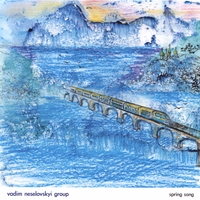 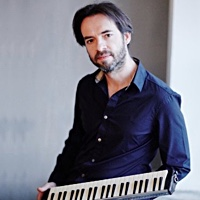 All About Jazz musician pages are maintained by musicians, publicists and trusted members like you. Interested? Tell us why you would like to improve the Vadim Neselovskyi musician page.