Vadim Neselovskyi: Odesa: A Musical Walk Through a Legendary City 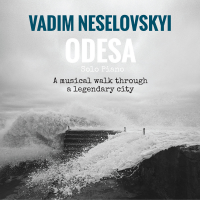 Vadim Neselovskyi, as insisting as he is playful and dramatic, is a fierce vivacious musician with a great gift for making an amalgamation of percussive fireworks with melodic motives flashing up time and again. His music is full of vital, explosive turnarounds and suddenly appearing melancholic moments. Odesa: A Musical Walk Through A Legendary City is his musical shaping of the shimmering and colorful realities of this port city at the Black Sea shore, a gateway to the south and the east with its vital incoming and outgoing movements of people, goods and cultures through a turbulent and glorious history. It is the permanent change of perspectives from which wholeness and unity arises time after time, as does oppression and decline, concealment, disclosure and discovery that all through history's course leave their traces.

The dynamics of pianist Neselovskyi cut deep in a clear and original sense, exceeding by far what we know from the jazz field, especially with regard to atmospheric contrasts. It is a question of activating the adequate means of expression from passion and surrender. His work can carry the present political charge it gets assigned. It works because his music is so fetching as it speaks to our imagination. In a great way he incorporates the song "My Zhdem Peremen" (We Wait For Changes) of rock musician Viktor Tsoj. At the end of the 80s this song became an anthem of protest and independence movements in Soviet Republics and still is in use (Belarus, Ukraine). The music is full of hints and allusions immediately meaningful for Ukrainian listeners, while foreigners can feel it—though they may have to decode some of what it expresses.

"Odesa" (Одеса = /ɔ-de-sa/) is the Ukrainian version of the city's name. More familiar to westerners is the Russian version 'Odessa' (Oдесса /adjessa/). It seems a minimal difference but reflects systematic differences between Ukrainian and Russian language, which constitute Ukrainian as a Slavonic language in its own right.

Neselovskyi's opus consists of nine thematic pieces, two intros and two interludes. "Intro" and "Odesa Railway Station" are heavily rolling in the lower register and strident in the higher register. Lines dissolve and bundle again, slow parts open and remain pending. Lyrical glades burst forth then disappear. "Winter in Odesa" visits a barren landscape of a rare lyrical quality, exuding the cold and and the stiffened, quiet space.

"Potemkin Stairs" refers to the stairs where the world famous cruel scene from Sergej Eisenstein's 1925 silent film, Battleship Potemkin, was shot—a film about the 1905 mutiny against the Tsar's rule. Neselovskyi's music has sharp tempo changes, high agitation and is full of fierce drama. His edgy touch increases here to inescapable intensity embodying the frightening reality in the present moment. The subsequent "Acacia Trees" comes as a calm contrast exuding confidence and still beauty without falling into cloying pianistic lines. Its exceptional suggestiveness has deep impact. "Waltz of Odesa Conservatory" comes forth from Neselovskyi's own youthful memories. It is a playful piece. Parallel lines dance and jump in full virtuosity.

"Odesa 1941" is a heavy combat piece, an expressive masterpiece that elicits the feeling of the devastation of the horros of war—a musical experience up close. Neselovskyi triggers this by fierce, harsh and edgy rhythmical countermovements, thereby reaching sound intensities lying between Xenakis and Ustvolskaya. In the end there is a sudden and confusing deep stillness, as if the world has come to a halt and only the breathing of the space remains. The piece refers to the siege of Odesa by Romanian, Italian and German troops and the subsequent massacres of, mainly, the Jewish population in and around Odesa between October 1941 and winter 1942.

"Intro Jewish Dance" and "Jewish Dance" do not meet the usual narrative expectation. The dance does not appear as a simple revival of old sources. Neselovskyi literally hammers out shapes of an old Jewish lullaby that slowly shines through abstract splinters. Neselovskyi generates this by independent lines of both his hands. It's a brittle thing that does not fully revive.

"Interlude" and "My First Rock Concert" allude to the highly compelling legendary song "Blood Type" of rock musician Viktor Tsoj (1962-1990) and his Soviet rock group Kino from the 80s. Neselovskyi's own piece is complex as well as heavily rocking. It is greatly rolling and tumbling and has an endless loop quality. The subsequent "Interlude" is a longer echo of this, especially of Viktor Tsoj's song "My Zhdem Peremen" (We Wait For Changes). Released at the end of the 80s, right before the collapse of the USSR, it became an anthem of protest independence movements in Soviet Republics. "Renaissance Odesa" is the concluding piece. It exudes reconciliation without falling into comfortable cliché. It has the beauty of hope.

It is a wide range of experiences that Neselovskyi expresses with great poignancy and passion in this moving opus of extraordinary class. And, live in concert, he makes this tangible with even greater intensity.