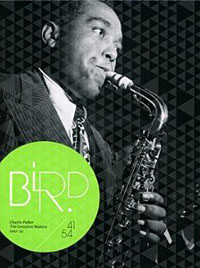 It is possible that more "complete" collections of the work of Charlie Parker have been released than there were recordings made by the saxophonist. And as you beat your way through the box set undergrowth, caution is required. Few of the collections are, in fact, complete, even within the parameters (complete live, complete studio, complete with strings, etc) by which they define themselves. In the hands of record company marketing departments, "complete" can take on a stretchability that would be the envy of Marvel Comics' Elastic Man.

Universal France's 13-disc set, The Complete Masters 1941-54 is more complete than most, with only a few omissions within its parameters. It is left to the purchaser to work out, however, what those parameters are; no definition of "complete masters" is given in the 68-page liner booklet. What it seems to mean is: the complete studio master takes made under Parker's or others' leadership and released during Parker's lifetime or shortly after his death, plus selected tracks from the far greater number of live, broadcast, "unofficial" or private recordings (the content on discs 12 and 13).

So, for instance, all 14 "masters" comprising the two original albums titled Charlie Parker With Strings (Mercury, 1950) are included, but not the ten additional "master takes" included on Verve's 1995 reissue, Charlie Parker With Strings: The Master Takes. So, too, only one track ("Wee") is included from the "unofficial" live album Jazz At Massey Hall (Debut, 1953), on which Parker was originally credited as Charlie Chan to avoid contract violation.

Because The Complete Masters 1941-54 cuts out the many alternate takes, works in progress and band or recording breakdowns which have been added to Parker's posthumous releases, it is an ideal starting point for anyone venturing into the thicket of "complete" Parker collections: it is 24 carat from start to finish. Almost all of the original-release, studio master takes Parker recorded under his own name—for Savoy, Dial, Mercury, Norgran, Verve and Clef—are included; so too are almost all of those made under the leadership, actual or titular, of trumpeters Dizzy Gillespie and Miles Davis, guitarist Tiny Grimes, pianist Clyde Hart and others, along with early outings in bands led by pianists Jay McShann, Slim Gaillard and Sir Charles Thompson and vibraphonist Red Norvo.

The live, broadcast, "unofficial" or private recordings compiled on discs 12 and 13 throw up some less celebrated gems. The berserk 1947 recording of Dixieland warhorse "Tiger Rag" made with Barry Ulanov and His All Star Metronome Jazzmen; once heard, not to be forgotten (though not necessarily to be replayed often). Two incandescent live cuts ("Move" and "The Street Beat") broadcast from the Birdland club in June 1950 with trumpeter Fats Navarro, pianist Bud Powell, bassist Curly Russell and drummer Art Blakey. The searing solo entrance Parker makes to "April In Paris," broadcast from the Café Society club in the spring or summer of 1950, which silences the chattering audience in a beat. Four great tracks ("Hot House," "Be-Bop," "Oop Bop Sh'Bam" and "Anthropology") made with a variety of line-ups including a septet with vibraphonist Milt Jackson ("Anthropology"), broadcast from the Royal Roost club between December 1948 and March 1949.

The Complete Masters 1941-54 delivers a muthalode of some of most exciting jazz recorded up to the mid-1950s or since. No "bonus" tracks, just the solid gold real deal with which Parker and his fellow travelers revolutionized jazz. And the immaculate disc mastering, by Studio 101, does the material justice.