Tiny Grimes began his musical career playing drums and piano. In 1938 he took up the guitar choosing the unusual electric 4-string tenor guitar.

After leaving Tatum, Grimes recorded with his own groups in New York and he recorded with a long list of leading musicians; Ike Quebec, Cozy Cole, Leonard Feather and Buck Clayton, among others. He was also selected to record with the famous Metronome All Star Band and appears on the recording “Look Out,” on which he shared the guitar duties with Billy Bauer.

During this time he made four recordings with Charlie Parker that are considered excellent examples of early bebop jazz; “Tiny’s Tempo,” “Red Cross,” “Romance Without Finance,” and “I’ll Always Love You.”

Tiny Grimes continued to lead his own groups into the later 1970’s and he recorded with Coleman Hawkins, Illinois Jacquet and Roy Eldridge.

Some of the key recordings from the later years of his career are: “Callin’ The Blues,” “Blues Groove” and “Some Groovy Fours” made in France on the Black and Blue Label. 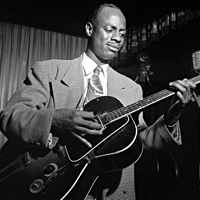 All About Jazz musician pages are maintained by musicians, publicists and trusted members like you. Interested? Tell us why you would like to improve the Tiny Grimes musician page.