From the days in the mid-1930s when he was a teenaged singer and saxophonist in the Houston band of Chester Boone, Cleanhead had his own way with the blues. He was good enough as a young man to tour with blues artists Big Bill Broonzy and Lil Green and then to join trumpeter Cootie Williams’s band.

In the Forties he infused his alto with bebop and led his own big band and a sextet that included John Coltrane, who was influenced by Vinson’s expansive style. His “Cherry Red” with Williams made him popular for a while, but it wasn’t until Cannonball Adderley created new exposure for Vinson in the early Sixties that he began to be noticed again by large numbers of people. Through the Seventies and Eighties he made several albums that were critical and commercial successes.

Vinson was born on 8 December 1917, Houston, Texas. Taking up the alto saxophone as a child, his proficiency at the instrument attracted local bandleaders even while young Vinson was still at school, and he began touring with Chester Boone's territory band during school holidays. Upon his graduation in 1935, Vinson joined the band full-time, remaining when the outfit was taken over by Milton Larkins the following year. During his five-year tenure with the legendary Larkins band he met T-Bone Walker, Arnett Cobb, and Illinois Jacquet, who all played with Larkins in the late 30s. More importantly the band's touring schedule brought Vinson into contact with Big Bill Broonzy, who taught him how to shout the blues, and Jay "Hootie" McShann's Orchestra whose innovative young alto player, Charlie Parker, was "kidnapped" by Vinson for several days in 1941 in order to study his technique.

After being discovered by Cootie Williams in late 1941, Vinson joined the trumpeter's new orchestra in New York City and made his recording debut for OKeh Records in April 1942, singing a solid blues vocal on "When My Baby Left Me,” with the Williams orchestra. Vinson also recorded for Hit Records (1944), Capitol Records, (’45)before leaving to form his own big band in late 1945 and recording for Mercury Records. At Mercury he recorded small-group bop and blasting band instrumentals, but his main output was the fine body of suggestive jump-blues sung in his unique wheezy Texas style. Hits such as "Juice Head Baby," "Kidney Stew Blues," and "Old Maid Boogie," were the exceptions, however, as most of Vinson's no-holds-barred songs, including "Some Women Do," "Oil Man Blues," and "Ever- Ready Blues", were simply too raunchy for airplay.

After the 1948 union ban, Vinson began recording for King Records in a largely unchanged style "I'm Gonna Wind Your Clock," "I'm Weak But Willing," "Somebody Done Stole My Cherry Red,” often with all-star jazz units. However, his records were not promoted as well as King's biggest R&B stars, such as Wynonie Harris and Roy Brown, and he left to return to Mercury in the early 50s, rejoining Cootie Williams' small band briefly in the mid-50s.

In 1957 he toured with Count Basie's Orchestra and made some recordings with a small Basie unit for King's jazz subsidiary, Bethlehem Records, after which he retired to Houston.

In 1961 he was rediscovered by fellow-alto saxophonist Cannonball Adderley, and a fine album “Cleanhead and Cannonball,” resulted on Riverside Records with the Adderley brothers" small band consisting also of Joe Zawinul, Louis Hayes, and Sam Jones.

He remained active all throughout the ‘60’s and was able to capitalize on the Blues Revival of the decade, gaining a new and younger audience at home and overseas. He did revue style tours with the likes of Count Basie and Johnny Otis, and toured Europe with Jay McShann. A 1969 session for the French Black and Blue label “Wee Baby Blues,” with pianist McShann and tenor saxophonist Hal Singer, was another well timed recording. 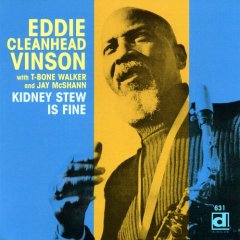 All About Jazz musician pages are maintained by musicians, publicists and trusted members like you. Interested? Tell us why you would like to improve the Eddie "Cleanhead" Vinson musician page.