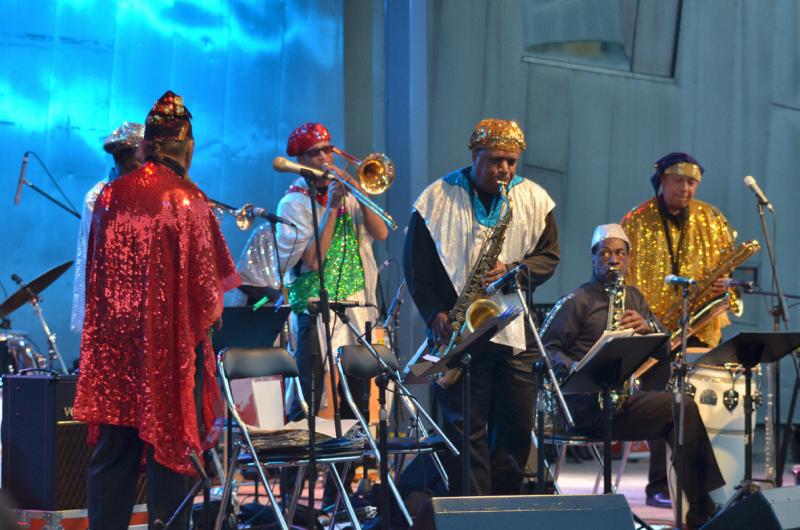 This concert concluded a tripartite series curated by saxophonist, band leader, and composer/arranger Bobby Zankel entitled "Still the New Thing" honoring three icons of avant- garde jazz: Cecil Taylor, Ornette Coleman, and Sun Ra on the occasions of their birth dates and anniversaries of key events in their careers.

Sun Ra's belief that he was from another planet, his frequent changes of personality and personnel, and his use of "intergalactic" costumes and musical themes, obscure his major contributions to modern jazz. As his Wikipedia entry states: "Sun Ra was a prolific recording artist and frequent live performer. His music ranged from keyboard solos to big bands of over 30 musicians and touched on virtually the entire history of jazz, from ragtime to swing music, from bebop to free jazz. He was also a pioneer of electronic music and space music. He also used free improvisation and was one of the early musicians to make extensive use of electronic keyboards." Partly through the intercession of Pharoah Sanders, Sun Ra influenced John Coltrane's ground-breaking excursions into avant- garde jazz. Since his death in 1993, Sun Ra's associate, the saxophonist Marshall Allen, has kept the Sun Ra Arkestra alive and well, with recordings and numerous international appearances. The group continues to be based in Philadelphia, where Sun Ra resided after 1968.

To honor Sun Ra, his legacy. and his 100th birthday (he was born Herman Poole Blount on May 22, 1914 in Birmingham, Alabama), the "Centennial" Arkestra under Marshall Allen's direction was preceded by Bobby Zankel's Warriors of the Wonderful Sound, a big band ensemble consisting of virtuoso musicians playing primarily Zankel's outstanding compositions and arrangements. Since their founding in 2001, the Warriors have performed and stimulated the music scene in and around Philadelphia, issued several recordings, notably the highly praised Ceremonies of Forgiveness (Dreambox Media, 2006), and paired on various occasions with innovative musicians such as Uri Caine, Dave Liebman, Odean Pope, Rudresh Mahanthappa, and Steve Coleman. The Warriors' way of operating is so different from the Sun Ra Arkestra's that at first one wondered whether they would fit in to this occasion. But there are strong reasons for this placement. Zankel and many of his associates were strongly influenced by Sun Ra, and the idea for the Warriors was inspired largely by the Arkestra. Both groups are members of a small and elite club of big bands that are truly immersed in the "new thing:" avant-garde musical culture.

The most obvious thing about this concert was the stark contrast between both the visual image and musical projection of the two groups. The Warriors looked like local businessmen on a shirtsleeve and sport jacket work break, while the Arkestra members were decked out in colorful interplanetary costumes. The Warriors performed with the seriousness of a disciplined classical ensemble, while the Arkestra used their stock-in-trade fun, parody, and occasional forays up the aisles to create a carnivalesque atmosphere. The Warriors performed Zankel's well-crafted contemporary compositions and arrangements, while the Arkestra carved out a musical excursion through jazz history with compositions and styles ranging from boogie woogie to post-WWII swing, all infused with liberal elements of free jazz.

The Warriors proceeded with four extended compositions, each of which provided ample opportunities for both ensemble work and solos: "Spirits Break to Freedom," "Trickster," "Acknowledgment" (from Coltrane's "A Love Supreme," arranged by Zankel); and "Next Time I See You." "Spirits Break to Freedom" was from Zankel's theatrical and dance performance by the same name, in which he collaborated with dancer/choreographer Germaine Ingram and a long-time friend of his, visual artist John Dowell, who recently had an exhibition at the Philadelphia Museum of Art. "Next Time I See You" (Bobby Zankel Quintet: Prayer and Action, CIMP, 1997) is Zankel's tribute to Wayne Shorter's wife, Ana Maria, who died on the ill- fated TWA Flight 800 in 1996. "Acknowledgment" is Zankel's brilliant arrangement of the first movement of Coltrane's "A Love Supreme," using a broad palette of harmonic and rhythmic brushtrokes to express deep feelings of humility, ecstasy, and gratitude. All the pieces were characterized by Zankel's tight, clustered, rhythmic, and recurrent tonal arrangements that build in intensity and are structured to allow for maximum expression and elaboration by the soloists, even when the ensemble is playing full tilt behind them.

Without exception, the Warrior musicians showed the highest level of competence both in ensemble work and solo improvising. Every one of them took marvelous solos. Elliot Levin, a reed player with a highly disciplined straight-ahead approach, rendered flute solos with remarkable technical facility and rich imagination. Trumpeters Stan Slotter and Josh Lawrence improvised with respective straight-ahead and gritty styles that provided a nice contrast to one another. Steve Swell, one of the most resilient trombonists of any generation, did superb solo work, especially in "Spirits Break," while John Swana's valve trombone renditions had the precision and brilliance of conception that characterized his trend-setting trumpet playing as a Criss-Cross artist. (Swana had developed embouchure problems on trumpet, and switched for several years to EWI: electronic wind instrument. Recently taking up valve trombone, he has swiftly moved to the front line of that instrument.) Bassist Lee Smith was given ample room for an astonishingly virtuosic solo. Pianist Tom Lawton attained a fusion of hard bop and contemporary maneuvers that enriched the musical lexicon of the band. Diane Monroe's electric violin added a special sonority. Mark Allen plunged with agility to the deeper registers of the baritone saxophone, while Julian Pressley and Bobby Zankel sang with controlled ecstasy up to the high end of their alto saxophones. Craig McIver and Francois Zayas waited until late in the set to emerge with powerful rhythmic intensity. It is impossible to praise these musicians too much. They represent the highest level of capability that jazz has to offer. The overall effect was electric from start to finish.

The Warriors are a hard act to follow, but the Sun Ra Centennial Arkestra succeeded by offering a combination of art, entertainment, and sheer acrobatics that was as close to the Cirque de Soleil as its possible to get without flying through the air. What they offered for this reviewer was temporary release from the entrapments of bureaucratic existence. From the standpoint of jazz as such, the Arkestra manifests the African tribal rituals and masks in which the music is rooted, as well as the journey to other worlds inherent in Brazilian carnivale and the trance-like states of Carribean healing rites, all transformed into "Interplanetary Music" in which "Space is the Place," as the opening and encore numbers were entitled. One of the creative features of avant-garde movement is the conjoining of music, art, dance, costume, poetry, and indeed whatever might be at hand, to create a total audio-visual emotional experience. The Arkestra perpetually has been one of the seminal manifestations of such integration of forms, all with a psychedelic sense of the fantastic becoming real. Without Sun Ra and the Arkestra, a lot of what has happened in modern jazz might never have occurred.

There were several notable solar flares generated by the Arkestra performers. Vocalist Tara Middleton achieved a unique blend of jazz and soul, especially in "Interplanetary Music." After her strong beginning, one wished she had continued on with full vocal numbers, but she seemed to take a back seat during the remainder of the set. However, when she did interject some singing into the subsequent pieces, she added a distinct flavor. Leader Marshall Allen took numerous solos throughout. His tenor saxophone exhumation of "Cocktails for Two" satirized the bourgeois pseudo-sophistication embodied in the lyrics. (He managed, through his use of rubato and glissando, to evoke the accentuations of a phony English accent.) Keyboardist Farid Barron stunningly resurrected boogie- woogie and stride piano and got the rest of the rhythm section going along with him in a masterful way. Charles Davis on tenor saxophone competently evoked Coleman Hawkins. As always, the Arkestra personnel showed exceptional musical ability, but the showmanship aspect of their work kept them from fully demonstrating their capabilities on their instruments. Guitarist Dave Hotep, however, managed to get in a couple of swinging solos.

All in all, this concert offered a rich taste of the serious and light-hearted sides of the Sun Ra legacy and made clear his massive contribution to the musical vocabulary. Taken as a whole, the series of three events honoring Taylor, Coleman, and Sun Ra was a remarkable living demonstration of the richness of the jazz idiom when it breaks the bounds of convention and ventures into the stratosphere of new ideas and expressive possibilities. The audiences also contributed to the sense of magic and wonder. They listened attentively, immersed themselves in the experience, and showed great respect for the bands. Jazz at its best generates a powerful connection between the players, the music, and the audience, and throughout this series, many forces came together to create a truly expansive musical experience for all concerned.

Warriors of the Wonderful Sound: (All songs composed by Bobby Zankel except where noted): Spirits Break to Freedom; Trickster; Acknowledgment (from John Coltrane's "A Love Supreme," arr. Bobby Zankel); Next Time I See You.