Melphi: Through The Looking Glass 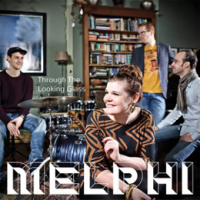 Melphi is a Dutch quartet, named for the character of Dr Jennifer Melfi, the psychiatrist in The Sopranos. Through The Looking Glass is the band's first album (available only as a download). Alice went through the looking glass: into a fantastic world where nothing was as it seemed and strange, menacing characters appeared as if from nowhere. A mobster's shrink, a young Victorian girl's journey into a dreamlike fantasy. Put them together and what's the result? Nothing strange, nothing menacing—just a striking, mesmerising, recording full of soulful, jazz-inspired songs.

Pianist Rogier Telderman formed Melphi in 2010 and is the band's main composer. He's joined by bassist Jurriaan Dekker and drummer Willem van der Krabben. The three men display talent and maturity as players—each one capable of excellent solos, but also with the confidence to play in the service of the songs, rather than simply to display their undoubted chops.

Lotte van Drunen is Melphi's singer and chief lyricist. Her voice is superbly suited to these songs —fragile one minute, raunchy and sassy the next. There are moments on "Not This Time" when she seems to channel the relaxed sensuality of Eartha Kitt, then a few bars later she's heading into Janis Joplin territory. She sings with a soulful honesty, investing each lyric with emotion and believability.

Van Drunen's talent as a lyricist is also impressive, well-crafted lines abound. "Doors have their way of slamming themselves in your face," she sings on "Love"—a universal truth for the romantic, eloquently put on this delicate and lovely tune.

"Never Give All The Heart"—Telderman's music, lyrics from a poem by William Butler Yeats—is performed with great tenderness. By contrast, Melphi gets funky on "Last Night," powered forward by van der Krabben's drums, and downbeat on the mini-dramas of "Fall" and "Nowadays Disaster." There are few places where the quality drops a touch—the chorus of "Can't Get Home" is somewhat repetitive, the vocal a bit too strident, but even here the sultry groove from Dekker and van der Krabben holds the attention.

A key moment comes three and a half minutes into "Slow Motion," when van Drunen's defiant yet heartbreaking vocal gives way to Dekker's brief but gorgeous bass guitar solo. The shift is unexpected but perfectly-judged—Dekker captures the emotion in van Drunen's voice and takes flight with equal passion and soul. It's an album high spot, but not the only one.

When Alice went through her own particular looking glass, the White Queen insisted that she could have jam tomorrow or jam yesterday, but not today. Melphi's Through The Looking Glass offers jam today and every other day we choose to listen—a treat for the heart and soul.