BY JACK BOWERS
September 30, 2013
Sign in to view read count 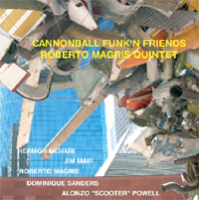 Pianist Roberto Magris, who logs so much time in studios that he should be awarded Frequent Recording points, is back with two more albums, the first by a quintet with alto Jim Mair sitting in for Cannonball Adderley and trumpeter Hermon Mehari for Cannonball's brother, Nat, the second a trio session billed as Vol. 2 in a tribute to the late pianist Elmo Hope but containing no music written by its dedicatee (well, the album's title does read "and More").

In choosing music for the quintet, Magris says he focused on "the groovy side" of Cannonball Adderley's songbook. That entails new arrangements of Duke Pearson's "Jeannine," Frank Rosolino's "Blue Daniel," Oscar Pettiford's "Bohemia After Dark," Eddie "Cleanhead" Vinson's "Arriving Soon" and other themes including two by Magris ("Keep Headed in the Right Direction," "Outback Special"), Walter Booker's "Saudade" and Adderley's "Sticks." Magris plays piano most of the way, Hammond B3 organ on "Blue Daniel" and "Outback Special." Rounding out the quintet are bassist Dominique Sanders and drummer Alonzo "Scooter" Powell whose funky R&B licks served as an inspiration for the album.

The mood is cheeky and aggressive from start to finish, and everyone plays well within that framework. What the album does not have, of course, is either of the Adderley brothers, and so it is missing the deep-rooted ebullience they would bring to any such enterprise. Aside from that, an astute and listenable session.

Magris' trio (Elisa Pruett, bass; Albert "Tootie" Heath or Brian Steever, drums) walks a more straight-ahead path on One Night in With Hope, which includes a bonus track ("Possessed Me"), recorded in 2008 with Pruett, tenor saxophonist Paul Carr and drummer Idris Muhammad. Magris, on piano all the way, seems more at ease here, playing with enthusiasm and awareness, as do Pruett, Heath (five numbers) and Steever (four). Even the "curious tune in," Neal Hefti's theme from "The Odd Couple," is given a likeable reading. The bonus track is another bright spot, as Carr adds a persuasive voice to the group (even though Magris' piano is a tad over-recorded).

In sum, two more well-designed albums from the indefatigable Mr. Magris who you may rest assured you'll be hearing from again soon.