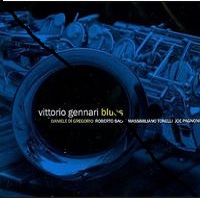 Italian alto saxophonist Vittorio Gennari manages to keep together his band from his 2010 Melodies for another run on Blues, a recording he nominally shares with vibraphonist Daniele Di Gregorio. The two survey the sacred twelve bars much in the same way as Jackie McLean on his 1961 Bluesnik (Blue Note) or Jimmy Smith on Six Views of the Blues (1958, Blue Note). In these cases, the principles were putting their personal mark on the blues, uniquely and definitely. Gennari is no household name to be sure, but in his 70s, he is a convincing example of the exegesis jazz produced in Europe in the last century. He provides a fresh interpretation to these durable originals and standards.

Gennari accomplishes this freshness by re-suspending these eleven pieces in slightly different signatures, stressing the unstressed and unstressing the stressed. Oscar Pettiford's "Blues in the Closet" begins like a fragmented counterpoint before straightening out into anything sounding familiar, at which point it swings for the fences. Gennari has a liquid tone, not as dry as Paul Desmond nor as slippery as Johnny Hodges. He sharpens this tone on a beautifully cleaned-up, stuttering take of Sonny Rollins' "Blue Seven." vibraphonist Di Gregorio juxtaposes two styles with these songs: a more percussive, marimba-like tone on the former and all Milt Jackson on the latter.

This recital is no mere regurgitation of old songs played with musty reverence. This is established jazz reinvented without evoking the nuclear "free jazz" or "avant-garde" options. Gennari skillfully uses the vibraphone as a centerpiece to these compositions along with his tart alto saxophone to achieve a sharply balanced master tone. This is what mainstream, or what has now become "traditional jazz" has come to: reconsideration, re-invention, perfection.

Blues in the Closet; Blue Seven; Ammore; Stolen Moments; Another Blues; Mr. P.C.; Turn Around; Blues for Philly Joe; Birk’s Works; Things Ain’t What The Used to Be; Audrey.