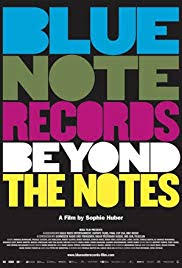 Blue Note fans will love this film. It is an unblemished, 360-degree, feel-good feast for the eyes and the ears. Intended by director Sophie Huber to make sense to newcomers to jazz, Blue Note Records Beyond The Notes does not offer any arcane new perspectives on the label. It is instead a loving trawl through Blue Note's history and an affirmation of its continuing relevance.

The film dives deep into the label's audio-visual archive, with an emphasis on the 1950s and 1960s, and also gives a platform to the modern roster of artists, musically and in conversation. There are on-point interviews with label veterans Lou Donaldson, Wayne Shorter and Herbie Hancock and with relative newcomers including Robert Glasper, Ambrose Akinmusire, Derrick Hodge, Kendrick Scott, Marcus Strickland and Don Was, president since 2012. There are archived audio interviews with Alfred Lion and Francis Wolff, and a filmed interview with the late Rudy Van Gelder, made shortly before he passed. The soundtrack, as you would expect, is the coyote's cojones.

Also as you would expect, Francis Wolff's photographs, some familiar, some not, figure large in the film. So, too, does rarely seen performance footage of artists including John Coltrane, Art Blakey, Miles Davis, Thelonious Monk, Clifford Brown and Lee Morgan, some of whom are also captured in interview.

The specially filmed performance footage of Robert Glasper and his contemporaries, included as bonus features, is wonderful. As the Blue Note All Stars, Glasper, Akinmusire, Hodge, Scott and Strickland are filmed in the studio recording Glasper's "Bayyinah" and, augmented by Shorter, Hancock and Lionel Loueke, Shorter's "Masqualero." Each clocks in at over ten minutes.

Huber takes care to present Blue Note not as a museum piece but as a living entity. A Tribe Called Quest rapper Ali Shaheed Muhammad and Kendrick Lamar producer Terrace Martin emphasise the importance of its music to hip hop, as a source not only of samples but also of attitude. Glasper, Akinmusire and Scott are particularly eloquent on the socio-political connections stretching from mid-twentieth century jazz to new-millennial hip hop.