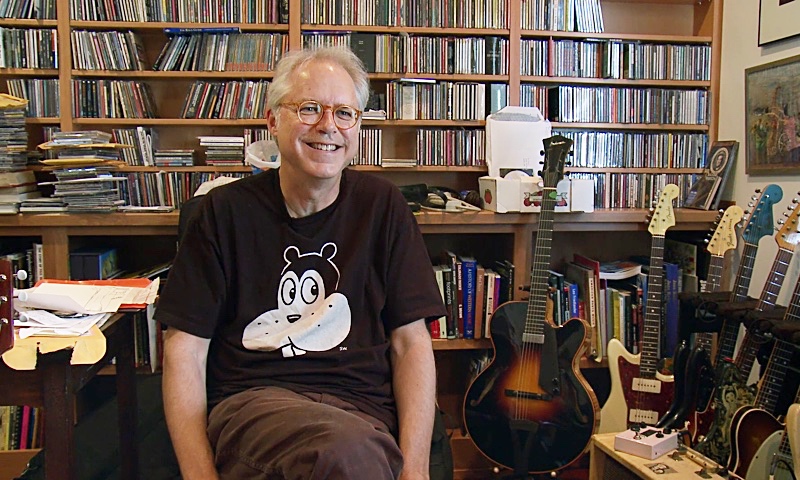 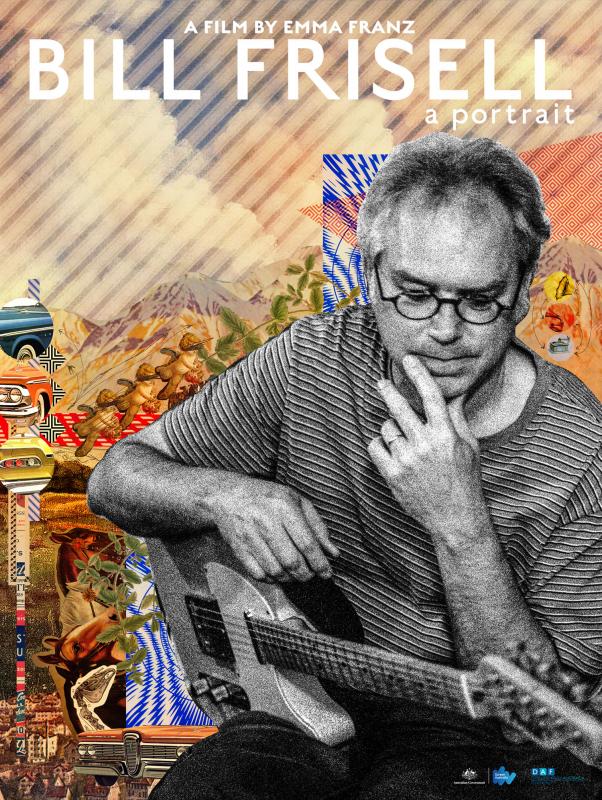 Not long after the film Bill Frisell: A Portrait begins to roll, Bonnie Raitt—one of the many high profile names that lend their thoughts about one of the most influential guitarists and composers of the past forty years to the film, in this guitarist/singer/songwriter's case, having enlisted him as a guest on her last two albums (2012's Grammy Award-winning Slipstream and 2016 follow-up Dig in Deep—describes Frisell as ..."a unifying force amongst so many different musicians. I don't know that many people, in as wide a range of styles of music, that have as much respect for anybody as they do for Bill. He's universally loved."

Not long afterwards, producer Hal Willner—with whom Frisell has worked on many projects, including the guitarist's own Grammy-winning Unspeakable (Nonesuch, 2004)—expands upon the profound respect, admiration and love that he and many other share when it comes to Frisell and his music.

So, it's clear that Bill Frisell is a guitarist, composer and multiple bandleader who may be the nicest, most admirable guy—not just in jazz, but in music, period. But Bill Frisell: A Portrait—Emma Franz's captivating two- hour documentary about an artist who, at a healthy-looking age 65, is a long way from finished but, with hundreds of recorded appearances and a personal discography of nearly forty albums, is long overdue this kind of detailed look—reveals so much about Frisell the musician and the man. A deep thinker who nevertheless tries, when he plays and composes, not to think too much, Frisell may also be one of the most humble, generous and honest artists on any scene, and the beauty of Franz's film is that it comes about as close to capturing just who he is as anyone who has had the pleasure of getting to know him to even a small degree will know.

Building a narrative told without a narrator and, instead, through the words of Frisell and some of the many musicians with whom he's collaborated—as well as an abundance of live, rehearsal and in-the-studio footage of the guitarist playing with some of his many favorite musicians—Bill Frisell: A Portrait is also beautifully edited into a cohesive tale not, nevertheless, unlike how Frisell plays: tangential, sometimes, yes; but always with a core attention to the heart of any song: its story, and how to tell it in as deeply personal a way as possible.

Premiered on March 12, 2017 at the annual South-by-Southwest (SXSW) event in Austin, Texas—which has linked together film, interactive media and music festivals and conferences for the past thirty years—Bill Frisell: A Portrait ends full circle, featuring performance footage of a collaboration with composer/arranger Michael Gibbs that begins, at the start of the film, in rehearsal. At one point, Gibbs tells Frisell: "I want you to soar." "I will," replies Frisell, with his common combination of self-deprecating confidence and humility. "It's just I'm sort of stunned, I don't know what to say [all the while with that huge, sometimes sheepish grin—one of the most genuine, honest smiles that is another of his most common expressions, especially when performing]. It just feels like the inside of my brain; at least, what I wish was the inside of my brain."

That Gibbs is featured throughout the film—but also to both kick it off and close it—was an inspired choice, as it's a case of full circle, with the student now playing on equal footing with the teacher. In the mid-'70s, Frisell's studied with Gibbs during his second time at Boston's Berklee College of Music—having dropped out of the guitar performance program uncertain as to whether or not he'd be able to amount to anything, and returning to his home in Colorado to teach at a music store until he decided to go back to the renowned jazz college, but this time focusing on composition and arrangement. Gibbs and Herb Pomeroy were significant contributors to who the guitarist would ultimately become. Then, after finishing Berklee and moving to Belgium (where he met his wife of almost forty years, artist Carol), Frisell ended up replacing Philip Catherine in Gibbs' touring band of the late '70s—touring the U.K. and other parts of Europe in a group that also included Kenny Wheeler, Charlie Mariano, John Marshall and Eberhard Weber...all artists recording for the German ECM Records label that had begun to build a unique place for itself in the jazz landscape over the past several years, and with whom Frisell would do much of his earliest recording, first as a sideman and then as a leader on three dates beginning with 1983's In Line.

The film approaches Frisell's not-quite-of-this-earth Zen with absolute truth; always a thoughtful interview subject, Frisell takes his time forming just the right words, just as his playing always seems to hit precisely the right notes, though in that case it's more instinctive.

With Frisell it's rarely totally serious or total joke; and there's often the sense that what he says somehow surprises him as it leads to other thoughts...which not unlike how he plays: unpredictably, yet sometimes taking a great deal of time to mine a specific motif, a specific idea, in a way that often leads, often tangentially, to other things. At one point, trying to explain his approach with plenty of pauses peppered between phrases, Frisell says: "Being naive for me...it seems like some of the best things I do are the things I do before I figure out what they actually are."

Frisell's ability to endlessly explore a continually growing (and, by now, frighteningly massive to musicians playing with him for the first time, as Jason Moran relates at one point) repertoire of music has long been a defining characteristic. His music has evolved through performance by a variety of different groups that currently range from his 858 quartet (a classical chamber quartet, with violinist Jenny Scheinman, violist Eyvind Kang and cellist Hank Roberts, where electric guitar substitutes for one of the violins), the Beautiful Dreamers trio (which, with Kang and drummer Rudy Royston, is one of his most curiously configured lineups..but somehow it works) and electro-centric Floratone project, to his longstanding trio with bassist Tony Scherr and drummer/vibraphonist Kenny Wollesen, his John Lennon tribute quartet (Scherr, Wollesen and pedal/lap steel/guitarist Greg Leisz), his current When You Wish Upon a Star quintet, based on his 2016 Okeh release of the same name...and what, based on the film, looks to be a new trio with Royston and pianist Jason Moran. Not only will Frisell mine the same tune with many different groups, he'll do the same thing with a brief phrase during a solo, impulsively exploring a seemingly endless array of minute changes in emphasis, nuanced dynamics and subtle shifts in harmony.

Frisell is interviewed at the Vermont Studio Center, an artist enclave in Johnson, Vermont, where he and his wife spent three weeks. "You apply to go there, and there's about 50 artists there at one time," Frisell described in a 2011 All About Jazz interview: "We both went there at the same time, and we each had a studio," he recounted in that interview. "I knew I was going to record at the end of that period of time, and I already had older music that I knew we [the 858 Quartet] could record. We hadn't recorded in a long time, and there was a lot of material already, so I didn't have that pressure where I felt, 'Oh god, I've got to come up with the stuff.' So I just wrote for the sake of doing it. There really wasn't any pressure—I was just free to write and write and write. So I'd go in every day, and whatever came into my mind, I wrote it down. I accumulated all these pieces of paper; it was just a completely different kind of experience. Then they [858] came at the end of the period—the last couple days I was there—and we just read through some of it, we did a little informal concert for the people up there, and then we went and recorded it."

Frisell's humility is clear when he begins to go through the music written, day-by-day, starting with some of the earliest music": "I hope no one can read music, 'cause there's not a lot happening here, but I just kept on going. Day by day, it's starting to get more dense chords and things developing...and more excruciatingly beautiful melodies are starting to emerge," he says, laughing.

The list of interviewed artists is large, but never superfluous, from brief clips with John Zorn ("Bill's presence would lift everything to his level...even then"), Jack DeJohnette, Paul Simon, Nels Cline and Ron Carter. More in-depth descriptions of Frisell the musician and the person from guitarists John Abercrombie and Jim Hall, and some of Frisell's band mates, including Scherr and, in particular, drummer Joey Baron, who played in Frisell's first trio (and extended groups built around the Frisell/Kermit Driscoll/Baron core) gradually paint the pointillistic portrait of a guitarist and composer with a multiplicity of musical roots...roots that continue to grow with each passing year it seems, and yet he never sounds anything but absolutely, unequivocally and instantly identifiable.

As Frisell shows off some of the many, many guitars in his collection, he talks about how each one draws something different out of him that he can then take to another instrument....but then, something else happens. Unpredictability is clearly a fundamental to Frisell's approach, but what also becomes clear, as he plays some of these guitars, is that, in many ways, they don't really matter. No matter what instrument, amp and/or effects he's used over the years— whether he uses any effects at all, or simply goes for the simple combination of a guitar, a cable and an amp—it always sounds immediately like him. Part of it is physiology—fingers, and the way the fall upon or strike the strings—but much of it is the personal vernacular he's built and evolved over the years, one that includes many open strings and long-held notes with a technique that sounds somehow simple but is, in fact, the opposite. And it's a truth that Frisell might play a simple triad that millions of other guitarists play...but in his hands, it always seems to sound different. Watching Frisell do it, it appears effortless. "The sound has to be in your imagination first, and the you figure out how to get it to come out," he says.

Baron may have some particular funny anecdotes about his time spent playing with Frisell, and talks to the sheer intensity of their work together in Zorn's acclaimed band Naked City; but it's in a later part of the documentary where Baron, with just a few simple words, explains why Frisell is in such high demand, and why he matters so much: "Bill doesn't play bullshit. It's integrity, and who wouldn't want to be around that? Who wouldn't want to find out more about that?"