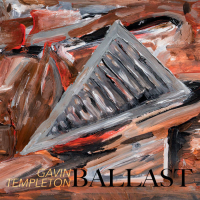 A native of Reno, Nevada, alto saxophonist Gavin Templeton is emerging as one of the leading voices of Los Angeles' suddenly burgeoning modern jazz scene. If the music on Ballast, his fourth album as a leader, is any indication, Templeton might just be on his way to becoming one of the leading voices in modern jazz, period. A product of the California Institute of the Arts, where he studied under Charlie Haden, Joe La Barbera, Swapan Chaudhuri, and Vinny Golia, Templeton is of the same vintage as the members of Slumgum (Jon Armstrong, Trevor Anderies, Rory Cowal and Dave Tranchina), a remarkable jazz quartet whose members are already going on to do amazing things in the music. Templeton's forged significant collaborations with Golia and trumpeter Dan Rosenboom, and has appeared on a clutch of albums with each of them over the past decade or so. Templeton has also recorded with Armstrong, Anderies, Peter Epstein and Nels Cline.

The jazz world is full of talented, energetic musicians with chops to burn and incredible backstories (more about that in a minute). What Templeton manages to do consistently throughout Ballast is convey something deeper. Listening to this disc, one gets the sense that Templeton is baring his soul, playing as if his very life depends on it. And somehow, he's lined up a band with the same attitude. This is what sets Ballast apart. There's something going on here above and beyond the high quality of Templeton's compositions and the amazing musicianship throughout this disc. This music is raw, unfettered, palpably fearless. Yet, in the midst of this swirl of amazing chops and hip jazz moves, there's vulnerability and warmth.

Templeton's colleagues here are as heavy as he is, musically. Fellow CalArts grad Gene Coye has toured with Santana and Larry Carlton, and his acrobatic drumming graces recordings by the likes of Flying Lotus and Brandon Coleman. Like Coye, pianist Joshua White's musical career is grounded in Gospel music, though he's gone on to place second at the 2011 Thelonious Monk International Piano Competition and now works regularly with the likes of Mark Dresser, Damion Reid and David Binney. His piano playing, though highly individualistic, belies a number of interesting influences; from McCoy Tyner and JoAnne Brackeen to Cecil Taylor and Denman Maroney. Bassist Richard Giddens, like Templeton, is a participant in several of Rosenboom's many musical projects. He may have the most unusual background of all of these guys, having left Fresno as a teen only to wind up in the cast of the hit Broadway musical Stomp.

So, the music. Resolutely acoustic, Ballast is all over the map from swinging hard bop to free, and all points between. Yet, Templeton's composing has an immediately recognizable and highly personal modus operandi. Of the eleven tracks, four ("Canto CVIII," "Vexillum," "Waiting Room," and "Zeroes, Ones") are brief improvised sketches under two minutes in duration. Knuckle-busting bass or piano ostinati anchor several of the longer pieces, forming a sort of musical pavement from which Templeton, White (or Giddens), and Coye launch spiraling, adventurous improvisations and variations. Invariably, these patterns break up at some point, dissolving into intense group improvisations or solo forays. On "Fortress," a completely new tonal / rhythmic landscape is briefly established after Coye's solo before the original pattern re-emerges. White's heavy-handed, crashing chords form the basis of "The Program," giving Templeton and Coye the opportunity to go spectacularly nuts in the ensuing improvisation. Giddens mixes it up quite nicely here as well, settling into a hypnotic groove with Coye for White's fascinating inside / outside piano solo. "Strong Ties" is the sort of abstract funk that Coye and Giddens must eat for breakfast every morning. Their attention of dynamics and subtle timbral shadings here, and throughout Ballast, make Templeton's music really come alive. Coye's drumming gets so "out there" during White's solo that it almost crosses into free jazz, but he never lets that groovy thread break completely. By way of sheer contrast, "If Only" is a Satie-esque ballad of extraordinary fragility tempered by the Gospel-like emotional fervor of Templeton's alto. The album's opener, "Contact," is somehow both severe and lush. It's also the sort of emotionally-charged statement that grabs one's attention immediately. Truly, Ballast never lets up from that point.

Regarding the backstory mentioned earlier. Templeton and writer Carlo Wolff hold nothing back in their liner notes. Templeton's wife, Karina, suffers from a rare form of cancer and Ballast is his way of coping with the helplessness he feels when faced with his beloved's serious illness and the never- ending battles one must fight with the nation's health care system. Templeton also has an acute political awareness. "The Program" refers to ex-CIA agent Edward Snowden's reveal of the National Security Agency's massive surveillance effort. Ultimately, Ballast is a nakedly emotional and achingly human document. Beyond all of the badass chops and hip musical acrobatics, the real message of Ballast is never obscured: music can succeed where words fail. Music can save lives.