By Karl Ackermann
June 6, 2016
Sign in to view read count 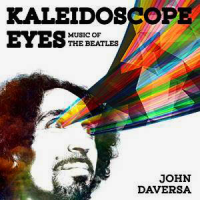 Does the world need another collection of Beatles covers? The same argument could be had about any of the dozens of standards that regularly, sometimes ad nauseam, crop up on new releases. But redundancy is validated each time an Amy Winehouse takes on "Body and Soul" or Avicii reinvents "Feeling Good," and those instances serve as wakeup calls to re-appreciate the originals. There should be little doubt that the works of John Lennon and Paul McCartney—and occasionally George Harrison—need to be included in the vaguely defined category of "standards." On the live recording, Kaleidoscope Eyes: Music of the Beatles, the trumpeter, composer, band leader, John Daversa, shows us why that's the case.

Daversa is still a relative newcomer to the jazz scene though he has an impressive resume including performances at the Montreal Jazz and Montreux Festivals. The Los Angeles based musician released his debut, Junkwagon (BFM Jazz, 2011) with little fanfare despite the appeal of the album. He's led smaller groups and several big bands but his Progressive Big Band is a massive ensemble with forty members, not including a six-person choir and a dozen guest musicians. On Kaleidoscope Eyes he allows the Beatles compositions to unfold into improvisation, developing and shifting momentum and finally interpreting most of the pieces as fresh and contemporary.

"Good Day Sunshine" storms out of the gate, big and brassy with a fine tenor solo from Tom Peterson. Reneé Olstead, primarily know as an actress, smokes the piece with a voice that was made for real jazz singing. The pace slows on the instrumental, "And I Love Her" with Daversa taking the opportunity for an expressive solo while "Lucy in the Sky With Diamonds" weaves in and out of a carnival atmosphere. "Here Comes the Sun" begins on an appropriately pastoral note but turn abstract as it progresses. Olstead returns on "Do You Want to Know a Secret" channeling Eartha Kitt in her sensuous reading of the song. The one instance of Kaleidoscope Eyes faltering is on the ten-plus minute "I Saw Her Standing There," where the parts are greater than the sum. With flat-out aggressive swing, rap, free improvisation and more, the wheels come off the track a bit. Daversa manages to regroup for the rousing finale, "Kaleidoscope Eyes Medley: With a Little Help From My Friends/Ob-La-Di Ob-La-Da/Sgt. Pepper's Lonely Hearts Club Band/I Am the Walrus"

Recording live at the classy Alva's Showroom, a relatively small space in a strip mall in San Pedro, California, would presumably be a logistics issue with this small army of musicians. Despite that challenge, Daversa and his Progressive Big Band do a commendable job of bringing new life to the nearly fifty year old Lennon/McCartney tunes. He has taken a chance with several compositions that are not as frequently covered. Daversa's playing—as well as all of his soloists—is high caliber and exuberant and Reneé Olstead's two distinct vocals are eye-openers. An ambitious, and largely successful, outing from an artist who deserves more recognition.

Good Day Sunshine; And I Love Her; Lucy in the Sky With Diamonds; Here Comes the Sun; Do You Want to Know a Secret; I Saw Her Standing There; Michelle; Kaleidoscope Eyes Medley: With a Little Help From My Friends/Ob-La-Di Ob-La-Da/Sgt. Pepper’s Lonely Hearts Club Band/I Am the Walrus; Untitled.