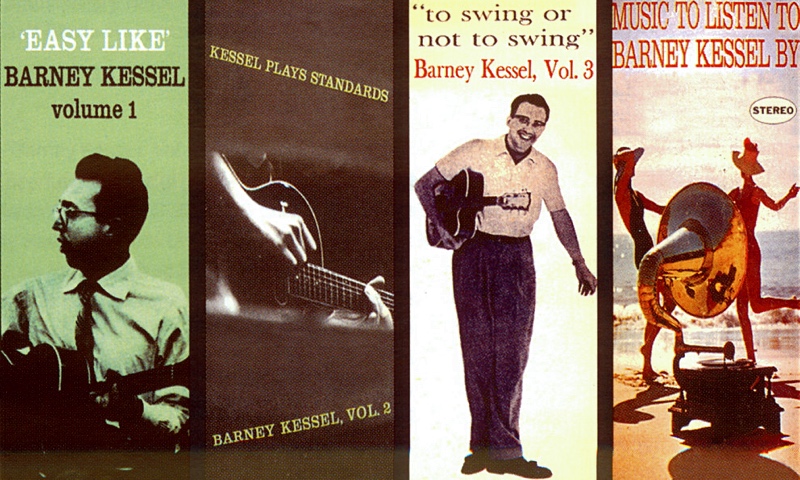 BY MARK BARNETT
June 6, 2016
Sign in to view read count
Getting Started

Beautiful work by a luminary of the jazz guitar. These albums are a showcase for Kessel's skill and sensitivity, and a reminder of how gifted he was as an arranger.

Barney Kessel, perhaps the most celebrated jazz guitarist of the 1950s and 60s, was a disciple of jazz pioneer Charlie Christian, whose earlier work was instrumental in introducing the amplified, or "electric" guitar to jazz.

Kessel spent most of his musical life in and around Los Angeles, which meant countless studio sessions and the opportunity to continually hone his skills. He was technically impeccable and at the same time a creative improviser. On slow ballads his playing had a luminous, melting quality while on up-tempo numbers his attack was crisp, clear and intense. Kessel was also an inventive musical arranger, as you'll hear in these CDs.

Most of Kessel's many albums were issued during the 1950s and 60s by the Contemporary Jazz label. Among the very best of these were the first ones he made. Luckily for us, four of those early albums have been re-issued in this two-CD collection.

We'll concentrate here on three of the four albums: Easy Like, Kessel Plays Standards and Music to Listen to Barney Kessel By. Nearly all their tracks have tightly arranged sections alternating with improvised solos, and this yin and yang—constriction and then freedom—generates a lot of excitement. Kessel uses a variety of wind instruments in these albums—alto and tenor sax, flute, oboe, and a variety of other woodwinds— but practically no brasses, perhaps to achieve a more mellow, woody tone. In all three albums, Kessel surrounds himself with top-flight, technically proficient musicians able to follow his split-second arrangements. But as you'll hear in their improvised solos, they can also play with drive and creativity. Pay particular attention to the work of Shelly Manne, a marvelous jazz drummer who appears on nearly every track. He's an absolute master of "tight but light" drumming: propulsive, tense as a coiled spring, pushing the music forward, and yet never loud or intrusive, never stepping on the toes of the other players. The fourth album, To Swing or Not to Swing, a traditional swing-era jam session, is in a different genre from the other three.

This written-on-the spot tune (not to be confused with the 1980 country music hit of the same name) is a joyful introduction to Kessel's arranging style. Listen to how the arranged and improvised parts alternate, and to the lyrical yet hard-driving work of the other players—all of this underlined by Manne's tight drumming.

The track opens with the melody played in unison by guitar, piano and alto sax. From 0.14 to 0.20, listen to the brief but tight interplay between guitar and sax. At 0.36, Kessel launches a nice improvised solo, followed by sax at 1:05 and piano at 1:36. At 2:04, it's back to the written stuff for a repeat of the opening.

This beautiful song, written in 1943 for the musical "One Touch of Venus," has an impeccable pedigree: music by composer Kurt Weill, words by poet Ogden Nash. Be sure to listen to Sarah Vaughan's version, recorded live in 1958. But be ready for a downer—this is possibly the most angst-filled song in the Great American Songbook. You may want to wash it down with a Bugs Bunny cartoon or two.

Kessel's wordless version, taken at a medium-fast pace, leaves melancholy behind and concentrates on the tune. In the first third of so of the track, played in unison by guitar, oboe and piano, Latin rhythms alternate with a driving jazz beat, generating more excitement than either could alone. At 1:21, Kessel takes over for an extended improvised solo, and then at 1:17 it's back to the opening arrangement. Listen for the bit of dissonance inserted at the very end.

This is a nice song (you can listen to the Peggy Lee version first), but it's hardly a classic. Yet Kessel & Co. make something wonderful of it, a perfect, self- contained answer to the question, "What is jazz?" In fact I've used this track to help beginners understand jazz, and the little nods and smiles tell me it works.

Kessel's "Slow Boat" opens with the tune played straight and in unison by guitar, piano and tenor sax. Then, beginning at 0:31, the musicians take turns interpreting the melody—first piano, then sax, then guitar. Notice that each solo follows the same pre-ordained pattern: first a bit of scored introduction, then a measure of "stop-time," in which the rhythm section is silent for a moment, leaving the soloist playing alone, and finally two choruses of improvisation. (In the stop-time portion of Kessel's solo, Shelly Manne violates the silence with a bit of nifty drum work, which just makes things better.)

All three solo improvisations are outstanding, creating beautiful and original variations on the melody without letting it slip away. You might want to include this track in your "Lost on a Desert Island" list.

Possibly the most beautiful recording of this Gershwin tune is Ella Fitzgerald's 1954 rendition, on the album titled Pure Ella. Listen to this first, then go to Kessel. His version Is pure and simple: a few alternating solos between guitar and oboe, and not a lot of improvisation—he's just letting this gorgeous melody play out naturally.

The track opens with a straight rendition by solo oboe backed by guitar, and then at 0:35, Kessel takes a turn at playing the melody straight. At 1:03, listen for a bit of counterpoint, with the oboe playing behind the guitar. Then it's back to a guitar solo, and at 1:35 more counterpoint, this time with the guitar playing behind the oboe. At 2:07, a little improvisation by Kessel (notice the bit of "Oriental" flavor here), and at 2:39 the piece closes out with another oboe solo with guitar counterpoint.

Like "North of the Border" (track 12), this is a written-on-the-spot kind of tune, partly arranged, partly improvised. It's taken at a very fast pace, and yet despite the breakneck speed, the ensemble playing is crisp and clean and the solos are logical variations on the original melody. Think of it as tightly controlled frenzy, and notice how the discipline makes it all the more exciting.

The basic theme is laid out first, with Manne adding tight drum interjections. Notice at 0:32 the way he inserts a quick roll on the snare drum to kick the music in the pants and push the players into another arranged segment. Then listen closely to the interplay between the dominant tenor sax and the subsidiary guitar.

At 1:01, a piano solo that manages to be delicate despite the speed; at 1:28 a solid tenor sax solo; and then at 1:55, three choruses of nice guitar improvisation. At 2:49, more counterpoint between tenor sax and guitar, and finally at 3:02 the ensemble returns to the basic theme to close things out.

These three tracks are from the album "Music to Listen to Barney Kessel By," recorded several years after the first two albums. Here Kessel expands his palette of wind instruments to include clarinet, bass clarinet, oboe, bassoon, flute and English horn. It yields a lush, intriguing sound, a treat for the ears (although some of the meticulously arranged tracks are barely jazz).

You've probably heard this tune without knowing its name. It was written in 1933 by Vincent Youmans for the hit Astaire-Rogers movie, "Flying Down to Rio." Kessel treats the tune essentially as written, but he uses contrasting rhythms and textures to create excitement. (All those woodwinds really help!) The result is a joyous feast of sound, with lots of room for some wonderful drumming.

The track begins with Kessel stating the theme, accompanied by the assembled horns. Then at 0:21, Kessel plays the main melody with a Latin beat underneath. At 0:42, there's a sudden, exhilarating switch to a standard jazz beat, with Kessel improvising on the melody. At 1:03 it's back to the Latin beat with everyone playing the melody in unison (and someone playing castinets!).

At 1:37, listen for a remarkable dialogue between guitar and drums, a musical conversation in which Shelly Manne proves that in the right hands, the drum can be an expressive "instrument," not just a tool to mark the beat.

At 3:17, a return to the basic theme, stated by the guitar and answered by the ensemble. At 3:38, the piece is closed out with guitar improvisation over a strong jazz beat.

A delightful song by Rogers and Hart, with chuckle-out-loud lyrics filled with puns and internal rhymes. Before dipping into Kessel's rendition, be sure to listen to Mel Torme's recording of this song, on an album called Live at Marty's. (Torme made other recordings of "Greenery," but the one at Marty's is by far the best.)

Kessel's version is an exercise in suspense. He teases us with the unexpected, then gives us what we've been wanting all along, then teases again. The roller coaster ride is exhilarating. Right from the start, he flirts with the melody, surprising us with a bit of dissonance and depriving us of a steady beat. "Okay, when does it start?" we're thinking. At 0:43, we think we're getting the answer as he begins to give us our jazz fix with a regular beat, but he reverts almost immediately to rhythm-less dissonance. At 1:03, we get what we've been waiting for, an extended, improvised guitar solo over a solid jazz beat, and then at 1:45, a very nice solo on bass clarinet. At 2:10 a piano solo, and then at 2:30, various combinations of instruments create more delightful dissonance. At 2:51, a Shelly Manne drum roll seems to say, "Okay, enough of this, let's play some jazz." Bang, the ensemble plays the melody straight and in unison, giving us a nice sense of release, and that continues to the end of the track.

This great, happy Gershwin tune, written in 1924, seems to have been made for jazz, and its best vocal interpretations are by Mel Torme. Before proceeding to Kessel, listen to the recording Torme made with the Marty Paich Dektette.

Kessel begins his version with the same tantalizing approach he used in "Mountain Greenery," giving us a stretch of rhythm, then taking it away, then bringing it back. And all the while, Shelly Manne's drumming keeps the whole thing glued together.

At 0:44, a solid jazz beat takes over, with an extended guitar solo that seems a bit anticlimactic after all the opening fireworks. At 1:49, it's back to complex ensemble playing until the end.