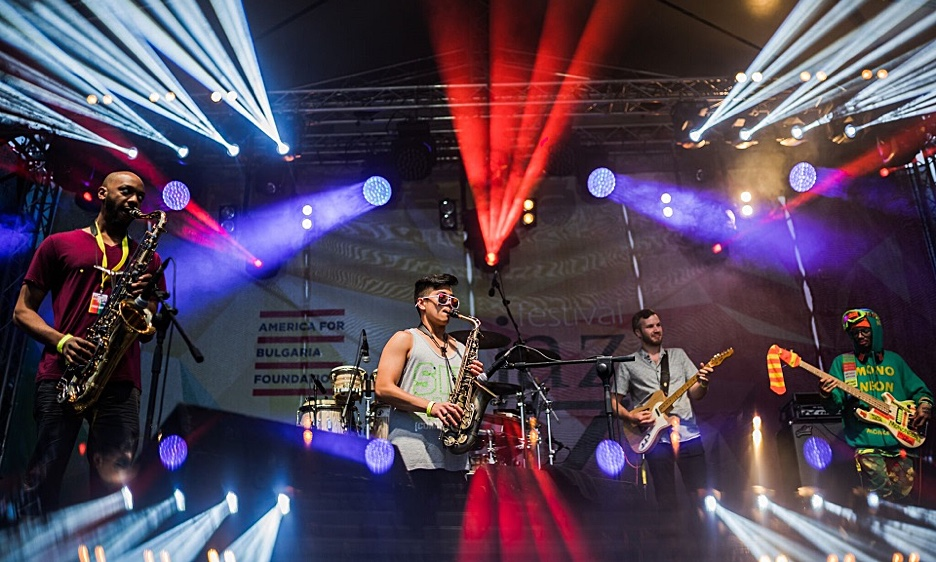 We could charge forty Euros a day and have just a few hundred people here, or we can make it free and bring all these thousands of people in —Peter Dimitrov, Artistic Director, A to JazZ Festival

Jazz on a summer's day. There's nothing quite like it. To see Sofia's South Park II packed with somewhere between fifteen and twenty thousand people for three days of jazz, where a veritable sea of good vibes held sway, was an uplifting sight.

That people came in such numbers was chiefly due to the fact that A to JazZ Festival is a free festival. As festival founder and director Peter Dimitrov said: "We could charge forty Euros a day and have just a few hundred people here, or we can make it free and bring all these thousands of people in."

To be sure, not everyone who came to South Park II over the three days was there specifically to see Christian Scott aTunde Adjuah or Ghost- Note. It's quite possible, in fact, that many in attendance had never even heard of them. But that's not important. Just bringing people to the music, whether they know it or not; that is the point of A to JazZ Festival.

"There's a lost generation in Bulgaria," explained Dimitrov, referring to the children of the last decades of Communism, who grew up listening to the state- approved, national folk music of their parents' generation. "Ours is like a cause to bring them the world of music."

For the past eight years, A to JazZ Festival has done just that, with a roll call of artists including Christian McBride, Dianne Reeves, Roy Hargrove, Robert Glasper, Branford Marsalis, Kurt Elling, Michel Camilo and Jazzmeia Horn, to name but a handful of the A-listers who have graced the festival's main stage.

That American artists have dominated the programme should come as no surprise, given that the festival's main sponsor is the American Foundation for Bulgaria.

Since 2009, AFFB has supported Bulgaria's private sector and its democratic institutions, though American aid has been effective here since 1989 with the implementation of the Support for East European Democracy Act. In the aftermath of the collapse of Communism, SEED's aim has been to promote the transition to the free market and democracy. Significantly, this aid is not inter-governmental, but from private entity to private entity, therefore maximizing the power of donations.

In the case of A to JazZ Festival, the generosity of AFFB has ensured that Sofia enjoys the international prestige of a world-class jazz festival, while tens of thousands of Sofians' lives have been enriched by the music and the edifying experience of participating in such a joyous, communal gathering. And you can't put a price on that.

It's a far cry from the old days, when, according to Bulgarian jazz historian Vladimir Gadjev, writing in the Bulgarian chapter of A History of European Jazz: The Music, Musicians and Audience in Context (Equinox Publishing, 2018), no American jazz band visited Bulgaria between 1928 and 1978.

Nor is this exactly the sort of Cold War diplomacy typified by the famous Jazz Ambassadors programmes of the 1950s—1970s, but it does underline just how prescient war correspondent Burnet Hershey's words were, when he observed in 1922 that "jazz follows the flag."

AFFB, to its credit, has certainly left its mark and, even after just nine editions of A to JazZ Festival, a lasting legacy. There were no American flags flying in South Park II, but instead there stood some five hundred trees planted by the American aid programme. Between the trees, festival goers hung hammocks and rested in the shade, providing a beautiful metaphor of sorts.

And it was that kind of festival. Families with baby strollers pitched up. Groups of friends picnicked together. Children and tots were everywhere, running around or enjoying the music from the vantage point of a parent's shoulders. Daily outreach in the form of a Jazz for Kids programme sought to engage with the youngest children; stars perhaps, of future editions of A to JazZ?

There were dogs galore, chasing balls and sticks to their hearts content. A dedicated sports area offered humans an alternative to stick-chasing, with table tennis, badminton, volleyball and a mini-football pitch all seeing action. Frisbees cut graceful arcs through the warm summer air and bubbles were blown.

Czech beer, cocktails and Italian spritzers provided chilled relief from the hot sun. In the evening, as the light faded and the mountains were silhouetted against the blue-night sky, the multi-colored flashing neon lights of plastic gizmos dotted throughout the crowd created a scene like something from a Grateful Dead concert.

As dusk encroached, the music increasingly became a magnet for ever larger numbers of people, with a huge crowd captivated by third night headliner, Jacob Collier. The main stage also featured some of the best Bulgarian jazz musicians, exhibiting varying degrees of folkloric influence. For those with stamina, late-night jam sessions in Bar Caché, on the edge of the park, burned fiercely into the small hours.

Finally, a half-day conference—see separate article —on day one set out to offer practical advice to Bulgarian musicians on how to equip themselves for a career in music.

It was a little bit of a thankless task for Romanian band JazzyBIT to open the festival 6:00pm, as there was only a small crowd gathered in front of the stage. Still, the audience showed its appreciation for the trio's upbeat, contemporary piano jazz. Bassist Mihai Modloveanu and drummer Szabo Csongor-Zsolt plied tight, funk and pop rhythms, while pianist Tendor Pop roamed more freely.

Notable, were the GoGo Penguin-esque "Le Tunk" from Horizon (2016) and the Latin-infused show-stopper "Curacao" from the trio's debut album, Touch the Sky (2014). On the latter, Pop's tumbling piano lines gave way to a vamp, as his right hand worked the Nord organ keys feverishly. Imagine Michel Camilo reinventing Tito Puente's "Oye Como Va" and you might get some idea.

With its contagious energy, short but exciting solos, and hook-laden tunes, JazzyBIT was a sound choice for |A to JazZ 2019's opening act, taking the audience along with it for the ride.

Energetic tunes from Elephunky Trip (Time Warp Music, 2018) kept the crowd moving and grooving, spiced by solo interventions from the excellent Yanev and the two horns. "Why" and "Getting Better" featured the tremendous rapping of Boyan Lechev, whose rhythmic drive was matched by his articulate delivery. Tiffani Blu and Yanev shone on the cooking blues-funk "Play The Game"; shimmering Hammond waves and sassy vocals colored the Chaca Khan-esque "Fight Fire With Fire."

Upbeat and feel-good throughout, Koka Mass Jazz paid homage to the Bulgarian capital on "Sofia's Street Light," with Tashev on fire. The uber-funky "Smile" got everybody clapping, while the band whipped up a collective storm on "By Myself" and the multi-layered, surging set-closer "No More." A terrific performance from a tight outfit that really kick-started |A to JazZ. The high-powered funk of Koka Mass Jazz would light up just about any festival stage.

Once described by the Chicago Tribune as like a cross between Ian Anderson and Thelonious Monk, Bulgarian kaval player Theodosii Spassov is revered throughout the Balkans—and far beyond—for his virtuosity. His collaborations, as varied as they are numerous, include Trilok Gurtu, Dave Liebman, Rabih Abou-Khalil and Billy Cobham. On the |A to JazZ stage, Spassov was reviving a folk-cum jazz project from a decade ago, his nine-piece band featuring an electric jazz quartet and a five-piece acoustic folk ensemble -the latter prominently featuring gadulka (an oud-like bowed instrument), gaida (bagpipes) and folk drums.

From the get-go, Spassov's kaval, Peyo Peev's gaduka and Ivan Georgiev's gaida wove seamless unison lines, each in turn peeling off to solo. The juxtaposition of Nikolay Karageorgiev's electric guitar and Peev's gaduka soloing back to back was striking, but the most thrilling passages came when the nine-piece locked into frenetically charging unison lines.

Electric bassist Alexander Lekov and pianist Miroslav Turriyski led the way on a slower number, with the folksy refrain giving way to a multi-voice call and response of bluesy character. Folk melodies provided the canvas for Spassov's orchestrations, and despite the modern rhythms and fizzing virtuosity, the music sounded a little closer to Balkan folk traditions than to jazz. Whatever idiom the musicians traded in, both the solos and the intricately spun ensemble passages were thrillingly seductive.

At the head of the charge was Spassov, whose most fluid solos took wing spectacularly. In full flight, the kaval player sparked the crowd's enthusiasm and drew dizzying responses from the frontline trio of Peev, Georgiev and Karageorgiev. On one tune, an unaccompanied flute intro of haunting quality suggested a ballad, but the notion was dispelled by drummer Nacho Gospodinov, whose lively beat broke the reverie and ushered in a series of tearaway solos delivered at breakneck tempo. It proved to be the finale of an exhilrating concert.

The clue is in the name. The reclaiming of his ancestral (Benin) heritage lies at the heart of Christian Scott aTunde Adjuah's music—a wholehearted embrace of African American jazz tradition and contemporary influences. It reflects the philosophy of a man rooted historically, but with an eye very much on the here and now. This was a performance of passion and political resonance.

The musical bridge spanning eras was potently sounded in the meeting of Corey Fonville's electronic drum-pad rhythms and Weedie Braimah's djembe on the pulsating opener, "I Own The Night." This was one of several compositions from Ancestral Recall (Ropeadope/Stretch Music, 2019) the leader's fourteenth album as leader/co-leader.

For his European tours these past few years, Scott aTunde Adjuah has turned to Polish bassist Max Mucha, a beautifully flexible player with impeccable timing and natural buoyancy. With long-standing pianist Lawrence Fields, and alto saxophonist Logan Richardson to boot, this was a powerhouse sextet and no mistake. Scott aTunde Adjuah lavished praise on Richardson, describing him as a game-changer on the alto saxophone, not so much for his technical facility as for his soulful sincerity, though both were evidenced during his solo on the uplifting "Songs She Never Sang."

There was post-bop fire on Herbie Hancock's "Eye of the Hurricane," with Fields, Scott aTunde Adjuah and Richardson trading breathlessly back and forth to loud cheers from the crowd. The loudest cheers, however, were reserved for Fonville's thunderous spot. The funky "West of the West" pitched horns together in piercing unison, though it was Field's ingenuity on organ, following the leader's own imperious solo, that arguably stole the show.