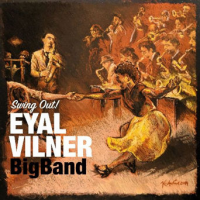 Eyal Vilner's fourth album as leader of his impressive New York-based big band is a throwback to the kind of concert dates audiences no doubt derived great pleasure from during the storied Big-Band Era well over half a century ago when groups not far removed from this one in spirit traveled cross-country by bus, car or train to ply their trade in nightclubs, concert halls, schools and any other accessible venue. Vilner spices the menu with blues, ballads, boogie and swing, flag-wavers, gospel, a touch of Latin and plenty of vocals, most of them delivered with flair by the high-spirited Brianna Thomas. As a change of pace, one of the more popular vocals of the World War II years, the Andrews Sisters' "Bei Mir Bist du Schoen," is performed as an instrumental.

Vilner, who wrote the sunny opener, "Downhill," and the irrepressible "Going Uptown" (the last enfolding splendid trumpet solos by Brandon Lee and Michael Sailors), also arranged all of the album's dozen numbers and solos brightly on alto sax and clarinet. Even so, he is by no means the whole show. The ensemble shines throughout, while the muscular rhythm section, firmly anchored by drummer Eran Fink, provides staunch and unflagging support regardless of mood or tempo. The music was written with dancers in mind, and the energy and enthusiasm that permeates a dance floor is palpable.

As for the program, it consists of a pleasing blend of originals, standards and one paean that many church-goers (and Mahalia Jackson fans) would recognize, "I'm on My Way to Canaan Land." Ellington is represented by "In a Mellow Tone," W.C. Handy by "St. Louis Blues," Gus Kahn / Walter Donaldson by "My Baby Just Cares for Me." Thomas is heard on each of them, as she is on "Dinah," "5-10-15 Hours" and "Canaan Land." The band's second vocalist, Brandon Bain, is out front on the ballad "That's All." The other instrumentals are the trad favorite "Do You Know What It Means to Miss New Orleans" and danceable "Big Apple Contest" (from the 1939 film Keep Punchin'). Other soloists of note include trumpeter James Zollar, tenors Evan Arntzen and Michael Hashim, trombonist Mariel Bildsen, bass trombonist Ron Wilkins and pianist Jordan Piper. Two guests also lend a welcome hand: Andrew Millar (washboard) on "Dinah," and Itai Kriss (soaring flute solo on "Canaan Land" with echoes of Juan Tizol's "Caravan" in Vilner's expansive chart).

While those who lean toward more contemporary big-band sounds may shrug their shoulders or roll their eyes at Swing Out!, others who remember fondly the golden age of big-band ascendancy will no doubt warmly embrace Vilner's decision to step back and let the music swing in the manner of such legendary ensembles as Basie, Henderson, Lunceford, Herman, Kenton, Ellington and the many others whose names are synonymous with an era that won't be coming back but whose indelible memory lives on in the hearts and minds of those who were lucky enough to have seen and heard them.

Downhill; In a Mellow Tone; Dinah; Do You Know What It Means; St. Louis Blues; That’s All; Big Apple Contest; My Baby Just Cares for Me; Going Uptown; 5-10-15 Hours; Bei Mir Bist Du Schoen; I’m on My Way to Canaan Land.