Don Pullen developed an extended technique for the piano and a strikingly individual style, post-bop and modern, but retaining a strong feeling for the blues. He produced acknowledged masterworks of jazz in a range of formats and styles, crossing and mixing genres long before this became almost commonplace. By chance, unfortunately for his future commercial success if not for his musical development, his first contact on arriving on the New York scene was with the free players of the 1960s, with whom he recorded. It was some years later before his abilities in more straight ahead jazz playing, as well as free, were revealed to a larger audience 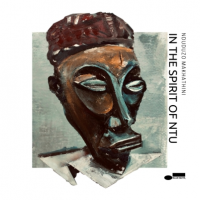 There are strong links between London's alternative jazz scene and the parallel and burgeoning one in South Africa. A case in point is the connection between South African pianist Nduduzo Makhathini and British tenor saxophonist and clarinetist Shabaka Hutchings. Makhathini and Hutchings' similar ages and overlapping, cosmologically informed takes on jazz meant they were ...

All About Jazz is celebrating Don Pullen's birthday today! Don Pullen developed an extended technique for the piano and a strikingly individual style, post-bop and modern, but retaining a strong feeling for the blues. He produced acknowledged masterworks of jazz in a range of formats and styles, crossing and mixing genres long before this became almost ...