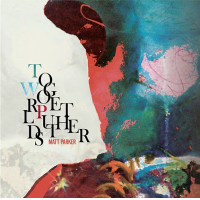 Saxophonist Matt Parker is an old soul. You can hear that in his music. On his debut release Worlds Put Together, he channels Lester Young, Coleman Hawkins, and Dexter Gordon. It's just that this jazz geezer happens to be 33 years old.

Like Lester Young, he creates music without typecasting it as "jazz." It's just that his enunciation, inflection and accent are dead giveaways that mark him as a jazzman.

Parker's music recalls the period of the late-1960s or early 70s when Eddie Harris or Rahsaan Roland Kirk might open a show for Santana or Cream; music wasn't ghettoized. Kirk's music comes to mind often here. He opens with the bawling, two-horn (Julio Monterrey on alto) "Eye Of Rico," a hurricane song that howls itself into the calm eye provided by pianist Jesse Elder. The pianist is a proper foil for Parker, as the pair co-lead The Candy Shop Boys, a burlesque, cabaret, vaudevillian act. The saxophonist has an appreciation for the irreverent. On "Alien Baby," he mixes bits of Albert Ayler's burning supplication against some Dick Dale-style guitar, via Josh Mease, then slinks home with the gentle twinkling of Elder's piano.

Parker can't be pigeonholed into just one tradition. Like Roy Nathanson's Jazz Passengers or John Lurie's Lounge Lizards, he regards this music as a pageant. That means fun. He plays in a duet with tap dancer Jimmy Sutherland on "WPT" and creates a circus sing-a-long waltz on "Zeynep's Piano" with a small cast of exuberant children. His one cover, "Darn that Dream," a duo with Monterrey, merely hints at the melody. The music here is more folk than metro. He adopts handclaps and percussion on an African inspired "Up And Down" and his "New Bossa" (played twice here) has the flexibility to be both a sentimental saunter or a sardonic sizzler. The saxophonist sounds comfortable promenading down multiple paths.