Wheelhouse: Boss Of The Plains 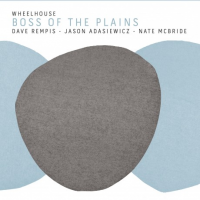 Listening to the improvising trio Wheelhouse, one might get the distinct sensation of being inside of a dream.

One of two inaugural releases for saxophonist Dave Rempis' Aerophonic Records label, Boss Of The Plains, documents the evolution of Rempis, vibraphonist Jason Adasiewicz, and bassist Nate McBride}}'s collaborative trio. This band, which was formed in 2005 to present each player's compositions, gradually morphed into this wholly improvisatory chamber jazz format.

Rempis first came to national attention as Ken Vandermark's first lieutenant in the Vandermak 5. His burly sound powered fourteen releases before the V5 was dismantled. He does continue on with Vandermark's projects, The Resonance Ensemble and Territory Band.

He has developed several outlets for his own music; the two-drummer Rempis Percussion Quartet, the sax-cello-drums Ballister, and The Engines with McBride. The bassist also collaborates with drummer Mike Reed and Adasiewicz in Sun Rooms.

The ten pieces presented here float in ruminating glances. The drummer-less trio invites stillness as its fourth member. Rempis delivers with a stoicism, eschewing volume for eloquence. He plots a patient path, blowing breathy passages and considerate extended technique. He cuts loose just once on "Song For Teens" spitting rapid fire notes against the pounding vibes and heavier plucked notes of Mcbride. When he swaps out his alto for a baritone saxophone on "Song Heaven," the swathe of sound registers deep within the solar plexus. Both Adasiewicz and McBride act as resonant partners, delivering echoing passages to fuel the dream.

A wise monk once said, "It would be strange if our life were really part of someone else's dream. Our life might seem long and tedious, but it would pass in the blink of an eye for that dreaming person."