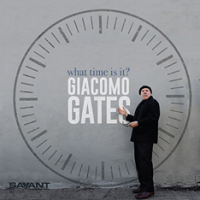 What is it that separates a "jazz singer" from the wannabes? While many people are known as or call themselves jazz singers, only a handful truly merit the name. Giacomo Gates, whose latest album What Time Is It? is his seventh (and fourth for Savant Records), is one of the chosen few. Why? Well, as the saying goes, if you have to ask . . .

The fact is, Gates has a pleasant baritone voice but not a great one. What sets him apart from so many others is his unflagging awareness of the music's undercurrent, pulse and substance. There's no affectation, simply unpretentious (and swinging) storytelling that never fails to charm. Whether singing or scatting, every phrase that Gates utters is as clear as the proverbial bell. In keeping with that, Gates has chosen hip themes by Tadd Dameron, Oscar Brown Jr., Eddie Jefferson, Lee Morgan, Betty Carter and others, each of which is explicitly tailored to suit his contemporary approach. He also sets to music a poem by Tom Robbins, Villa Incognito, deftly reshaping it as "In Cognito," and appends a composition of his own, the cerebral, spoken-word "Too Many Things," to ring down the curtain.

To set the theme, Gates opens with more spoken words as a prelude to the venerable Rodgers and Hart standard "I Didn't Know What Time It Was," his supple vocal leading to burnished solos by guitarist Tony Lombardozzi and tenor Jerry Weldon. Dameron's easygoing "On a Misty Night" is next, followed by Brown Jr.'s bluesy "Somebody Buy Me a Drink" and the 1957 pop hit "Silhouettes." Brown Jr. also wrote the witty and emphatic "Mr. Kicks," Chet Baker's drummer Artt Frank the waggish "A Few Bucks Ahead." Completing the menu are Carter's "I Can't Help It," Jefferson's wry "Disappointed" and Morgan's "Spinnin'" (a.k.a. "Speedball").

While the debonair Weldon and Lombardozzi don't play on every track, their presence is always welcome. The other members of the group—pianist John di Martino, bassist Lonnie Plaxico, drummer Vincent Ector—are similarly sharp and proficient. Laudable as they are, however, it is Gates' inimitable persona that carries the day. A sparkling and sophisticated anthology with no down time.

I Didn’t Know What Time It Was; On a Misty Night; Somebody Buy Me a Drink; Silhouettes; In Cognito; Mr. Kicks; A Few Bucks Ahead; I Can’t Help It; Disappointed; Spinnin’ (Speedball); Too Many Things.