John di Martino is a composer, arranger, jazz pianist, producer and educator, based in New York City.  He is described as a "shape-shifter", for his creativity across musical genres.    John composed the music for the documentary series: “A Glimpse Of Paradise"   ( Prospera Medienproduktion ) aired on Europe’s Arte Channel, and music for the video games: "Batman: The Telltale Series" Mr. Di Martino latest CD’s are: “Passion Flower” ( the music of Billy Strayhorn ), Featuring Raul Midon, Eric Alexander, Boris Kozlov,and Lewis Nash,  and: “Mazel” ( Yiddish Songs, re-imagined ), with Janis Siegel and Cantor Daniel Krammer 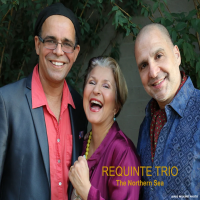 A pianist from jny: Philadelphia, a singer from Brooklyn and a percussionist from Bahia walk into a bar... Fingers, voices and rhythm. A lingering sweetness on your lips from the night before, and a quick inhale the morning after. The richness and passion of The Northern Sea. Pianist/arranger John di Martino hails from the City Of ...

Pianist/composer/arranger/producer John DiMartino is a first-call veteran of the New York City jazz scene. This multi-recorded artist has long been a favorite of singers for his gigantic ears and intuitive, uncluttered playing—rare gifts which also enhance any instrumentalist he accompanies or arranges. All of these talents inform DiMartino's splendid Billy Strayhorn tribute, Passion Flower, where he ...

There always seem to be albums coming out that pay tribute to accomplished jazz composers. Here are some newer ones, three on very familiar names and one on an often overlooked musician. John Di Martino Passion Flower: The Music of Billy Strayhorn Sunnyside Records 2020 Pianist John ...

Composer / arranger Billy Strayhorn was barely twenty-three years old when he first met bandleader Duke Ellington, an encounter that would lead to a collaboration that lasted more than half of Strayhorn's life. During that time, Strayhorn wrote some of the Ellington orchestra's most acclaimed and enduring songs including “Lotus Blossom," “Chelsea Bridge," “Isfahan" and, most ...

When esophageal cancer took Billy Strayhorn's life in 1967, his work and legacy rested squarely in the shadow of Duke Ellington's world. More than half a century later, though the two figures remain inextricably linked, Strayhorn's genius has moved past the penumbra of his legendary collaborator and employer, occupying its own clear place in the jazz ...