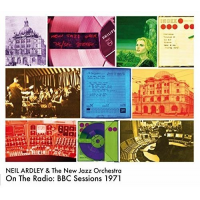 An hour's worth of archival Neil Ardley and the New Jazz Orchestra is always a welcome event since it features the cream of British jazz from the late 1960s, early 70s. But this CD is split into two half hour programmes. The first is a live recording of Neil Ardley conducting the New Jazz Orchestra for the BBC Jazz Club programme, which was first broadcast on February 14th 1971. The second half is also a BBC recording, but for Radio 3's Jazz In Britain, first broadcast September 27th 1971 and is a suite composed by Neil Ardley and Keith Winter entitled "The Time Flowers."

The added bonus of the first broadcast is the quite unusual retention of Humphrey Lyttelton's highly informative announcements. But Humph was not without a very dry sense of humour as witnessed by the example of his typical urbane wit introducing Barbara Thompson's labyrinthine "Terre De Miel," Humph disingenuously refers to himself as having attended "Slough Grammar School" (he actually attended Eton College near Slough).

On the opener, George Russell's lively "Strastusphunk," Henry Lowther, Frank Ricotti, Derek Wadsworth, Dave Gelly and Brian Smith all solo whereas on Mike Gibbs's "Tanglewood '63," Harry Beckett and Dick Heckstall-Smith solo, the latter on tenor and soprano. The following two tracks which segue together seamlessly, are Mike Taylor's "Half Blue" and "Pendulum" on which Ian Carr solos on flugelhorn with typical elegance. In many respects these are the two standout tracks on the album. Taylor was an overlooked genius and his memorable compositions reflect this, utilising perfect arrangements and a rich array of tonal colour and exuberant harmonies.

The final number of the first set "The Immortal Ninth," was composed by Cream bassist Jack Bruce who played double bass on arguably the zenith of the NJO's recordings, Le Déjeuner Sur L'Herbe. This is a rare opportunity to hear the tune Bruce wrote especially for this big band. Another version can be heard on Bruce's 1995 album Monkjack recorded with Bernie Worrell.

The second set is more complex. It was probably pigeon-holed as "experimental" music at the time and the half hour piece was co-composed by Neil Ardley and synthesizer expert Keith Winter (who also appeared playing VCS3 on Ian Carr's Solar Plexus. {Ian Carr}}, Don Rendell, Frank Ricotti and Barry Guy are the four featured soloists. Carr solos on flugelhorn and later on Harmon-muted trumpet. At times, Carr's playing, underpinned by the London Studio Strings, is reminiscent of his masterwork, the "Northumbrian Sketches" suite, recorded for the 1988 album Old Heartland.

Occasionally, the synthesizer is noticeably vying for pole position amongst the horns and Barry Guy contributes swirls of amplified arco double bass, his virtuoso status very much in the ascendant. The music oscillates, sometimes wildly, from contemporary classical, often with a neo-romantic flavour, to out and out avant-garde married with bursts of electronica. Although it may not be Ardley's best or most memorable work, as an archival rarity it is undoubtedly an important testimony to the sounds that were emerging on the scene in the early 1970s, in the wake of psychedelic and progressive rock and nascent fusion. Also significantly, the BBC at that time was more enlightened in terms of the amount of airtime it was prepared to afford contemporary music.

With both sets on one CD weighing-in at an hour's worth in total and in clear stereo too, there's naturally an interesting comparison with Dusk Fire's previous archival release by the New Jazz Orchestra Camden '70. It also begs the question, how much more priceless jazz recorded for BBC radio shows is still extant and yet unreleased?