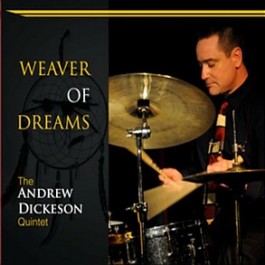 Australian drummer Andrew Dickeson makes a strong recording debut as leader with a well-chosen selection of standards. Dickeson has been a sideman for over 25 years, having begun his professional career when he was 13. Born into a musical family, he began playing the drums when he was 10. He moved briefly to New York in 1991 where he studied with Art Taylor and Vernel Fournier and was a finalist in the 1992 Thelonious Monk Institute International Jazz Drums Competition. After returning to Australia , Dickenson graced the rhythm chair for a host of musicians including Lee Konitz, Martin Taylor, Annie Ross and Warren Vache. After all of his experiences, he felt that the time was right for this recording. With the concept firmly etched, he formed his band and set out on his journey.

Interpreting standards could well lead to comparisons, but they can stand on their own and provide a fresh perspective as the music on this CD does. The band is strong and evokes images that capture the imagination.

Dickeson sets the pulse for "Ill Wind" which blows a lot of good. The arrangement ushers in tonal shifts, the floating head settling down and then gradually heating up through the tenor saxophone solo of Roger Manins. He has a fluid sense of expression bringing in swing and tensile notes that bend ever so deliciously in a fermenting pool of ideas. Trumpeter Eamon McNelis's phrasing is taut and driving and while he gives the tune another edge, pianist Steve Barry moves back into swing mode, with a light flexing touch. Dickeson articulates the rhythm, as he commands the dynamics and keeps the groove pliant in tandem with the beat steady bassist Alex Boneham.

Billy Strayhorn's " Isfahan " is made all the more consummate by McNelis. His tone is beautiful as it delves into the soul of the tune and makes it glow with the warmth of his approach, letting the notes seep and linger or elongating then with unbridled passion. Barry is the other wing, lending an accomplished presence with his winsome playing.

Dickeson and Boneham grab hold of Charlie Parker's "Big Foot" and turn it into a happy interaction. Drums and bass engage in conversation, a little call and response, before they go out on the lope together. It's downright engaging fun.

Parker's "Relaxin' at Camarillo" is a solo slot for Dickenson. Here is a drummer who knows how to make rhythm stand up and exult. The patterns he creates are bright and brisk with the traps and the cymbals singing in consonance.

Dickeson weaves his dreams with flair and imagination turning this first record into a delight and the beacon for more.