BY MARK CORROTO
February 18, 2013
Sign in to view read count 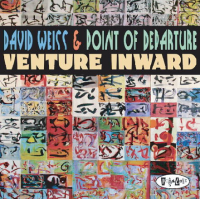 If music can be described as either masculine or feminine, then recordings by trumpeter David Weiss and his Point of Departure quintet are simply testosteronic. Built upon the legacy of trumpeter Miles Davis' second great quintet and saxophonist Billy Harper's Black Saint inheritance, Weiss presents dexterous arrangements of muscular, second wave hard bop music.

This studio session, Venture Inward, was recorded in 2008, one day before the stunning live date at the Jazz Standard, released as Snuck In (Sunnyside, 2010) and Snuck Out (Sunnyside, 2011), with follow-up pieces made the following June for all three releases.

While duplicating four tunes heard on the live discs, these studio sessions do not lack for that in-person sensation. Weiss' arrangements are tight and deceptively simple. Drummer Tony Williams' "Black Comedy" starts with the Miles In The Sky (Columbia, 1968) sound of the original, but expands out toward Williams' quintets of the late '80s and early '90s. Drummer Jamire Williams and bassist Luques Curtis power JD Allen's brawny tenor saxophone and the nimble fingers of guitarist Nir Felder. This macho music is felt in the rush of "Number 4," with Weiss drawing equal parts from trumpeters Freddie Hubbard and Lee Morgan.

Much like the septet, The Cookers that Weiss organizes around hard bop veterans Billy Harper, trumpeter Eddie Henderson, saxophonist Craig Handy, bassist Cecil McBee, pianist George Cables, and drummer Billy Hart, Point Of Departure is a younger version, with perhaps a bit more fire in its belly. Weiss chooses pieces by pianist Herbie Hancock ("I Have A Dream"), and two each from Chicago pianist Andrew Hill and Detroit trumpeter Charles Moore. Weiss is able to simplify Hill's often abstract pieces and proffer them within the post-bop tradition. This band loves its music to be brawny and powerfully robust.