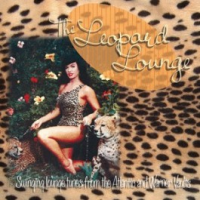 If you enjoy the TV series Mad Men, you are going to love The Leopard Lounge Box Set. Probably.

You need to go know what you are getting into. Should you be offended by the thought of guitarist Barney Kessel hanging on to a tremolo arm and twanging out George Gershwin's "Summertime," or cornetist Nat Adderley fronting a cheesy, Vegas-style big band arrangement of Tony Hatch's "Call Me," then The Leopard Lounge is not for you. Step away from the cocktail cabinet. For compared with much of the music in this 5CD collection, most of it recorded in the early and mid 1960s, Kessel's and Adderley's tracks, from 1961 and 1966, are exemplars of good taste. Just like the Betty Page cover shot.

At the other end of the quality scale—a relatively short distance away, it must be said—is some truly frightful music. And yet, even at its worst, there is in 2012 a curious appeal in The Leopard Lounge's mélange of finger-clicking supper club vocals, smoothly swinging "jazz," deracinated R&B and bossa nova, and exotica from the Atlantic and Warner vaults. Even Max Esquivel's mutiliation of Cole Porter's "I Get A Kick Out Of You" (1962), with a brass arrangement so outlandish it might have been written by Sun Ra on really bad acid, or Ananda Shankar's sitar-for-beginners reading of Mick Jagger and Keith Richards' "Jumpin Jack Flash" (late period lounge, recorded in 1970), have a certain charm.

Why is this? Partly, it is because you cannot keep a good tune down, and these discs are packed with good tunes. Partly, it is because it is increasingly piquant to hear music made on "real" instruments in "real" time, with minimal post-production and mostly orchestrated for medium-sized or large ensembles. And partly, the recordings are social history from a long-gone era. It is all delightfully anachronistic, right down to the titles of the exotica albums on which some tracks were originally released, such as Don Ralke's The Savage And The Sensuous Bongos (Warner Bros., 1960) and Les Baxter's The Primitive And The Passionate (Reprise, 1961). They don't title them like that anymore, thankfully.

In addition to Barney Kessel and Nat Adderley, The Leopard Lounge includes many other jazz musicians acting more or less reprehensibly—among them Duke Ellington's orchestra, small groups led by drummer Shelly Manne and flautist Herbie Mann, and singers Carmen McRae, Ella Fitzgerald, Ray Charles, Jon Hendricks, Chris Connors and Betty Carter. Most of the tracks are unashamedly commercial and few, if any, would make it to a legacy list; Manne's "Daktari," from 1967's eponymous Atlantic album, and Ellington's "Blue Moon," from Ellington '66 (Reprise) just might, if the lists were long. And British singer George Melly's "Roll 'Em Pete," from Son Of Nuts (Warner Bros., 1973), is unbuttoned, rocking joy. Lounge music is frequently called louche, and Melly was the real deal: he changed the lyric here to read "I got a girl way up on the hill...and if she won't, I know her brother will." Forty years ago, that was quite daring.

The big omissions from the cast list are singer Frank Sinatra and the singer/songwriter partnership of Dionne Warwick and Burt Bacharach, three icons of lounge. Given that many of the tracks here are taken from albums released on Reprise, which Sinatra set up in 1960, his absence is doubly strange. In his place, there is plenty of Bobby Darin and Mel Torme. Warwick and Bacharach do actually get one track, "Alfie," from Heartbreaker (Warner Bros., 1967), but once is not enough. Copyright issues presumably prevented more tracks being included.

Taken one disc and several cocktails at a time, The Leopard Lounge Box Set is a lot of fun.