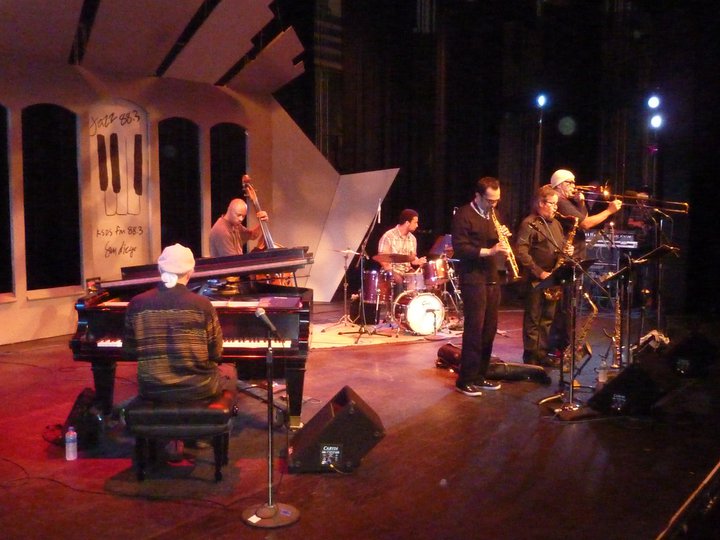 Pianist Theo Saunders has an incredible resume. Growing up in NYC, he played with Pharoah Sanders in the 1960s, and in 1971 (at age 24), at the Village Vanguard with the likes of Jimmy Garrison and Jack DeJohnette in a group led by guitarist Sonny Greenwich. Appearing on more than 40 recordings as a sideman, he has accompanied everyone from Sonny Fortune and Charles Lloyd to Freddie Hubbard and Ray Mantilla, and has six recordings as a leader.

The sextet Saunders brought to the Saville Theatre was wisely assembled with a view toward balance. Jeff Littleton on bass, David Dahlsten on trombone and Chuck Manning on tenor all have years of working experience at the highest level. Part of the pianist's genius, though, was in recruiting Zane Musa on reeds and Tony Austin on drums, two guys in their early 30s who are both alumni from the Cal Arts music program and burning with the fire of youth.

Musa has recently scored a gig with Cuban expatriate trumpeter Arturo Sandoval, and it was easy to see why—he's got a similar sense of manic, muscular energy. Drummer Austin played with a relaxed, but explosive verve, and it was impossible not to think of Tony Williams and Jack DeJohnette as he propelled the group forward on his highly charged engine.

The band led off with Saunders' unique arrangement of country music legend Merle Travis' "16 Tons." It was Tennessee Ernie Ford meets Oliver Nelson, as there was a strong dose of "Stolen Moments" in this adaptation.

After dispensing with the sumptuously voiced melody, Musa attacked the changes with a barely contained energy. His ideas came out with such bold alacrity, it was like they were chasing each other out of his alto saxophone. Manning followed with the opposite idea: ever patient, his calm, centered tone belied the increasingly coiled, scalar repetitions that built toward a quiet climax.

Saunders' solo began with incremental melodic gestures that grew in length while being supported by perfectly placed chordal accents. He built tension with right-hand trilling that eventually erupted into two-handed block chords that brought the spirit of McCoy Tyner to mind. Littleton's spot was groove-centered as he broke up long chromatic phrases with steady bits of walking bass, sticking primarily with the low, meaty tones.

Cole Porter's "It Ain't Necessarily So" was next, featuring the pianist's light, inventive comping behind Musa's animated soloing. Suddenly the band dropped out and Austin emerged with a thunderous, roiling drum solo. By the time he had wrapped it up, the audience was roaring its approval.

Other highlights included the lush ballad "Queen Of Tangents" Saunders dedicated to his wife, who was in attendance. A title like that might have sparked some marital discord, but the tune was so lovingly performed that another outcome was far more likely. Manning's honey-toned tenor hush rolled over Littleton's huge whole notes, which sang out in a rich baritone. The other horns drew long drawn pitches that wrapped around the melody and Saunders' perfectly placed chords.

"Free South Africa" utilized the three horns in a joyously voiced harmony, then somewhere in the middle, the band slipped into a rock-solid mambo type groove that reminded the listener that Saunders has got tons of Latin music experience under his fingertips.

The Les Brown standard, "Comes Love" was done in a semi-reggae arrangement, a well deserved opportunity for Dahlsten's trombone to shine as he delivered the melody in a gruff staccato, then unwrapped an exquisite solo that felt like Roswell Rudd meeting Frank Rosolino in a Jamaican nightspot.

It all came to an end with a 21st Century take on the Dixieland aesthetic—all three horns soloing at once over the martial, snare drum second-line grooving of Austin on the pianist's nod to post-Katrina New Orleans, "When The Saints Go Out."