Duke Ellington And His Orchestra: The Treasury Shows, Volume 19 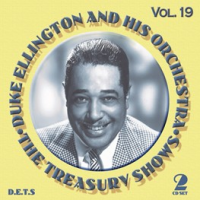 In 1946 the uneasy truce between industry and organized labor in the U.S.A which had persisted for the duration of World War Two came to an abrupt end. Coal miners and railroad workers came out on strike and jazz bands were banned by the American Federation of Musicians under its autocratic boss James C. Petrillo from broadcasting live.

In such acrimony, the swing era was over. The big bands of Benny Goodman, Woody Herman, Artie Shaw, Tommy Dorsey, Les Brown, Harry James, Jack Teagarden and Benny Carter all called it a day. That the Duke Ellington Orchestra was able to survive was largely as a result of the special exemption it was granted by Petrillo to play a series of radio shows promoting the sale of US Treasury bonds.

As part of the deal, The American Broadcasting Company had its announcers repeat like a mantra references to "the cooperation of the American Federation of Musicians, James C. Petrillo, president."

Transcriptions of these literally passée shows on CD provide modern listeners with a unique opportunity to hear Ellington earning his living, demonstrating his patriotism by plugging the Treasury bonds and building his band's future.

For, as William McFadden points out in his informative sleeve note, Ellington was in the process of creating three bands in one. There would be a concert band to play his longer "works"; a jazz band boasting some of the best soloists of the day; and a dance band for any survivors of the swing era who still felt like cutting a rug.

The embryonic concert band is represented here with "Diminuendo And Crescendo In Blue," as two movements either side of "Transblucency," featuring Kay Davis's marvellous wordless vocal. American Broadcasting Company announcer Bernie Mack, while never once mispronouncing the hallowed name of James C. Petrillo, manages to rename Ellington's works, "Diminuendo And Crescendo In Blues."

The jazz band plays a swinging arrangement of the Earle Warren number "9:20 Special" by ex-Basie sideman, trumpeter Buck Clayton. And there are plenty of numbers for people who remember how to dance, "Three Cent Stomp" and "Fancy Dan" to name but two.

Whenever things threaten to flag, there's always Ray "Floor Show" Nance. His relaxed vocal on "Just A-Sittin' And A- Rockin'" puts to shame Al Hibbler, Ellington's regular male vocalist. Hibbler managed to sound stiff and pompous no matter what he sang. Here his vocal on "Flamingo" is mercifully cut short as the tape runs out.

Let's not forget the real star of the show, Edward Kennedy Ellington. Duke's in great form here, and when it comes to plugging the Treasury bonds, he adds a human touch by describing how "Sally Brown's father" is buying them to give to his daughter on her wedding day, while "a guy called Joe" is handing out cigars to celebrate the birth of his son then buying the bonds that will pay for the boy's education.

Ah yes, those were the days... and all thanks to the American Federation Of Musicians, James C. Petrillo, president.

Take The A Train; Just A-Sittin' And A-Rockin'; 9:20 Special; I Can't Get Started; Flamingo; Fancy Dan; Diminuendo in Blue; Transblucency; Crescendo In Blue; Someone; Three Cent Stomp; I'm Just A Lucky So- And-So; Barzallai Lew; The C Jam Blues; Do Nothin' Till You Hear From Me; Subtle Slough; Take The A Train.