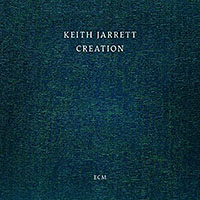 It's been four years since pianist Keith Jarrett, an ECM recording artist since the early '70s, last released a solo piano recording, 2011's Rio. While Rio's more consistently buoyant, optimistic nature reflected similar changes in Jarrett's life, it was not a recording that, for example, ranked as highly as Concerts: Bregenz / Munich , issued, in 2013, in its entirety for the first time on CD since its original 1982 vinyl release.

Jarrett's well-documented encounter with Chronic Fatigue Syndrome in the mid-to-late '90s put a halt to the pianist's legendary ability to deliver uninterrupted performances of Herculean strength and length, documented on albums like his still-popular Köln Concert from 1975. Still, the pianist's return to solo piano performance shifted successfully to sets consisting of shorter pieces rather than one long, uninterrupted drawing of form from the ether. Despite some fans pining for the days of releases like the massive Sun Bear Concerts (1978) box, which documented five performances in Japan from 1976, some of his post-CFS recordings absolutely stand alongside his '70s solo work, an example being 2009's marvelous Testament—Paris / London.

And so, with Jarrett turning 70 this year, he is releasing two albums. One is a New Series classical recording of piano concertos by Béla Bartók and Samuel Barber (along with a short encore from an undated Tokyo solo show). The other, more auspiciously, a solo piano set that, in the decades since the pianist stopped recording most solo and group recordings in the studio, is unlike any other in his discography. The aptly titled Creation culls nine improvised pieces from six different performances in four cities and five halls. What's most remarkable about this recording is that it feels like a pre-CFS solo performance. Absolutely uninterrupted it is not. There are occasional brief moments of silence between the pieces, simply titled "Part I" through "Part IX," though each piece also indicates where and when it was recorded. What Jarrett has done, however, is to find improvisations that feel as if they were coming from a similar mindset and musical headspace. The pianist then sequenced them to give the impression of a single, contiguous, 73-minute performance.

And it is Jarrett who is responsible for the sequencing. Unlike most ECM recordings, which are sequenced by label head/primary producer Manfred Eicher, Creation was, indeed, sequenced by the pianist, who assumes the title of Producer this time around, with Eicher listed solely as Executive Producer. This concept of drawing on multiple performances to create a new whole is a fresh venture for Jarrett, and one that has raised some questions—doubts, even. But for those looking forward to this recording, it's not likely they'll be disappointed. For those who have, curiously, written it off on principle before even hearing it? They may well find themselves more than pleasantly surprised.

Jarrett's solo performances in recent years have, despite always starting with a blank slate, become a tad predictable. There's always a handful of jagged improvisations more akin to a contemporary classical music than anything resembling the jazz tradition. A sampling of something either hints at or more strongly reflects Jarrett's love of gospel and Americana. And invariably, there are pieces that, coming from the blues, feel more overtly jazz-like. Mixed up within these various improvisations there's always a combination of sparse playing that makes silence a most important musical partner, along with exhilarating bursts of virtuosity, two qualities (and the knowledge of precisely when to use them) responsible for positioning Jarrett as one of the most important pianists of the last half of the 20th century and the first decades of the 21st.

With Creation, however, Jarrett eschews all such predictable constructs with a program that's largely dark and brooding, heavily based on chordal constructs and sparse melodies, and the absolute antithesis of overt virtuosity...even though only a pianist with the kind of exceptional mastery of his instrument as Jarrett could create a suite such as this. It's a suite that, impeccably mastered, possesses dynamics ranging from the softest pianissimo to the most dramatic fortissimo. There are brief periods where Jarrett lets his virtuosity shines through, such as the beginning of "Part V," but only for the shortest of passages, as the pianist settles into some of the album's most poignant, lyrical moments.

It's moments such as these—moments of unerring beauty, where Jarrett proves capable still of drawing song form out of nowhere—that ought to make even the most jaded Jarrett fan realize that, with Creation, his best years are far from behind him, recorded, as these five performances were, within the past 12 months. He may no longer be capable of creating the kind of long-form performances that he used to in real time, but with the seamless narrative of Creation, perhaps there is value in the artifice of the studio, where an artist can examine hour upon hour of live performance and choose pieces that go together, hand-in-glove, to create their own bold, brooding, beautiful and absolutely harmonious whole.