Home » Jazz Articles » The Philly Pops Big Band with Terell Stafford and Guests at the Ki... 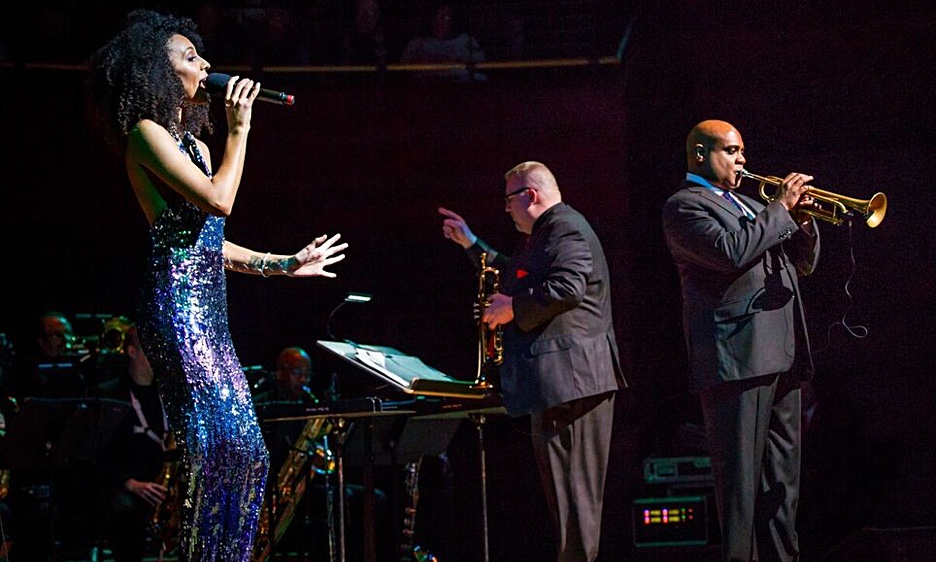 The Philly Pops wide-berthed orchestra includes some of the finest working jazz musicians in the city. The Pops' lead trumpet chair, Matt Gallagher, periodically assembles them as the "Philly Pops Big Band" for events such as the "Welcome America" July 4th celebration. This was the second of three performances of their first formal concert gig, and they went all out with special guest trumpeter and emcee Terell Stafford, along with vocalists Alita Moses and Dee Dee Bridgewater, to provide a colossal afternoon of lively, fulsome big band arrangements, inspired solo improvising, and vocal renditions, all of which had special significance for Philly's deep history of swing and bop music. On top of that, bassist Christian McBride (who came of age in Philadelphia and whose father Lee Smith was bassist for the two other performances) made a guest appearance, performing his arrangement of "Blue Monk" for three upright basses (!) with the band's own Steve Beskrone and a young man named Dan McCain, who is making waves in the city these days. The concert's energy level bordered on musical hysteria, controlled only by the discipline and skill of the band members and their guest artists.

The power of the band's playing and arrangements came through immediately with the kickoff tune of Cole Porter's "I've Got You Under My Skin." The sheer sound and pulse of the ensemble was at the very high end of the big band spectrum, as were the lyrical, virtuosic solos by Gallagher and Stafford. The big spatiality of their sound, like that of the others in the band, perhaps comes from the fact that they have orchestral experience. The Philly connection is that the tune was often played by Clifford Brown, who frequented clubs in the city and was mentored by Fats Navarro here.

The next two numbers brought everyone's attention to lead saxophonist Ron Kerber, who took a killer flute solo on Benny Golson's "Killer Joe," and then soloed on alto saxophone on his arrangement of a Grover Washington, Jr. favorite, "Just the Two of Us," with Alita Moses coming on with the vocals. Like Clifford Brown, saxophonist Washington spent a few key years of his life in Philadelphia a decade or so later. He became such a legend here that a school in North Philadelphia is named after him, and a mural portrait of him is there as well.

A strangely up-tempo version of "Summertime" which almost turned it from a sultry ballad into a train on a collision course was rescued from destruction by an ultra-hot tenor saxophone solo by Sean Bailey on tenor sax, with unique twists, turns, and slurs that made it high art, alluding perhaps to the child in the lyrics ("Hush little baby, don't you cry...") Then, Benny Golson's "I Remember Clifford," composed when he was grieving the loss of his trumpeter friend, was virtually sung on Gallagher's trumpet, a very moving rendition of this memorable song.

Singer Alita Moses, a University of the Arts music alumna who is garnering attention around the U.S. and in Europe, emerged on stage with sultry versions of two songs by famed singer/songwriter Jill Scott, born and raised in Philadelphia: "Golden" and "A Long Walk." Moses interacted with the band and took on the diva role, while her singing was beautifully controlled in less demonstrative swing vocalist idioms, at times strikingly similar to Nancy Wilson. She took on "They Say It's Wonderful" and "All of Me," finishing up with a version "to die for" of "Good Morning Heartache" which was also highlighted by trombonist Randy Kapralick's solo with connotations of the great Frank Rosolino.

Stafford then introduced Christian McBride, who in turn pointed to fellow-bassists Steve Beskrone and Dan McCain. The three performed McBride's unique and uncanny arrangement of "Blue Monk," with stunning improvising by all three, often contrapuntally. Then the band broke out into a Count Basie-like swing version of the tune, capping off the first set.

The second set began with what was possibly the most original composition/arrangement of the show: Bill Cunliffe's "Overture for Dizzy," which recapped Dizzy Gillespie's originals, including "A Night in Tunisia." Stafford's virtuosic extensive solo wisely did not choose to imitate Gillespie but did incorporate the latter's bebop swift improvising and forays into the high register. Stafford then dedicated "Candy" and "You Go to My Head" to Lee Morgan. Then attention was drawn to the tenor saxophone with "My Shining Hour" from the album Coltrane Jazz (Atlantic, 1961), one of Trane's first outings after leaving the Miles Davis Quintet and going on his own. Chris Farr soloed magnificently, again, like Stafford, in his own way (but of course influenced by Trane).

By now, the audience was chomping at the bit for Dee Dee Bridgewater, and she gave them everything they could ask for. She has quite a sense of humor, coming on seductively with Stafford and a few others with Oscar-worthy dramatic realism. But she quickly got down to business with a fantastic all scat version of Duke Ellington's "Cotton Tail" that artfully dismembered this tune, which in its own day was a breakthrough song with rhythmic intricacies that anticipated much of the jazz to come. Bridgewater followed up with two Ella Fitzgerald favorites, "Mr. Paganini" and "Lady Be Good," concluding with a song written for Billie Holiday, "Lady Sings the Blues" and the hauntingly beautiful Holiday-composed "God Bless the Child," which Bridgewater transformed into a virtual dramatic suite which wouldn't have fit on one of Holiday's 78 rpm records, or Lady Day might have done the same.

Set List: I've Got You Under My Skin; Killer Joe; Just The Two of Us; Summertime; I Remember Clifford; Golden; A Long Walk; They Say It's Wonderful; All of Me; Good Morning, Heartache; Blue Monk; -Intermission-Overture for Dizzy; You Go To My Head; My Shining Hour; Cotton Tail; You'll Have to Swing It, Mr. Paganini; Oh, Lady Be Good; Lady Sings the Blues; God Bless The Child.