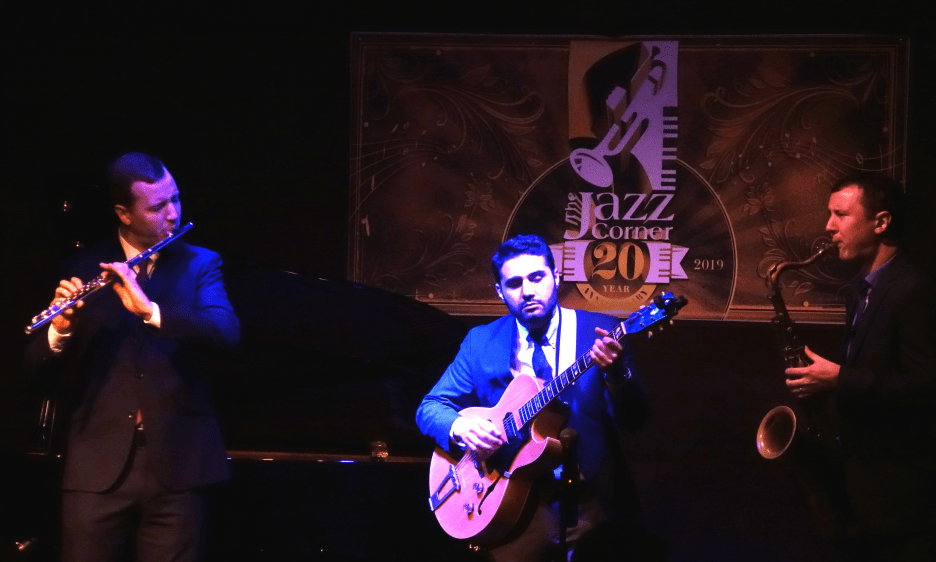 Eight instruments on stage and only three musicians seemed like a challenge, particularly as the guitar was the only instrument played by Adam Moezinia. The other instruments were all for twin brothers Peter and Will Anderson at The Jazz Corner on Hilton Head Island. A George Gershwin medley led the way with "But Not For Me" followed by "Rhapsody in Blue" (see the video below with Felix Lemerle on guitar). The Twins changed instruments throughout synchronizing tightly together, while the Gibson guitar carried the rhythm at times picking a solo, as the reeds covered the groove. Each brother stepped aside and ceded the stage to the other when they were playing in turn; at times they played in unison, at times in harmony varying instruments and treatments while always finishing each piece with precision. There was no time lapse as the music passed between them, not a beat, not even half a breath. It was telepathic and seamless.

A 1933 Foxtrot followed, it must have been "MoonGlow" way up in the blue, it must have been Moonglow that led me straight to you, a Benny Goodman favorite from a time before the clarinet fell from popular favor. They reached further back to 1918 for another Goodman clarinet classic "After You've Gone," rendered slowly and in unison.

Will took up the mellow flute for the wistful "These Foolish Things" remind me of you, both brothers were willing to blow rhythmic background during Moezinia's guitar solo. The Anderson trio admire original Appalachian music, which was paired with Blues and Hillbilly to form the Country genre. They commissioned a new piece of music written by Kyle Athayde and titled "Appalachian Mountain Song" where both clarinets set up continuous low notes as a background drone to the melody being picked country-style on the guitar. Switching roles, the clarinets took turns to make repetitive runs at the melody while the guitar kept rhythmic knee slapping hoe-down time. And on to Broadway to the Blackbird Revue for "I Can't Give You Anything But Love, Baby" an interwoven conversation spliced between two tenor saxophones building in intensity to a key change.

At the break Peter revealed a new album to be released May 15th with Jimmy Cobb who he recalled was drummer on Kind of Blue (Columbia, 1959) with John Coltrane on alto and Cannonball Adderley on tenor saxophone, Bill Evans piano and Paul Chambers bass, while Miles Davis played his modal music. The Anderson twins made their recording over a year ago. Cobb is now ninety-two years old but Peter said he still drums well.

The trio opened the second set with "Blue Skies," nothing but blue skies, then asked the question, won't you come along with me, down the Mississippi, to "Bourbon Street Blues." Duke Ellington was the next for a medley visit with the tenor saxophone laying out the bass line for a fluted "Caravan" and on to "Mood Indigo" before "Just Squeeze Me." Then a discordant dual clarinet glissando led the trio into the early Harlem Jungle music tune "The Mooch." Back to Goodman for the title track from Seven, come eleven those craps game winners, with Charlie Christian, guitar (Concord Jazz,1974) and south to Brazil to hear Antonio Carlos Jobim's bossa nova "Chega de Saudade" also known as "No more Blues." Back to The South and the Savannah River, the "Moon River '' separating Georgia and the Carolinas, immortalized in Breakfast at Tiffany's by Henry Mancini with lyrics by Johnny Mercer. The trio ended up in Oklahoma! with "The Surrey With A Fringe On Top .''

The Anderson Trio gave a well received something-for-everyone performance following the Ellington pattern of using multi-instrumentalists of quality, (the trio all trained at Julliard). The conversations were intuitive and as tight as we might expect from the special synergy between twin brothers, the guitar kept the rhythm and added excellent solos. It made a pleasant change to listen to standard melodies played intricately on a variety of instruments without drums. The guitar was enough rhythm and allowed the woodwind and reeds to shine through.