By Tom Greenland
May 9, 2009
Sign in to view read count
Representative of what has been coined the "new" jazz studies, these two books are compilations of critical essays edited by Graham Lock and David Murray, which investigate and unpack the role and influence of jazz and blues in African American culture. 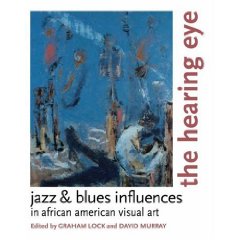 Most of the pieces in The Hearing Eye focus on painters, including Ellen Banks, Jean-Michel Basquiat, Romare Bearden, Wadsworth Jarrell, Norman Lewis, Sam Middleton, Joe Overstreet, Rose Piper and Bob Thompson. Other media are represented in the work of photographer Roy DeCarava, quilter Michael Cummings and the anonymous illustrations found on early blues sheet music and in newspaper ads for "race records". To provide a complementary viewpoint, two musicians (Jane Ira Bloom and Marty Ehrlich) discuss how their work has been influenced by painters. The volume features many attractive plates, supplemented by additional artwork and relevant musical tracks available on the press website. In seven interviews interspersed among scholarly essays, Lock repeatedly attempts to elicit statements that show how jazz directly influences visual art, but his subjects typically resist being "put...in a pocket" (p. 127) as "black" or "jazz" artists, emphasizing instead the universality of their personal aesthetics. Considered as a whole, however, the book makes a convincing case that these artists share much common ground with jazz, particularly in reference to racial politics, a propensity for improvisation and the high value placed on developing a distinctive personal "voice." 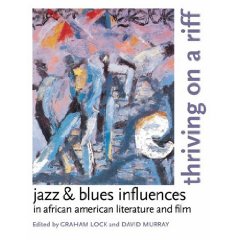 Thriving on a Riff explores similar connections in the realms of fiction, biography, poetry and film. Even if "translating" jazz, an aural "language," into writing or visual imagery with any pretense of precision is inherently impossible (as any honest critic will admit), the authors nevertheless provide a stimulating variety of literary perspectives on jazz. Bertram Ashe's article on Paul Beatty, for example, suggests that the poet's lack of punctuation and indeterminate line-breaks create a call-and-response dynamic, compelling the reader to "swing" the poem and "lending an improvisational sensibility to the narrative at large" (p. 113). Other highlights include poet Michael S. Harper's insightful reflections on saxophonists John Coltrane, Eric Dolphy and Dexter Gordon, co-editor Murray's deconstruction of the false dichotomy between material and spiritual aspects of jazz, John Gennari's close reading of Ross Russell's pulp novel based on saxophonist Charlie Parker and Krin Gabbard's discussion of trumpeter Miles Davis' (part ghosted) autobiography. All told, these companion volumes offer a provocative and nuanced cross-disciplinary approach to jazz in particular and art in general.