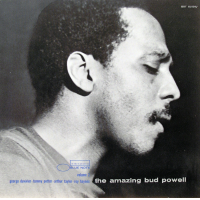 In the pantheon of bebop's Founding Fathers, there are three giants. Everyone knows Charlie Parker and Dizzy Gillespie. Everyone forgets Bud Powell.

Fortunately, these two early Powell discs emphasize the quirky, fun, inventive Bud Powell. While no pianist was ever quite as quirky and original as Thelonious Monk, Powell might place a close second.

The two CDs chronicle three recording sessions from 1949, 1951 and 1953—first a quintet of traditional bop with Fats Navarro and Sonny Rollins, second a trio with Roy Haynes or Max Roach on drums, and third (all of disc 2) a trio with bassist George Duvivier and Art Taylor. All are fun.

The highlight of Volume 1 is three takes of the Powell original "Un Poco Loco" with the Roach trio. I'm not a fan of alternate takes—too often they're too alike—but here you can actually hear the evolution of a classic. On Take 1, Powell is clearly fumbling around with his solos, trying anything, mostly short snippets that go nowhere. Eventually, he gives up. On Take 2, Powell is obviously running with new ideas. And on Take 3, he's got it—a final, finished product. No melodic excursion here. With Roach doing a Latin-tinged tap-a-tap-a-tap tap on the cymbals, Powell creates odd flourishes and angular riffs. It is, in short, unique—an overused word, but in this case, apt.

The highlight of Volume 2 comes on the very first two tunes. "Autumn in New York" starts with a furious, stormy pounding of chords and sheets of rain in the right hand, followed by a pretty melody and wonderful interplay between the piano and bass. The very next tune, "Reets and I," is the kind of jaunty, toe-tapping bop that makes 1950s jazz so much fun.

Yep, I said "fun" three times. These are fun records. Parker was fun, Gillespie was fun, bebop is fun. What's wrong with that?