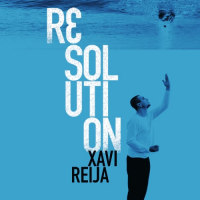 Catalan drummer Xavi Reija's fifth recording and his first with MoonJune Records is a highly charged affair that draws from rock, jazz and the shifting ground between. Reija's hard-edged polyrhythms, bassist Bernat Hernandez' thundering bass lines and guitarist Dusan Jevtovic's raw, fuzz-toned electric guitar combine to stir up a storm that evokes memories of drummer Tony Williams' Lifetime and mid-seventies King Crimson. That, however, is only half the story, for a meditative, slow-burning quality reigns at times while ambient loops and effects lend a psychedelic hue to music that waxes and wanes.

Reija and Jetovic's collaboration goes back a decade in the drummer's electric quintet, which Hernandez has also been a member of since Ritual (Indi Records, 2008) so it's no surprise that the trio here is so tight and yet also plays with unabashed freedom. A generous hour and fifteen minutes is divided between longer tracks—weighing in around the ten-minute mark—of coiled tension and explosive release and shorter, punchier fare that goes straight for the jugula. Reija's balladic sensibility comes forth on the lovely, brushes-led "Land of the Sirenians"—the most overtly jazz-influenced track and an island of repose in the middle of all the cut and thrust.

The trio lays down an impressive marker on the opening track, "Flying to Nowhere"; a strong melodic head introduces a ruminative passage, which simmers slowly before erupting into flowing interplay, returning full circle to the opening motif with Reija on hand percussion. Hernandez swings between the fluid melodicism of bassist Gary Willis and the more visceral rock aesthetic of former Crimson bassist John Wetton. His bubbling bass funk on "Macroscope" has shades of Weather Report, though the noise-cum-feedback mid-section and the scratchy guitar psychadelia of the finale—beneath propulsive drumming—highlight the trio's modern, urbane underbelly.

An underlying lyricism pervades the music, even at its rawest, and greater emphasis is placed on textures than exhibitionism. There are flashes of the distorted, flaming guitar improvisations that peppered Jevtovic's excellent Am I walking Wrong? (MoonJune Records, 2013), for example on the slower, highly melodic "Shadow Dance" and on the rocking "John's Song," but in the main the guitarist applies broad, impressionistic strokes on the canvas in the form of drone-like sustain, coruscating fuzzy feedback and loop-filtered effects, as on the powerful avant-rocker "Dreamer," or light, jazzy lines on the groove-heavy "Gravity." He also deals in some terrifically nasty power chords and greasy riffs on the dub-rock scorcher "Abyss."

Fans of guitar-driven Indie rock will lap up the pulsating "Unfinished Love," which features nimble drum work and the brooding rhythms of the bass-heavy "John's Song." Both those tracks veer temporarily into ambient territory, whereas longer compositions like "Resolution" and the noodling, somewhat fractured "Welcome to the End" are largely structured around ambient-groove explorations that eschew exclamative dynamics.

Resolution's strengths lie in Reija's ability to fuse raw power and lyricism, dissonance and melody. The playing is first rate throughout and one comes away wondering just how much more powerful this music would surely be on stage. Whether it's avant-jazz or alt-rock hardly matters. What does matter is that this absorbing performance signals the arrival of a sophisticated power trio like few others.