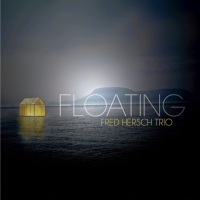 Live albums and studio albums can by miles or millimeters apart in terms of presentation, conception, quality, layout and reception; it all depends on the circumstances and intentions when a record is made. Pianist Fred Hersch's Floating, for example, nearly erases that potential divide.

While it's against his very nature, Hersch could've haphazardly thrown together a random list of tunes and gone into the studio cold, using an ad hoc group to flesh out this album. In the end, he did the exact opposite. Hersch took his rightfully acclaimed working band—the Fred Hersch Trio—into the studio right after a run at New York's Village Vanguard, the recording sight of his two previous records. Then, he put together a playlist that mimics the nature of one of the trio's live sets, starting with a standard, moving on to originals, throwing in a dose of classic balladry, and ending with a taste of Monk. The end result is a studio album that sits well next to the pianist's live dates.

The aforementioned album-opening standard is "You & The Night & The Music." Here, this warhorse is transformed by the ceaselessly choppy-and-rolling, Latin-inflected 12/8 feel that the trio adopts. Restlessness and respect are the two qualities that shine through as Hersch and company stay faithful to the music in certain ways, yet remain consistently on the move. The title track comes next, occupying a completely different space; it lives up to its name as it drifts and glides along.

Hersch's penchant for penning tributes is well-known at this point, so it should come as no surprise that this album contains more than its fair share of such pieces. Hersch pays respects to his mother and grandmother with a brief episode of beauty ("West Virginia Rose"), tips his cap to this group's bassist—John Hebert—with a swampy-and-groovy show ("Home Fries"), and delivers an airy and loosely flowing tribute to gone-too-soon pianist Shimrit Shoshan ("Far Away"). Other works in this category include a dynamic-yet-sensitive nod to bassist Esperanza Spalding ("Arcata"), a gentle piece written in honor of Finnish artist Maaria Wirkkala, and a swirling, almost-swinging piece for pianist Kevin Hays ("Autumn Haze"); Hersch and Hebert fall into line on that last one, but drummer Eric McPherson cunningly circumvents the feel for the majority of the tune.

The end of the journey—a gorgeously enthralling take on "If Ever I Would Leave You" and a hip run through Monk's "Let's Cool One—further illustrates Hersch's genius and the rapport that exists between these three simpatico travelers.