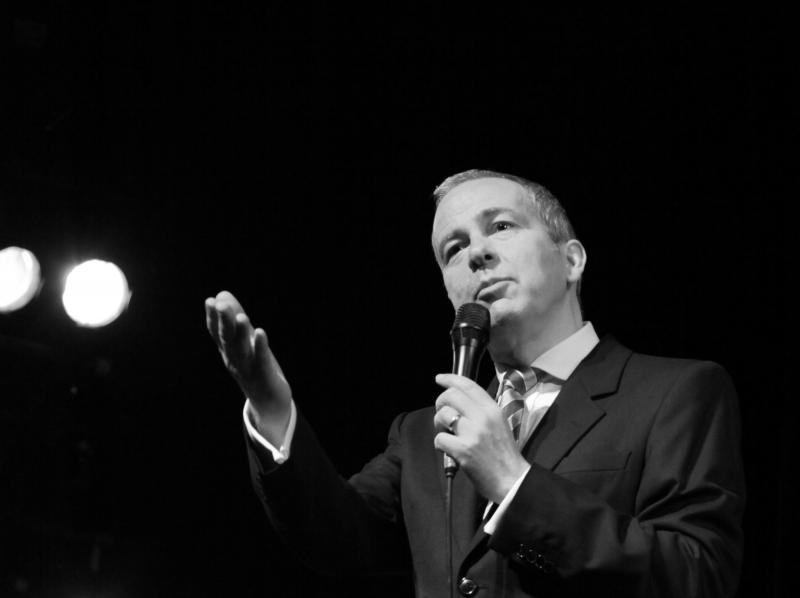 In just a few years, Todd Gordon has established himself as "one of Britain's most popular singers and entertainers" (Scottish Television). An avid Beatles fan until the age of 11, his musical horizons broadened when he heard Frank Sinatra's Songs for Swingin' Lovers! album. From that moment, he collected almost every recording by Ol' Blue Eyes whilst expanding his interest in jazz and swing, encompassing numerous other renowned singers and instrumentalists.

Further inspiration came in 1975 when he met Ella Fitzgerald prior to one of her shows. During her concert, she invited him onstage and sang "You Are the Sunshine of My Life" specially to him. Since then, Gordon has been fortunate enough to meet many more of his idols—including Bing Crosby, Rosemary Clooney, Count Basie, Woody Herman, George Shearing and Tony Bennett.

Gordon's interest in music and singing was passionate, yet always private. But in 2000, he took part in a week-long vocal jazz workshop and that changed everything. His stage debut came in 2001 at Scotland's top jazz club and from that moment on, as the cliché goes, he's never looked back.

In 2003, aged 44, he was booked to open for Dionne Warwick during her UK tour, which prompted him to give up his day job organizing trade expos. Since then, Gordon has performed frequently at Britain's top jazz venues, including The Pizza Express Jazz Room, The 606 in Chelsea and the world-renowned Ronnie Scott's Jazz Club in London and The Plaza and The Algonquin hotels in New York—where he even did a duet with actor Christopher Walken, singing "I've Got You Under My Skin."

He also features regularly at major jazz festivals and concerts. Indeed, he was the first-ever Scottish male vocalist to be booked for the London Jazz Festival, with his performance at the Royal Opera House in 2007—a show which was followed by a sell-out return visit two years later.

Gordon's audiences range from intimate jazz clubs to large-scale shows (he regularly compères and performs at "Jazz on a Summer's Day" against the backdrop of Edinburgh Castle—Britain's biggest jazz event with an audience of 20,000-plus) and he was also one of four nominees for a national music award alongside classical conductor Ilan Volkov, the pop group Texas and singing sensation, Annie Lennox. Gordon has performed joint concerts with most of Britain's best female jazz singers including Jacqui Dankworth, Claire Martin, Clare Teal, Elaine Delmar, Tina May, Juliet Roberts and others, as well as American singers Barbara Morrison and Clairdee.

He works with the very best musicians and has released three albums with Ian Shaw in the producer's chair: Love's Illusions, Ballads from The Midnight Hotel (with Guy Barker and featuring a duet with Jacqui Dankworth), and Moon River to the Days of Wine and Roses—an album celebrating the work of the legendary American Songbook lyricist Johnny Mercer, with the acclaimed Mel Torme pianist, John Colianni.

His latest release (reviewed on this site by both Ian Patterson and Bruce Lindsay) is a big band swing album with the Royal Air Force Squadronaires entitled Helping the Heroes. A further release is scheduled for 2013, an album Gordon recorded in Seoul after one of his tracks was used as the theme song in a top Korean TV drama series.

Further expanding his passion for music, Gordon set up a concert promotion business, Jazz International, which has staged almost 100 events at Scotland's leading music venues. In addition, he's been presenting several weekly radio shows, one of which is syndicated worldwide.

As a live performer, Gordon's concerts appeal to a wider audience than just jazz lovers, however. He has created several crowd-pulling, and audience-pleasing concert themes, which have won five-star reviews. Lineups for these range from a top flight trio to the superb BBC Big Band, the renowned Ronnie Scott's Jazz Orchestra and award-winning Back to Basie Orchestra. Along the way, many respected songwriters have praised Gordon's interpretations of their songs, including the legendary Mike Stoller, the hugely successful Gilbert O'Sullivan, the co-composer of Sinatra's "Watertown" masterpiece, Jake Holmes, as well as fêted composer, Stephen Sondheim.

I realized there was the possibility I could be. Up till then, it'd had seemed nothing more than a pipe dream.

Direct, honest, unfettered, and open to all sorts of influences/experiences.

To open their minds and ears.

Focusing on those alive today, there are so many great musicians I have (or have had) the opportunity to work with, but I'd love to perform with giants such as Monty Alexander, Tamir Hendelman, Joey Baron, Eric Gunnison and Alan Broadbent}.

There are several humorous moments that I savor, including the time that a lady came up to me after a show to tell me how much she and her friend had enjoyed the show, followed by, "In fact, my friend said you're just like Tony Bennett." Before I could say that was very flattering, she added, "Yes, she saw Tony Bennett perform last year—and he had really shiny shoes as well!"

Whilst it's been thrilling to perform in large concert halls, the most memorably intimate gigs have been in a tiny venue situated in the most northerly, and very remote, part of Scotland. It's called the Lyth Arts Centre and can seat around 60 people. It is very well-equipped, and boasts a beautiful Steinway grand and a great sound system. But more importantly, it is run with such passion by its owner, William Wilson.

Probably the first duet I ever recorded. It's a version of Gordon Lightfoot's lovely song, "If You Could Read My Mind," with singer (and dear friend) Jacqui Dankworth. I have very fond memories of the recording session, which was produced by Ian Shaw.

I hope that I am introducing rarely-performed gems from the Great American Songbook to listeners who are unfamiliar with relatively obscure numbers. And reacquainting people with standards, whilst trying to give them a fresh yet respectful treatment.

Worldwide release of the new big band album I have recorded with the Royal Air Force Squadronaires. It features several duets and its UK release has been reviewed on All About Jazz by Ian Patterson and Bruce Lindsay.

"Portrait of Mahalia Jackson,"by Duke Ellington and His Orchestra, from The New Orleans Suite. And perhaps, as the last song, "I'll Be Seeing You."

Todd Gordon - one of Britain's leading jazz and swing singers