Born in Harpenden, Hertfordshire, England, Elaine was raised in a musical environment in North London. Her father, Jamaican-born trumpeter Leslie 'Jiver' Hutchinson and mother, Phyllis, came to Britain in the mid1930's and Leslie became a much-loved musical influence in the 40's and 50' as a jazz soloist and band leader. Elaine was undoubtedly influenced by her musical surroundings and remembers warmly a household bustling with visiting musicians playing, rehearsing and talking about music or simply listening to the sounds of Basie, Ellington, Sarah Vaughn, Ella Fitzgerald or Nat King Cole from her father's record collection. Her mother Phyllis was renowned for her hospitality and for keeping a warm and stable household which Elaine feels has grounded her to this day.

Brought up in North London, the eldest of three children, brother lvor and sister Maria, Elaine was educated at Rhodes Avenue Junior School and then Trinity Grammar School, Wood Green. She studied classical piano privately from the age of 6, completing the Associated Board Exams and becoming a well-recognized face on the North London Music Festival circuit. Elaine actually made her first broadcast at 13 on BBC radio's Children's Hour. Whilst still at school at the age of 16, she became a singer with her father's band at functions and at US Air Force Bases around Britain until his untimely death in a car accident in 1959.

Elaine's first legitimate stage appearance was in a revival of Finian's Rainbow in the late 50's at the New Shakespeare Theatre, Liverpool. She then became a member of a group called The Dominoes before starting her solo career on the working men's club circuit, mainly in the north of England and touring overseas in cabaret. From the early '60s, Elaine made several appearances on the London stage in such musicals as No Strings, Cowardly Custard and Bubbling Brown Sugar (with Billy Daniels), The Wiz and Jerome Kern Goes to Hollywood (1985) which marked the centenary of the composer's birth. This show ran both in London and on Broadway after which Elaine made her New York cabaret debut at the Ballroom in New York.

Elaine's recording career began in the early 60's when she recorded various albums for one of her early champions, producer Denis Preston of Lansdowne Records. The first was an EP titled “A Swinging Chick” featuring the wonderful talent of Victor Feldman. Amongst her other albums, Elaine has also released the highly-acclaimed “Elaine Sings Wilder” a tribute to one America's lesser known composers, Alec Wilder. This album has become something of a collector's item. The pianist and musical director on this record was Colin Beaton, one of Elaine's mentors and early musical influences. She later went on to make a double album for Denis Preston entitled “Elaine Delmar and Friends” featuring Tony Coe, Alan Branscombe, Eddie Thompson and Pat Smythe, another great influence on Elaine's musical life.

Elaine's more recent recordings “S'Wonderful, Nobody Else But Me” and “But Beautiful” have all featured Brian Dee, the much-respected jazz pianist and accompanist with whom Elaine has been working for the past 20 years. Strangely enough Elaine and Brian first met when Elaine was still a teenager and he would visit Elaine's home with his father. In the late 70's Elaine played the part of the Bohemian Princess in Ken Russell's film Mahler, the film biography of Gustav Mahler. In 1983 she appeared at London's National Theatre in David Hare's highly acclaimed play, Map of the World.

Elaine's musical path has taken her in many directions. She has made numerous radio and television broadcasts and concerts singing with small groups, big bands and symphony orchestras around the world, starring with Michel Legrand, Stephane Grappelli, Andy Williams, Benny Carter and Herb Ellis to mention but a few. Equally at home in a concert hall, night club or theatre, Elaine thrives on communicating with her audience. In 2006, Elaine was nominated for the Radio 2 'Artist of the Year' in the BBC Jazz Awards.

A great deal of Elaine's working year these days is spent touring the world, quite often working aboard some of the world's top luxury cruise ships. She believes these ships have become the new vaudeville. One of the high points of Elaine's working year is her annual engagement at Ronnie Scott's Jazz Club in London. Having worked there once a year for the past sixteen years, Elaine still finds it one of the most challenging and stimulating of all the venues to work. Show less 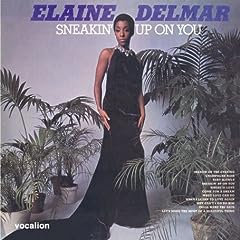 Sneakin' Up On You

All About Jazz musician pages are maintained by musicians, publicists and trusted members like you. Interested? Tell us why you would like to improve the Elaine Delmar musician page.